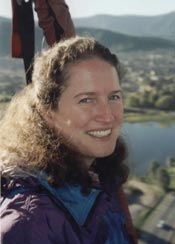 India Wood joined Sky Publishing in July 2000 as the Electronic-Publishing Manager. She directs the planning, development, and ongoing management of products in electronic media, including the new Web site launched in January 2002. She is an avid amateur astronomer and general admirer of the natural sciences.

India began work at age 16 at the Denver Museum of Nature and Science as a paleontological field assistant on the team that excavated an allosaurus she'd found a few years earlier. She then attended Dartmouth College and earned a degree in English literature with an unofficial minor in billiards. India's publishing career began at Houghton Mifflin company, where she traveled throughout Africa and the Caribbean for several years marketing textbooks, trade books, and educational tests. For formal business training she attended the Massachusetts Institute of Technology, where she earned an MBA in business strategy and product development. Since MIT, India has specialized in the world of electronic media, both in her work at NewsEdge Corporation and FEN.com, and as an occasional guest lecturer at universities in the Boston area.