See images and video from NASA’s Osiris-REX spacecraft as it samples the Nightingale site.

The Osiris-REX team got a good look at the TAGSAM sampler head on Friday, October 23rd: based on the images, the team suspects that the compartment is indeed full of at least 60 grams' worth material, though smaller particles are escaping from a partially exposed gap in the mylar flap. Based on this, the team has decided to forgo this weekend's spin test to weigh the material, and simply stow the container.

After more than a year and a half of exploration and mapping from afar, NASA’s Origins, Spectral Interpretation, Resource Identification, Security, Regolith Explorer (Osiris-REX) spacecraft descended to the surface of asteroid 101955 Bennu, extended its TAGSAM (Touch and Go Sampling) arm, and — for six seconds — touched the surface of the asteroid.

The following video shows the event (sped up) via a combination of 86 images taken by the SAMCAM imager throughout the maneuver.

The event occurred 200 million miles (321 million kilometers) from Earth on Tuesday, October 20th, a few minutes ahead of schedule. The team received confirmation of the TAG (Touch and Go) maneuver via the worldwide Deep Space Network at 6:08 p.m. EDT (22:08 Universal Time).

“This amazing first for NASA demonstrates how an incredible team from across the country came together and persevered through incredible challenges to expand the boundaries of our knowledge,” says NASA administrator Jim Bridenstine in a recent press release. “Our industry, academic and international partners have made it possible to hold a piece of the most ancient solar system in our hands.”

This wasn't exactly a “soft-landing.” The spacecraft approached the surface at a slow 0.2 mph (10 cm/second), then fired a powerful burst of nitrogen gas at the regolith while maintaining contact with the asteroid for about 5 to 6 seconds, before firing its thrusters and backing away at about 0.9 mph (40 cm/second).

NASA TV aired the event live, airing confirmation data coming back from the spacecraft. But downlinking all the images took a bit more time. NASA gave us our first good look at the sampling event on Wednesday night. Not only did the 1-foot (0.3-meter) wide sample head appeared to blast the porous rock on contact, but the nitrogen burst seems to have created a fresh new crater in Bennu.

The team hinted on Wednesday that there are also wider views from the spacecraft taken by the NAVCAM 2 imager, something we may see soon, showing the overall context of the event.

Now, the team has to analyze the Touch-and-Go Sample Acquisition Mechanism (TAGSAM) and ‘weigh’ the spacecraft to see what if any material it might have been collected during the brief moment of contact.

Next Steps for Osiris-REX

On Thursday October 22nd, the team will turn the TAGSAM sample head towards the OCAMS SamCAM imager and peer inside. The sample head is also ringed with contact pads lined with stainless steel loops, designed to collect particles smaller than a millimeter in size. With any luck, the contact pads will be coated with dark black regolith.

“We do have some great indications that where we gathered the sample from on Bennu is relatively young, it looks like it has a color that’s reddish, and that might indicate a more recent exposure age,” says Dani DellaGiustina (University of Arizona) during Wednesday night’s press conference. “There was also evidence of the presence of organic molecules and carbonates, so we believe [the sample] will have carbon material.”

The spacecraft is currently on a hyperbolic trajectory outbound from Bennu, a motion it will arrest on Friday, October 23rd, when it will fire its thrusters to station keep with the asteroid in solar orbit.

Then, on Saturday October 24th, the team will slowly spin the spacecraft with the sample arm extended, in an effort to weigh the resulting mass including the collection sample. This has already been done earlier in the mission with the container empty, to establish a baseline measurement.

The goal is to collect a minimum of 6o grams (2.1 ounces) of regolith, about the weight of an alkaline C-battery. The spin analysis test is accurate to within about 20 grams: if the final measurement is 80 grams, the team will have 90% confidence that the target mass was achieved, and no further sampling is needed.

If the mission hasn't collected enough, the plan is to sample the secondary Osprey site on January 4, 2021. Osiris-REX cannot return to Nightingale, as the spacecraft has already disturbed the site and could have potentially contaminated the samples with its thrusters.

Osiris-REX has enough nitrogen for three sampling attempts. The gravity field of the half-kilometer asteroid is so feeble that it takes Osiris-REX weeks to get back into orbit for another attempt if needed.

AI and Citizen Science Team Up

Just approaching the boulder-strewn surface of Bennu was a feat for the Osiris-REX team: the spacecraft had to slip past a two-story-high boulder nicknamed "Mount Doom" to hit a clear slot of surface about the size of two parking spots. Because the mission is 18.5 light-minutes from Earth, it navigated approach all on its own. Though the final target was much smaller than the mission’s initial 50-meter-wide requirement, Osiris-REX hit the surface within a meter of where it was supposed to.

Citizen science also came into play, as the CosmoQuest Bennu Mappers program had mapped and cataloged every boulder on Bennu's surface leading up to the TAG event.

Once sample capture is confirmed, Osiris-REX will stow its precious cargo, depart Bennu, and eject the capsule for recovery over the Utah Test and Training Range on September 24, 2023.

Once on Earth, a quarter of the sample will go to the mission's science team. Partners at the Canadian Space Agency will receive 4%, and the Japanese Aerospace Agency (JAXA) will receive 0.5%. The remainder will be preserved as legacy samples, available to researchers for decades to come as investigative technology advances.

Bennu is in the "potentially hazardous" class of asteroids and will pass by Earth in 2060 at twice the Moon's distance. It has a small (1-in-2,700) chance of Earth impact late in the 22nd century. It’s amazing to think that Bennu may once again be in the news in decades and centuries to come, when humanity remembers that brief moment we visited this tiny world way back in 2020.

Japanese Hayabusa2 samples from 162173 Ryugu asteroid is expected to return to Earth on 6 December 2020, landing in the Australian outback. United States and Japan plan to share these samples from OSIRIS-REx and Hayabusa 2 by an agreement signed by NASA and Japan Aerospace Exploration Agency. This is NASA's insurance if OSIRIS-REx failed/s. It is critical because of the race to exploit mineral resources from asteroids. ["Bennu is in the "potentially hazardous" class of asteroids and will pass by Earth in 2060 at twice the Moon's distance." is malarkey IMO. This isn't the true goal of these missions at all.]

OSIRIS-REx risks losing asteroid sample after it sample door jams as I write this. I also note NASA hasn't stated this on NASAs OSIRIS-REx webpage. To quote the team on Twitter though, "So much sample was collected that some of it is actually slowly escaping the sampling head." Fake news, or something more serious??? 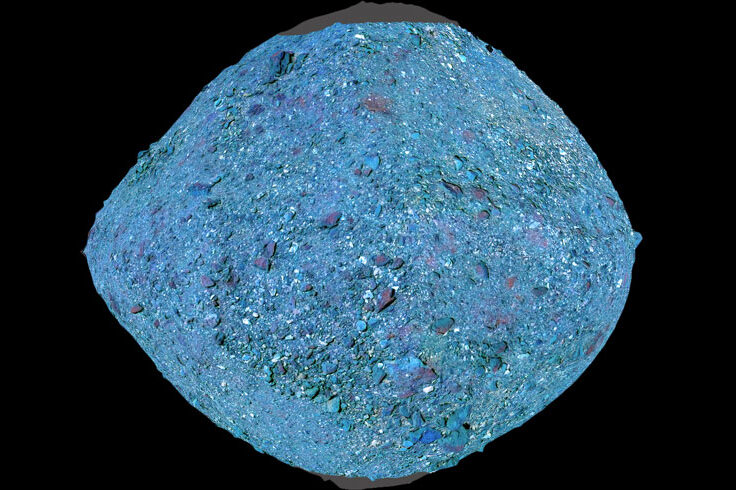 Osiris-REX Finds Some of Solar System's Oldest Rocks on Bennu

Osiris-REX Finds Hints of Past Water on Asteroid Bennu