A Long March 5 rocket roared to life early this morning at 12:41 a.m. EDT / 4:41 UT, launching from the Wenchang Space Center in the Hainan province of China. It carried the second Mars mission of 2020: Tianwen 1. (The spacecraft's name means “questions to heaven,” from a poem by Chinese poet Qu Yuan.)

“The Tianwen 1 mission is a major landmark project in the progress of building China’s aerospace power, and a milestone project for China’s aerospace to go further and deeper into space,” says Wu Yangsheng (China Aerospace Science and Technology Corporation) in a press release.

The mission is an ambitious first for any space agency: an orbiter, lander, and rover all in one package. The China National Space Administration (CNSA) provided only sparse information about the mission leading up to and during the launch, which was live-streamed by offsite spectators and the national Chinese broadcast network CCTV.

Chinese officials lifted the news blackout shortly 36 minutes after launch and declared that Tianwen 1 had successfully entered a heliocentric trajectory for a seven-month journey to the Red Planet.

China sends its first mission to Mars. Tianwen-1 was launched from Wenchang towards the red planet on a voyage that will last until next year. #Mars pic.twitter.com/9PmlzHCoEe

This was the fifth launch for China’s heavy-lift Long March 5 rocket, needed to hoist the 3,400 kg (7,500 lb) spacecraft into a Marsbound trajectory. The Long March 5 is China’s answer to staying competitive with SpaceX’s Falcon Heavy rocket, currently in operation, and NASA’s SLS rocket, slated to launch in late 2021. While a Long March 5 rocket failed shortly after a July 2017 launch, due to a first stage engine malfunction, the revamped rocket was back in business after a test run in late 2019.

Now, the stage is set for China to perform another first for the nation. In February 2021, the spacecraft will enter an elliptical polar orbit around Mars that's 265 by 12,000 kilometers (165 by 7,500 miles). From that vantage point, Tianwen 1 will survey the Red Planet with a suite of instruments, including a medium- and high-resolution camera, energetic and neutral particle analyzers, a magnetometer, a mineralogy spectrometer, and survey radar.

Of prime interest for the orbiter is a survey of the Utopia Planitia region of Mars, where the mission's lander and rover are expected to touch down. This is the same region that NASA’s Viking 2 visited in 1976. About two to three months after orbital insertion, the lander will separate from the orbiter and descend for an attempted soft-landing on Mars.

A successful landing would make China the third nation to do so, after NASA, which has carried out eight successful landings, and the Soviet Union, whose Mars 3 lander operated for a scant 110 seconds on the surface before falling silent.

China’s last bid for Mars, the Yinghuo 1 spacecraft, burned up along with the doomed Russian Phobos-Grunt mission when it reentered the Earth’s atmosphere on January 15, 2012. China has had more success on the Moon, where it has fielded two rovers: Chang’e 3, landed in Mare Imbrium in 2013 and Chang'e 4 made the first lunar farside landing in January 2019. China hopes to perform a lunar sample return with its Chang’e 5 mission later this year.

The Utopia Planitia region is suspected of containing a huge reservoir of water ice. The solar-powered rover is expected to operate for 90 days on the Martian surface and has a suite of cameras and instruments, including the first ground-penetrating radar ever fielded on the surface of Mars.

Much of what we know about the technical and scientific aspects of the Tianwen-1 mission comes from a paper published by chief scientist Wan Weixing in Nature Astronomy. Find out more about the mission's goals in Emily Lakdawalla's feature article, "Three Missions Head for Mars."

China’s successful launch comes just a few days after United Arab Emirates launch of their Hope orbiter on Monday. Next up in the Mars launch queue is NASA’s Perseverance rover, set to launch from Cape Canaveral on July 30th.

The launch comes at a time of strained relations between the U.S. and China. China is one of the few major players in the modern space exploration game that does not partner with the United States, due mainly to standing International Traffic in Arms Regulations restrictions, which ban the U.S. from sharing technology with China.

It will be exciting to watch the dawn of 2021, as three new missions arrive at the Red Planet. Congratulations to the Tianwen 1 team on launching an ambitious all-in-one package to explore Mars.

This mission brought to you by technoogy stolen from the United States of America.

You should check your history regarding: "The mission is an ambitious first for any space agency: an orbiter, lander, and rover all in one package."

Incorrect the USSR was the 1st to launch an orbiter, lander and rover to Mars all in one mission. Mars 2 and Mars 3 in 1971, both orbiters worked. The Mars 2 lander/rover crashed while the Mars 3 lander/rover made it to the surface but communications were lost shortly thereafter possibly due to a dust storm.

do you have any evidence? 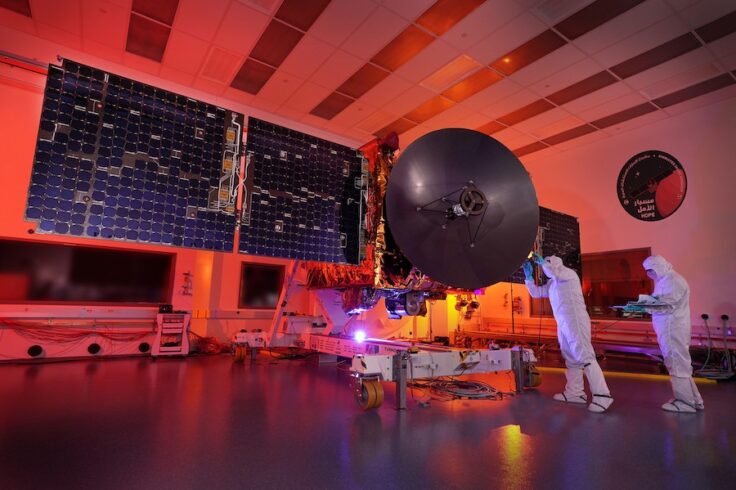