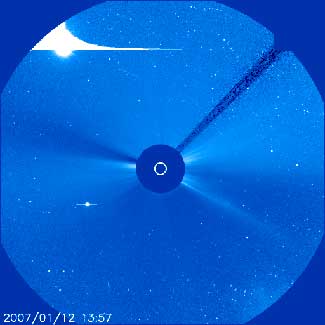 Comet McNaught enters the field of the SOHO spacecraft.

Comet McNaught will come closest to the Sun today, so seeing it in dawn or dusk from a hilltop may prove difficult. But as predicted, the comet has now entered the field of view of the Solar and Heliospheric Observatory (SOHO). You can see it in the real-time images at the newly redesigned
SOHO website.

At the time of this note, it's at the upper left of the "LASCO C3" image, shining bright enough to saturate the detector and produce a big smear. The view probably won't improve for that reason as it slips through the field — not a pretty view, but an interesting one. (The spacecraft's camera occults the Sun in order to see the streamers of the corona. The Sun's location is represented by the circle in the middle of the frame.) The other bright object to the lower left of the Sun is Mercury.

Come back to the SOHO site later to watch the movies that are assembled from the individual frames (the links are at the bottom of the real-time images page).