My recent comparison of 15x70 binoculars against a 70-mm refractor left me somewhat dissatisfied. On the one hand, it seemed that I'd unfairly crippled the telescope by restricting its aperture to 70mm. Is it really fair to ask one 70-mm objective to do the same job as two? On the other hand, though small, short-focus refractors have become amazingly cheap, most are still significantly more expensive than 70-mm binoculars once you include the mount, finder, eyepieces, and so on. 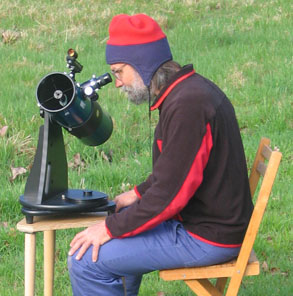 Once it's set on a stand, the Starblast's short tube and adjustable viewing angle make it extraordinarily comfortable to look through. I felt silly posing for this picture in broad daylight, but I discovered that cumulus clouds are actually quite interesting at 15X.

But as luck would have it, I own a telescope that's cheaper than most 70-mm refractors and also gathers a lot more light. I bought it largely because my daughter thought it was cute — which it certainly is — but I fell in love with it the first time I looked through it. I'm referring to the Orion Starblast, a 4.5-inch f/4 reflector on a pseudo-Dobsonian mount. Insofar as a full-featured telescope can be like binoculars, this telescope is. The only thing I can think of that comes closer is the Edmund Astroscan. These are instruments that put a premium on simplicity, ease of use, low cost, and wide-field, low-power views — exactly the strong points of binoculars. Of course, being full-fledged telescopes, they can also be pumped up to magnifications far beyond anything that normal binoculars can achieve.

Last Friday I spent the hour between dark and moonrise comparing my 15x70 binoculars against the Starblast. I used eyepieces with 30-mm, 25-mm, and 7-mm focal lengths, yielding 15X, 18X, and 64X respectively. I wanted to use the 30-mm because its magnification precisely matches the binoculars, but this is really too low a power for this telescope. That's because it delivers a 7.5-mm exit pupil, which is bigger than most peoples' eyes can make full use of. My own eyes open to somewhere between 5.5 and 6 mm, meaning that the Starblast is effectively reduced to a scope with roughly 85-mm aperture when I use it at 15X. The light from the outermost 29 mm of aperture falls on my iris and never reaches my retina.

Because a star is so distant, all the light rays from it are essential parallel. The rays that hit a telescope's objective form a cylinder called the entrance pupil. The objective bends this light into a cone that reaches focus at a single point and then diverges again. The eyepiece bends the rays back again to form a narrower cylinder called the exit pupil. When this is wider than your eye's pupil, the rays from the outer edge of the objective (shown in red) are blocked by your iris.

In case you didn't understand the point in my previous blog, this is precisely why the only way to improve the view at ultralow magnification is with binoculars.Once the exit pupil exceeds your eyes' pupils, increases in aperture have no effect at all. The only way to get more light to your retinas is to use a separate objective for each eye.

So how does a 15x85 monocular scope compare with 15x70 binoculars? Objectively — comparing the features that I could see through each instrument — the views are strikingly similar. Subjectively, they could hardly be more different. Viewing with two eyes while facing directly toward my subject draws me into the scene; I feel as though the sky is all around me. Though I've always thought of the Starblast as a "reach out and touch the sky" instrument, looking down into its eyepiece seems clinically detached compared to the immediacy of binocular viewing. 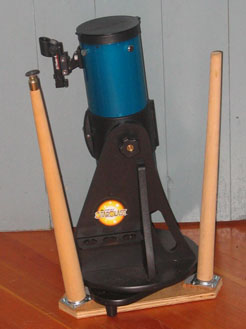 Starblasts are fully assembled and usable right out of the box, with one exception. When the scope is placed on the ground, its eyepiece is too low even for a small child to reach comfortably. You can put it on a folding picnic table, but that will undermine the scope's otherwise extraordinary stability. I built this three-legged table as a compromise between steadiness and portability; when not in use, the Starblast nests inside its legs.

On the other hand, even on the slightly wobbly stool shown at right, the Starblast is vastly steadier, and moves more smoothly, than binoculars on any but the priciest mounts. And viewing objects high in the sky — always a problem with standard binoculars — is easy and painless with the telescope.

Once I put the 25-mm eyepiece into the Starblast, it pulled far ahead of the binoculars — which is hardly surprising. I was then using nearly all of the Starblast's aperture, and while 15x70 binoculars do fine compared to a 15x85 monocular, they can't compete with an 18x100 monocular. Yes, the field of view at 18X is smaller than at 15X — but it's still very big indeed. As far as I'm concerned, this loss is minor compared to the huge increase in brightness and definition.

And at 64X, a solid, conservative magnification for deep-sky observing through a 114-mm telescope, the Starblast enters a new dimension. NGC 3628, the faint member of the Leo Triplet, which is subtle with averted vision at 15X, becomes bold, bright, and well-defined.

What's my conclusion? Measured in terms of the astronomical features you can see for the money you spend, a small, richest-field reflector like the Starblast is so far ahead of big binoculars that the comparison is ludicrous. But subjectively, there's nothing quite like seeing a bright, wide sky vista with both eyes.

That is not to say that the value of having a good pair of binoculars on hand while observing is lessened in any way.

15x binoculars were not made to coax fine detail out of faint celestial objects. They can however, make a superb companion to a finder on a telescope.

Tony responds: Indeed, I almost always take binoculars when I'm observing with a telescope. For a scope in the Starblast range, 7X or 10X binoculars seem more appropriate than 15X, since the Starblast can achieve 15X just by changing the eyepiece. But I can easily imagine using 15X binoculars to supplement the views through an 8-inch or 12-inch scope.

I always use my celestron 15x70 binos to scan my targets before zeroing in wirh my Starblast. With a 24mm televue panoptic finder EP, I'll look over the target before deciding if I need or want to go to a higher power EP, then I just keep tweaking untill its just right, then I'll decide if its better with the binos or the telescope, meaning if you can afford it use BOTH!

Shawn Haggerthy wrote:
"I always use my celestron 15x70 binos to scan my targets before zeroing in wirh my Starblast"

Yes, also from didactic point of view, when you show sky to the people who see any astro-objects for the first time it is really appealing to them when they first see Orion's M42 or Jupiter through binoculars and only later look through bigger scope.

You have given us a nice comparison between binoculars and a small scope. Many of us own both binoculars and scopes and have formed our own opinions based upon the instruments accessible to us.

You have presented some valuable information for every observer--both new and old.

For some reason, my 22x70 William Optics bino outperforms my 102mm William Optics refractor on almost all extended deep sky objects. Of course, the refractor kills the bino on moon and planets. But there is just nothing like those binos for breath taking views of the Milky Way, open clusters, and nebulae!

One point not mentioned. The Starblast mounted on a proper table is one of the convenient instruments I have used; the eyepiece seems to always be in a comfortable position. Binoculars are always awkward unless the object in near the horizon. A chaise could be used, but swinging in azimuth requires on to get up, move the chair, etc. Plus you got to hold the binos. Right angle binos help, but cost BIG bucks.