Carl Murray: Cassini at Saturn – The End of an Era 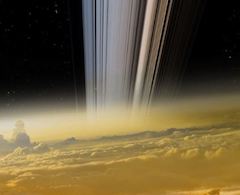 The Cassini mission to Saturn ended on 15 September 2017 when the spacecraft entered the planet's atmosphere. Launched in 1997 as part of the NASA/ESA/ASI Cassini-Huygens mission, the spacecraft had been in orbit about the ringed planet since 2004 sending back a wealth of data about the planet, its moons and its vast ring system.

The talk will highlight some of the discoveries made by Cassini in its 13-year tour of the ringed planet. These include observations of giant storms on Saturn, changing weather and surface features on Saturn's largest moon Titan, the discovery of plumes of ice particles emanating from a source of liquid water beneath the moon Enceladus, as well as the discovery of several new moons.

The presence of a spacecraft in orbit for more than a decade has given scientists the opportunity to study how the system has changed over time. The last part of the talk will focus on Cassini's discoveries about the planet's ring system and the mission's Grand Finale.

Speaker Details:
Carl is a Professor of Mathematics and Astronomy at Queen Mary University of London. He is a planetary scientist who is interested in the motion of all objects in the solar system, from dust to planets, and he has co-authored the standard textbook on the subject, 'Solar System Dynamics'.

In 1990 he was selected as a member of the camera team for the NASA/ESA Cassini-Huygens mission to Saturn and he worked on the project until the demise of the spacecraft in September 2017. Carl is particularly interested in the dynamics of Saturn's rings and their gravitational interaction with small moons.

He is also an Associate Scientist on the camera team for ESA’s forthcoming JUICE mission to Jupiter and Ganymede.