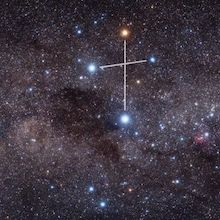 Having been guest astronomer in the Namib Desert on several occasions, I got to know the Southern Hemisphere skies fairly well. I learned much about what sorts of night-sky objects were of most interest to the many visitors to the lodge, as well as discovering some 'star lore' from local Namibians. Here we take a brief tour of the most southerly constellations and deep-sky objects of beauty and interest, including the history of constellation names and exotic deep sky objects, both from the perspective of indigenous peoples across the Southern oceans as well as the historical explorations of the Southern World by the early Northern Hemisphere nautical explorers. Modern day images from some of world’s best telescopes, as well as some of my own humble photos will reveal some of the most beautiful objects to see in the Southern skies. So if you've never been to the Southern Hemisphere, or maybe if you visited there a long time ago or more recently, come along and find out about what I consider to be the most beautiful and inspiring area of the entire night sky. After the tea-break there will also be a short, five-minute fun 'Generation Game'-style free-for-all quiz! Caroline's interest in the stars has taken her to such far-flung places as Namibia, where she was guest astronomer at a luxury lodge in the heart of the Namib Desert and closer to home, Chichester, where she has been involved with the South Downs Planetarium for over ten years. When Caroline is not stargazing, she is teaching guitar to children or riding her motorbike!