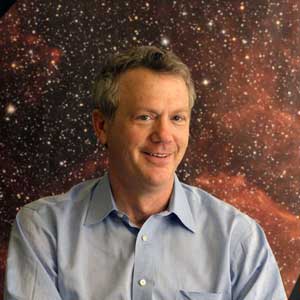 Dr. Robert Kirshner (Harvard University) will give a free, illustrated, non-technical talk on:
Einstein’s Blunder Undone: The Runaway Universe in the Smithwick Theater at Foothill College, in Los Altos. The talk is part of the Silicon Valley Astronomy Lecture Series, now in its 16th year.

Just 100 years ago, Einstein invented a new theory of gravity called "General Relativity" and applied it to the study of the universe as a whole. To match astronomers' understanding at the time, he introduced the Cosmological Constant, a factor that would guarantee the entire universe itself was static – neither expanding nor collapsing. In the following decade, astronomers showed the universe was not static at all, but expanding, and Einstein banished his constant, even calling it his greatest blunder. However, in the past 20 years, astronomers have shown that the universe is not only expanding, but speeding up. What drives this cosmic acceleration? We call it the Dark Energy, but it might be very similar to Einstein's idea from a century ago. In this talk, Dr. Kirshner will show the methods used to discover the cosmic acceleration and present the evidence that we live in a Universe that is only 4% matter like the atoms of the periodic table, w ith the balance divided between dark energy, speeding up the universe, and equally mysterious dark matter, drawing things together.

Robert Kirshner is the Clowes Professor of Science at Harvard University. This year he is on leave at the Gordon and Betty Moore Foundation in Palo Alto, heading their science program. He has been a leader in the use of supernova explosions to chart the expansion history (including the acceleration) of the Universe, winning the 2015 Wolf Prize in Physics for this work. At Harvard, he served as Astronomy Department chair and taught a large undergraduate course for non-science majors. A frequent and popular public speaker on science, he is also author of the popular-level book "The Extravagant Universe: Exploding Stars, Dark Energy, and the Accelerating Universe.”

The lecture is co-sponsored by:
* The Astronomical Society of the Pacific
* The SETI Institute
* NASA Ames Research Center
* The Foothill College Astronomy Program.

Past lectures in the series can be found on YouTube at http:// www.youtube.com/SVAstronomyLectures