Free Public Talk on the Science of Star Wars 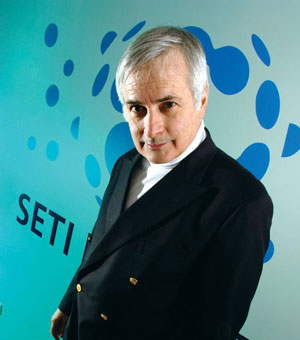 Dr. Seth Shostak of the SETI Institute will give a free, illustrated, non-technical talk on:
“The Science of Star Wars: The Lowdown on Space Travel, Aliens, and the Force”

in the Smithwick Theater at Foothill College, in Los Altos.
The talk is part of the Silicon Valley Astronomy Lecture Series, now in its 17th year.

Many people assume that our descendants will join a galaxy-wide, multi-world society similar to that portrayed in the “Star Wars” franchise. And given the possibility that at least some aliens could be aggressive, interstellar conflict – as seen in science fiction movies – doesn’t seem implausible. But are these films at all realistic? Will we ever become a space-faring society, and can our descendants look forward to sharing a brew with odd-looking extraterrestrials in an otherworldly cantina? Or does “Star Wars” completely miss the mark from a scientific point of view? In this family-friendly talk, Dr. Shostak, one of our most popular public speakers, will separate the science from the fiction in the most successful space franchise of all time.

Seth Shostak is the Senior Astronomer at the SETI Institute, and holds degrees from Princeton University and the California Institute of Technology. In addition to professional publications, he has penned over five hundred popular articles on astronomy, technology, film and television. He chaired the International Academy of Astronautics’ SETI Permanent Study Group for a decade, and each week hosts the SETI Institute’s hour-long, science radio show, “Big Picture Science.” He has written, edited and contributed to a half dozen books, including a textbook on astrobiology and the popular Confessions of an Alien Hunter: A Scientist’s Search for Extraterrestrial Intelligence.

The lecture is co-sponsored by:
* The SETI Institute
* The Astronomical Society of the Pacific
* NASA Ames Research Center
* The Foothill College Astronomy Program.

Past lectures in the series can be found on YouTube.