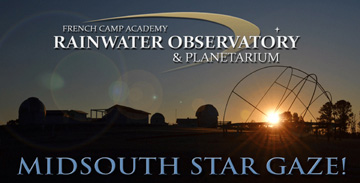 Rainwater Observatory is gearing up for its annual Midsouth Stargaze and Astronomy Conference coming up April 6-9, 2016! This event attracts amateur and professional astronomers from around the country. It is held under one of the darkest skies in the southeastern United States and just off the beautiful Natchez Trace Parkway near the village of French Camp, Mississippi.

Rainwater is home to one of the largest collections of powerful telescopes in the southeast. We have some new exciting indoor exhibits and beautiful custom built exhibit cases with an impressive new meteorite collection. The exhibits contain objects such as a Mars meteorite, a large shatter cone, tektites and a piece of the Chelyabinsk meteorite that hit Russia in 2013! In addition, we have exhibits featuring an impressive collection of rocks, minerals asteroid models and other astronomy related displays.

We have a large camping area with a pavilion, picnic tables, men’s and women’s showers and bathrooms, WIFI access, all new electrical outlets on the hill, 14 bed air conditioned bunk house, four grills and five campfire pit areas with surround seating as well as other camping areas around the observatory hill. There is a Bed and Breakfast, Council House Cafe, Lodge, Memphis Guest House and other additional lodging located within a mile of the observatory.