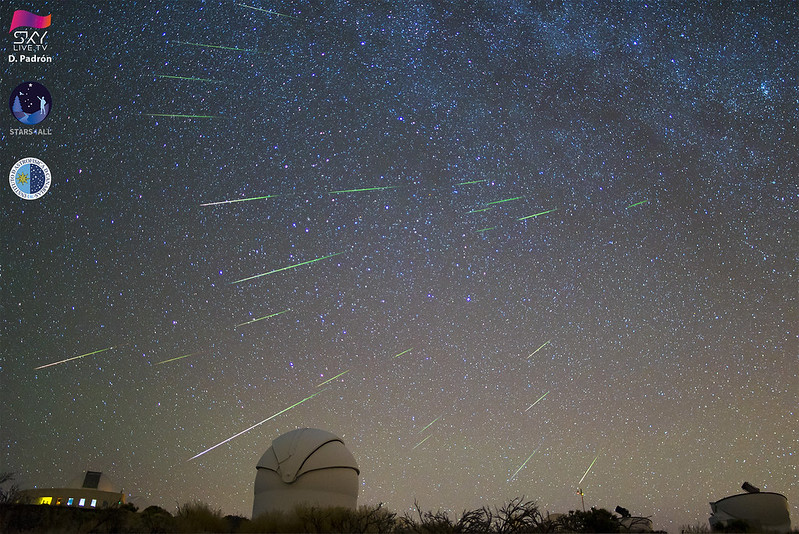 Within the framework of the outreach activities of the Energy Efficiency Laboratories (EELabs) project, the sky-live.tv channel will broadcast live this meteor shower from the Teide Observatory, under its coordinator Miquel Serra-Ricart. At the Roque de los Muchachos Observatory, the astrophotographer Antonio González, in collaboration with the Program of Astronomy Outreach / SODECAM – Service of Innovation of the Cabildo of the Island of La Palma will aso broadcast images of this astronomical event, from the site of the MAGIC telescopes, and the prototype Large Size Telescope (LST-1) which will form a part of the Cherenkov Telescope Array (CTA).

Every year at these dates the Earth passes through the cloud of dust and rocks which Comet Swift-Tuttle leaves behind on each of its orbits around the Sun. As a result, from mid-July until the end of August we can see the activity of the Perseids, also known as “Saint Lawrence’s Tears)

For 2020 the Perseids will show activity from 17th July to 24th August. The maximum is expected between 13.00 h and 16.00 h UT on 12th August. In Europe the nights of 11th, to 12th and 12th to13th August will show the maximum activity of this meteor shower. We know, from the best models, that the activity of the Perseids at maximum isa round 100 meteors per hour (ZHR, or zenithal hourly rate). This year the best time to observe them will be during the first hours after sunset, until around midnight, because the waning moon, with 47% of its disc illuminated, will make them difficult to observe at the end of the night.

Miquel Serra-Ricart, astronomer at the IAC comments “ This year the Moon will not be a real problema for the observation of the most famous meteor show of the year, The Perseids. We must be patient, as usual, and in ten minutes we should certainly be counting tens of meteors if we keep our eyes on a fixed point in the sky”

What are “shooting stars”?

“Shooting stars” are what we call the small particles of dust, of different sizes, some smaller than grains of sand, which are thrown off by comets or asteroids as they proceed along their orbits round the Sun. The resulting cloud of particles (called meteoroids) due to the thawing out of a comet caused by the Sun’s heat, is dispersed along the orbit of the comet, and the Earth passes through this every year on its orbit around the Sun. During this encounter the dust particles disintegrate as they enter the Earth’s atmosphere at high velocity, giving rise to the well know luminous trails whose scientific name is meteors. (A meteorite is a meteor big enough to survive its passage through the atmosphere and land on the surface of the Earth)

The progenitor of the Perseids is Comet Swift-Tuttle, which was discovered in 1862, and which, with a diameter of some 26 km, is currently the largest object which makes periodic approaches to the Earth.