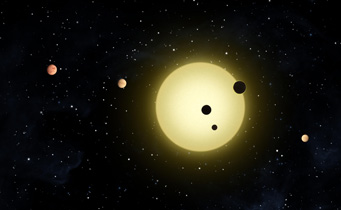 So far, Kepler has found systems with up to six planets (as shown here). The only known system with more planets is our own. But Planet Hunters may have found the first seven-planet system

Halloween is the season of bite-size candy, but who knew there were bite-size planetary systems? The 14 latest discoveries just announced by the Planet Hunters citizen-science program includes a world that gives the Kepler mission its first seven-planet system — and the whole system would fit between the Earth and Sun.

Planet Hunters is one of the crowdsourcing projects under the Zooniverse umbrella. Ordinary citizens examine the Kepler spacecraft’s precision light curves of stars that are not currently labeled as Kepler Objects of Interest (KOI) and flag any slight brightness dips that might indicate a planet crossing a star’s face. Many eyes examine each 30-day light-curve segment, and cross checks are built in. False transits are inserted to determine the volunteers’ skill at distinguishing signals from noise, and the volunteers are ranked by how well they replicate each other’s finds. A transit has to repeat with clockwork precision before it is considered “of interest.” Since December 2010, more than 250,000 volunteers have examined more than 19 million Kepler light curves, contributing 180 years of work.

Light curve with transit for star KIC 6805414 that was missed by the Transit Planet Search (TPS) algorithm.

Contrary to what many astronomers expected, Planet Hunters has succeeded in spotting not just the transiting objects that computer analysis found, but others that the machine algorithms missed. Planet Hunters has proved most effective at finding new candidates that are Neptune-sized or larger, but it has also identified sub-Neptune exoplanets.

With relatively long orbital periods ranging from 124 to 904 days, eight of the 14 newly announced candidates are in their star’s habitable zone, and two are in multiplanet systems. Their sizes range from roughly Earth’s diameter to super-Jupiters.

But it is candidate KOI-351.07 researchers say is the most significant find. If confirmed, as seems very likely, it will make the known six-planet KOI-351 system the first seven-planet system to be pinned down. As it stands, there are only two definite six-planet solar systems (KOI-351 included), and five five-planet systems in the Kepler data.

Light curve with transits for star with possible seven-planet system (KOI-351) that was missed by the Transit Planet Search (TPS) algorithm.

The host star of the KOI-351 system, KIC 11442793, is slightly hotter and larger than the Sun, with 1.1 to 1.3 times the Sun’s mass and radius. The system as a whole is a bite-sized doppelganger of our own: all its planets orbit no further out than the Earth-Sun distance. Yet despite the crowding, an orbital simulation found that the system could stay gravitationally stable for at least 100 million years.

The five innermost planets are smaller than Neptune, and the outer two are larger gas giants. The new, seventh addition is the farthest out. It seems to be interacting gravitationally with its neighbors, as shown by slight transit-timing variations, raising its probability of planethood even further.

To put the whole thing in context, if we were to place the KOI-351 system around our star, we’d have an entire solar system between Earth and Sun, laid out like ours with the smaller planets closest to the star and giants farthest out.

It’s conceivable that we’re seeing an extremely unlikely alignment of two different systems orbiting two different stars along almost exactly the same line of sight. However, no such coincidence has yet been found for any of the other 500+ multiplanet systems observed by Kepler. With those odds, we almost certainly have a new recruit joining the elite club of 7-and-overs, which up until this discovery contained only our home solar system.

For the fascinating details of how Planet Hunters works and how its latest discoveries were teased out, see the research team’s paper.

How cute! A bonsai solar system! Let's call it the Martha Stewart system.

Interesting report and research paper published on KOI-351 system with potential for 7 exoplanets. What I did not see, the host star H-R diagram age vs. stability of the system (<= 100 million years apparently). Q: Is the exoplanet system unstable over the age of the host star and what is its age?

Rod, the light curve illustrations are sourced to Schmitt et al. and this linked to paper answered part of your question. The last two sentences of this paper’s abstract addresses the KOI 351 system’s stability, and they found that the system is dynamically stable for > 100 million years. The age of this star wasn’t addressed and apparently is yet to be determined, as even Exoplanet.eu’s catalog still has the age unlisted.