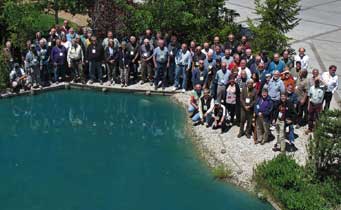 The attendees of the 2013 symposium of the Society for Astronomical Sciences gather to smile in California sunshine.

The annual symposium of the Society for Astronomical Sciences is a busy three days that span the breadth of small-telescope astronomical research. This year’s symposium (May 21-23) touched on planetary science, variable star photometry, spectroscopy (both instruments and project results), astronomical projects for education, and environmental studies — among other things. About 100 people attended the symposium this year.

It isn’t practical to do justice to all the talks that were presented, but here are a few that I found particularly interesting:

Exoplanets around white dwarfs: With a white dwarf as a parent star, an exoplanet might be larger than its sun. The planet could therefore block a large portion (or even all) of the star’s light when passing in front of it; even in the absence of a transit, there might be a significant signal from reflected starlight when the planet passes behind the star. Using backyard-scale telescopes (11- to 24-inch) and CCD imagers, Bruce Gary and his team are achieving astounding levels of precision — 2 to 4 millimagnitude, or differences in brightness of a few thousandths —.in their search for variations in starlight that would indicate a planet’s presence. Over two years they detected periodic dips of about one-hundredth magnitude every 2.69 hours from the white dwarf WD 2359-434. This might be a long-lived starspot, or it might be an exoplanet.

Jovian satellites: Using small telescopes and video cameras similar to those many amateurs use to monitor asteroid occultations, a network of amateurs is observing occultations and eclipses of Jupiter’s moons. The idea is that careful photometry of these events can reveal the moons’ tenuous atmospheres and gas and dust exhalations. Scott Degenhardt and Wayne Green presented back-to-back papers on these so-called “Jupiter Extinction Events,” a topic that has come a long way since Degenhardt described his first tentative (and controversial) observations several years ago.

Watching the asteroid turn: Kevin Ryan presented the results of an international collaboration of small-telescope researchers that appear to resolve a nagging uncertainty about the asteroid 1110 Jaroslawa. The previously reported light curve for this object looked nothing like what is expected from a rotating, elongated object; in fact it is very hard to imagine what sort of object shape could give rise to such a pattern. Taking advantage of amateurs’ willingness to devote a long series of all-night sessions to monitoring a single object, Ryan’s project mapped nearly a complete light curve for the asteroid and found that it displays the more “normal” shape expected from a football-shaped asteroid rotating end-over-end. Happily, when the previous data were analyzed using the improved rotation period found by Ryan, they fell nicely into line with his result.

Lights no danger for astronomers: Eric Craine presented a careful study of a recent roadway lighting project in Sedona, Arizona, which had an unexpected (but wonderful) result. Most amateur astronomers are rightly concerned about the proliferation of nighttime lighting and its potential consequences for astronomy, wildlife migration, and human health. So when the Arizona Department of Transportation proposed to significantly increase the lighting along the main highway through Sedona, quite a few interested groups opposed it. However, there were virtually no quantitative data on the baseline levels of sky glow. Craine conducted both ground and airborne surveys of the sky brightness, both before and after the roadway lighting upgrade was completed. His report contained two significant messages:

1. There was no statistically significant change in sky brightness after the project was completed — even though it dramatically improved the lighting on the roadway and sidewalks. The Arizona DOT did an excellent job in designing and implementing this project!

2. The community is poorly served if it reacts with kneejerk opposition to a lighting project, instead of depending on relevant quantitative data. The Sedona project appears to be a fine example of how lighting can protect both public safety and dark skies.

Videos of these presentations and all of the other technical papers from the 2013 SAS Symposium will be available on the SAS website within a few weeks. You can also read highlights from the 2012 meeting.

SAS board member Robert Buchheim is the author of The Sky Is Your Laboratory, a manual for research-oriented amateur astronomers, and received the Western Amateur Astronomers’ G. Bruce Blair award in 2010 for his encouragement of amateur science.

Thanks for this timely and interesting report. It's good to know that the Sedona highway lighting project did not significantly increase skyglow. While it's true that kneejerk responses are rarely the best approach, I also doubt that the Arizona Department of Transportation would have been so careful if the local community had not been concerned and outspoken.