The first half of October 2013 is a good chance for early risers to catch the zodiacal light, the faint eastern glow preceding dawn.

I’ve never seen the zodiacal light, having spent most of my life living near big cities (and one year in more rural, but rainy Ireland). But since I’m moving to a (somewhat) darker location, and because I recently read Kelly Beatty’s article “Stalking the False Dawn” from the September 2013 issue of S&T, I’m inspired to give a few mornings to the attempt. 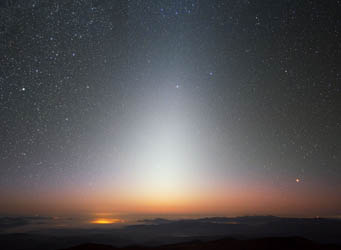 The zodiacal light is towering and unmistakable in this September 2009 image taken minutes after sunset from the European Southern Observatory's La Silla Observatory in Chile.

From October 3-16, the subtle, tapering glow of scattered sunlight becomes visible between 120 and 80 minutes before dawn, as seen from mid-northern latitudes. The triangular glow leans slightly to the right along the ecliptic plane, and Jupiter lingers near its peak. Though the glow fades into the background of light-polluted skies, a dark location paired with a clear view of the horizon will do the trick.

How dark is dark? If you’ve glimpsed the Milky Way down to the horizon from your backyard, you might see the zodiacal light too. But keep in mind that it’s harder to recognize, being a vague glow with no hard edges. In fact, Tony Flanders, thought it was light pollution the first time he saw it, as he notes in a previous blog post.

Dust Motes Dancing in The Sunlight 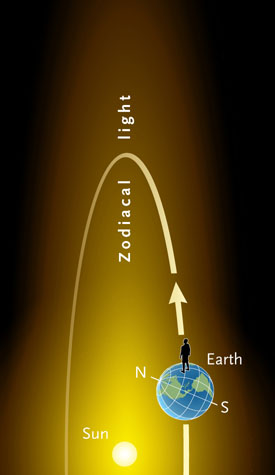 Sunlight scatters off tiny dust particles in the inner solar system (mostly inside Earth's orbit), appearing as a triangular glow, best seen just before dawn between October 3rd and 16th.

Though certain times of year are better for seeing the zodiacal light (the alignment of the ecliptic matters, as do moonless skies), it’s always there, ringing the sky along the plane of the solar system. The zodiacal light is actually sunlight, scattering off a thick pancake-shaped cloud of dust motes floating in the inner solar system. (Find out where the dust comes from.)

The dust grains are so much larger than the wavelength of the visible light they’re scattering that they tend to scatter the light forward, bumped only a slight angle from the direction it was already travelling. Most of the zodiacal light comes from dust inside Earth’s orbit, which is why the zodiacal light appears brightest nearest the Sun, and fades as you travel upward along the ecliptic.

If your skies are truly dark, you might see a faint, oval-shaped brightening in the zodiacal band opposite the Sun. That’s the faint gegenschein, where the dust beyond Earth’s orbit has scattered the sunlight backwards instead of forward.

Bonus for the early risers attempting this challenge: Jupiter passes just 6’ away from Wasat in the predawn hours of Friday, October 4th. Wasat is generally visible to the unaided eye, though it’ll be a test of your eyesight to see if you can distinguish it so close to Jupiter. You’ll need a telescope to catch its fainter orange companion, a K-class star. Tony Flanders talks more about Jupiter and Wasat in this week's SkyWeek.