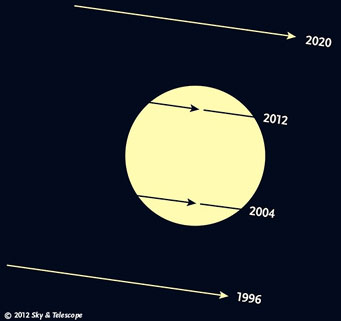 People attuned to the rhythms of the night sky know that certain cycles in astronomy repeat themselves over and over. These include the annual seasonal cycle as Earth orbits the Sun, the 29½-day cycle of lunar phases, and the fact that Mars comes to opposition every 26 months. Even solar and lunar eclipses come in saros cycles.

But compared to these other cycles, the current cycle for transits of Venus is weird. Make that really weird. This article explains why transits of Venus are so rare that the transit coming up on June 5th/6th will be the last one you'll ever see, why the cycle has such an odd pattern, and why the current cycle won't last forever. (The transit occurs on June 5th in the Western Hemisphere and June 6th in the Eastern Hemisphere.)

How to Get a Transit of Venus

For a transit of Venus to occur, two events must occur simultaneously, and it's rare to have such perfect synchrony. 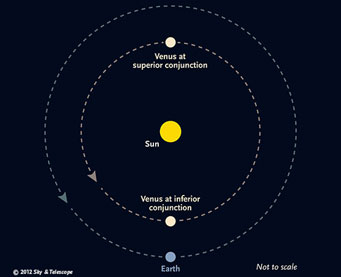 Transits of Venus can only occur when Venus passes between the Sun and Earth, a point on its orbit known as inferior conjunction.

First, and most obvious, Venus has to move directly between Earth and the Sun so that an imaginary observer looking “down” on the solar system from above would see the three bodies form a perfectly straight line. When this happens, astronomers say that Venus has come to inferior conjunction. Venus orbits the Sun faster and in a smaller orbit, and it comes to these inferior conjunctions every 584 Earth days.

If Venus and Earth orbited the Sun in the same plane, we'd enjoy a transit of Venus every 584 days, and the June 5th transit wouldn't be such a big deal. But in reality, Venus's orbital plane is tipped 3.4 degrees relative to Earth's orbital plane. The planes cross each other at two points called nodes. To get a transit, Venus has to be at inferior conjunction at the exact same time it's at a node. This perfect 3-D lineup doesn't happen very often. Normally, Venus's inclined orbit means it is located “above” or “below” the Sun when it comes to inferior conjunction. 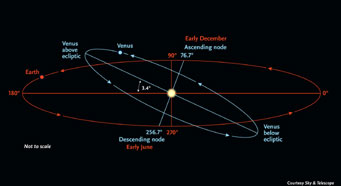 Venus's orbit around the Sun is inclined relative to Earth's orbit (exaggerated here for the sake of clarity). Transits of Venus can only occur at the two nodes, where the orbital planes of Venus and Earth intersect.

So far, things probably seem rather simple and straightforward. But here's where the transit of Venus cycle starts getting weird (but also quite interesting).

For the past few centuries and the next few centuries, these perfect 3-D alignments occur at intervals of 8, 105½, 8, and 121½ years. In reality, think of this as a 243-year cycle, with pairs of transits separated by only 8 years, but with each pair separated by more than a century. 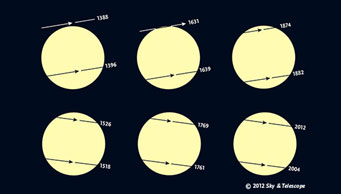 The opposite is the case for ascending-node transits. The first transit in an 8-year pair crosses the northern part of the Sun, the second one crosses the southern half. 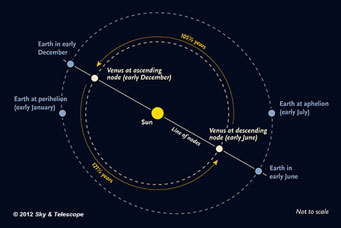 The Earth's elongated (eccentric) orbit (exaggerated in the diagram) explains why there is an asymmetry in the amount of time from one transit pair to the next.

The diagram on the right (in which Earth's orbital eccentricity is exaggerated for the sake of clarity) shows what's going on. Basically, Earth is near its farthest point from the Sun (aphelion) in June and near its closest point to the Sun (perihelion) in December. When Earth is closer to the Sun's powerful gravity, it moves slightly faster in its orbit than when it's farther from the Sun. The difference in Earth's orbital speed from perihelion to aphelion produces a longer gap (121½ years) between the time it takes to line up between the December and Junes transits than the 105½ years it takes to line up from the June to December transits. 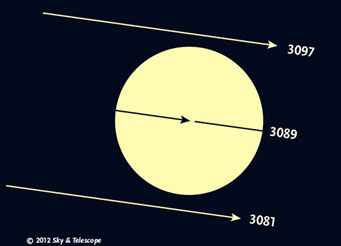 In the future, transits of Venus will become even more rare. This diagram shows the track Venus will take across the Sun in 3089. In 3081 and 3097, Venus's path will miss the Sun (from Earth's perspective).

Unfortunately for astronomers living in the distant future, the frequency of transits will decrease. Both Venus's and Earth's orbits precess, meaning they rotate over long time periods to produce a rosette-like pattern. In other words, Earth's perihelion shifts in its orbit, and so does Venus's. Because of precession, Earth-bound astronomers will only be able to enjoy one ascending-node transit for centuries after the year 3000. They will see a descending-node transit in 3089, but 8 years later, in 3097, Venus will come to inferior conjunction too far above the Sun to transit its disk.

And over tens of thousands of years, the 243-year cycle will eventually change as the eccentricity of Venus's and Earth's orbits evolve due to the gravitational perturbations of other planets. Over even longer timescales, chaotic effects take over, and the mathematics becomes so uncertain that today's astronomers can no longer predict when these rare celestial alignments will take place, and what future cycles will be like. 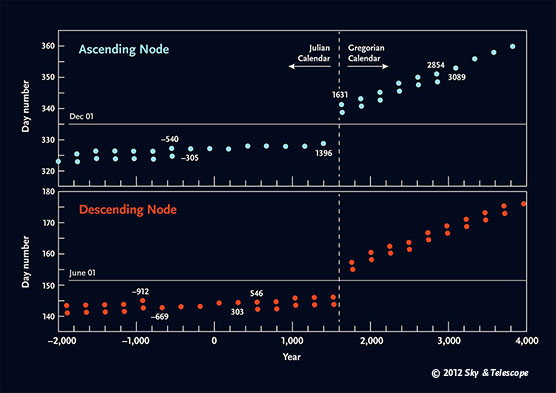 By plotting the number of days into each year when a transit of Venus occurs, it's easy to see the long-term behavior of transits of Venus, and the fact that we're fortunate to live during a period when we get to see two transits at both the ascending and descending nodes. Note the change from the Julian Calendar to the Gregorian Calendar around the year 1600. Retired NASA astronomer Fred Espenak provided S&T with the data for this diagram.

Thanks for the great article. Learning more about the subtleties of our galaxy is very cool. Since this is a once (well twice) in a lifetime event, I'm going to make sure to witness it and I can add more fun to the event by visualizing the details in this article regarding the respective orbital planes, speed and orbital nuances of Earth and Venus. Thanks again!

I would like to find out about what time of day on June 5th and 6th Venus will start its transit across the sun.I have read a few different articles about Venus's transit and it seems that none of them indicated what time it starts for different areas of the Earth.

From this article: http://skyandtelescope.org/observing/home/Transit-of-Venus-February-2012-134332798.html "Seen from anywhere on Earth, the transit starts within a few minutes of 22:10 Universal Time (6:10 p.m. EDT) on June 5th and ends within a few minutes of 4:45 UT June 6th." It also has two tables with specific times for some cities and a link to a page that will calculate times for any location.

Tried to print the story as it is very useful however the is a page missing between 5 and 6!

The alignment of Sun, Venus and Earth that produces a transit recurs with high precision (about 1 arc minute in the relative position of Venus) every 243 years. This recurrence is more precise than the 8-year cycle that usually gives us two consecutive transits. (The 8-year cycle is off by nearly 20 arc minutes in position compared to the 31.5 arc minute diameter of the Sun, which explains why there cannot be more than two consecutive transits with the 8-year interval.)
In 242.997 siderial years (88756.1 days), the Earth will have completed nearly 243 revolutions around the Sun (about 1 day short) using the distant fixed stars as a reference, whereas Venus will have completed 394.997 revolutions, thus returning to the same position relative to the Earth. The “nodes” of Venus’ orbit regress by 0.7 degrees during this same time interval, cancelling out most of the north-south shift that would otherwise be expected due to the inclination of Venus’ orbit and the 1-day difference from a complete revolution. Because our Gregorian calendar system is adjusted for the precession of the Equinoxes, the calendar date of the alignment is typically a couple days later each time (June 5, 2012 vs. June 3, 1769) rather than one day earlier.
The resulting series of transits is similar to the solar eclipse Saros series, but with a longer period (243 years instead of a little more than 18 years). The longitude shift on Earth between successive events is about 45 deg west (3 hours in time). The series that includes the 1769 transit observed by Captain Cook and the 2012 transit is called “Series 5,” and the next event will be on June 8, 2255 for the U.S., beginning about 6:00 PM PDT (3 hours later than the current transit). By 3713, the Series 5 transit will be so well-centered on the Sun that there will be no transit (or just a slight grazing event) 8 years earlier, marking the end of Series 3 transits such as the 2004 event.

Looking at Fred Espenak's data more closely, I see that the 3-hour shift I mentioned above (after a full 88,756 days) is approximately valid for June transits, but for December transits the shift is about 1 hour earlier for each successive transit in the series. Presumably orbital eccentricity is the reason. This means that the 2117 transit will just be visible before sunset for the U.S. west coast, whereas the 1874 transit wasn't visible at all from the U.S.