Astronomers are beginning to understand the unlikely formation and dangerous survival of exoplanets circling binary stars. 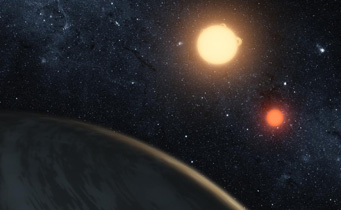 An artist's conception of a circumbinary exoplanet.

Reality is catching up with science fiction. In 2011 astronomers detected a planet orbiting two stars and nicknamed it Tatooine after the fictional Star Wars planet. To date, six similar planets have joined the list of wacky circumbinary planets.

But even with a half dozen of these systems to study, astronomers are baffled. Binary star systems are downright dangerous. Powerful tidal forces from the two stars can easily grind a planet to dust, let alone prevent it from forming in the first place.

This week, however, two binary star systems are shedding twice the light on their circling exoplanets, providing promising clues to these exotic systems.

Research led by University of Bristol astronomers show that most circumbinary planets likely formed far away from their central stars and then migrated in at some point in their history.

Take as an example Kepler-34b. At a whopping distance of 4,900 light-years, this gaseous Saturn-like planet orbits its two Sun-like stars at 1.09 astronomical units every 289 days. The stars themselves orbit and eclipse each other every 28 days.

In order to better understand how this system formed and evolved, the team carried out two computer simulations representative of the Kepler-34 stellar system and a third of a single star system.

They began with a circumbinary protoplanetary disk: a dusty circling plane of small objects, or planetesimals, where planets form. They then watched the disk’s particles gravitationally interact with one another over time (in this case 150 years, or 2,000 binary orbits) in order to determine the likelihood that planets might form.

In contrast, the collision outcomes in both simulated Kepler-34 systems vary dramatically by distance from the host stars. Super-catastrophic collisions dominate out to 1.1 a.u., leading to a hostile environment. But then partial and perfect mergers start taking over. And by 1.5 a.u., the collision occurrence rates begin converging toward that of a single star.

Given the harrowing formation environment that would have existed at Kepler-34b’s current location, the planet likely formed beyond 1.5 a.u. and migrated inward. When the authors evaluated all known circumbinary planets, they found that only one planet, Kepler-47c, could have formed at its current location of 0.99 a.u.

While the research team was the first to include the self-gravity of the planetesimals and an accurate collision model, the next phase will be to include the gravitational influence of the gas in the protoplanetary disk (as opposed to only the solid planetesimals), says exoplanet researcher Hannah Jang-Condell (University of Wyoming). Leinhardt agrees this will be the next step. 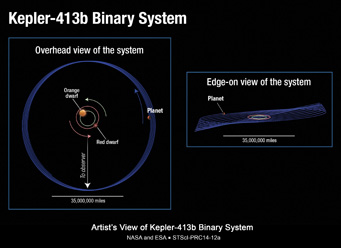 An illustration of the Kepler-413 binary system. View the original image here.

A second circumbinary planet recently in the news is located a little closer to home at 2,300 light-years. Kepler-413b orbits an orange star and a red dwarf every 66 days.

But that doesn’t mean this super-Neptune transits every 66 days like clockwork (most exoplanets we’ve detected do in fact transit consistently). Astronomers using data from NASA’s Kepler mission found an unusual pattern in the transits: they saw three transits in the first 180 days, no transits throughout the next 800 days, and then five transits in a row. No visible transits should occur again for the next six years.

This exoplanet will experience erratic changes in seasons due to drastic fluctuations in temperate from its host stars based on complex orbital dynamics.

Astronomers are still trying to explain why this planet is out of alignment with its stars. In our solar system, other planets exert gravitational influences on a single planet and cause it to precess. There could be other planets in this system, or the likely culprit could be a very powerful outside star.

Would it be completely far-out to consider that our own system originally had a binary star, somehow merged into one or one flung out later? Fitting the well known several mass extinctions on erth plus the horrific scenario of the origin of our moon could maybe plausibly managed,then, too?

... as well as ... some of the wondrous migrating incidents and their explanations that occurred, e. g. our big gas planets?

I certainly agree that migration occurs in exoplanet systems. Astrophysicists have recently discovered that the positions of several major planets in the Solar System have undergone major positional changes.

However, it may be that the first event in the formation of an exoplanet system is not an ab initio cloud collapse event, but rather a dissipative capture event that would produce a considerable envelope of gas/dust and eventually produce a disk-like internal structure. The capture model for exoplanet formation is quite natural and it would readily explain the following without invoking smoke and mirrors:
1. Wide binary systems,
2. Hot Jupiter exoplanet systems,
3. Exoplanet systems with retrograde planets,
4. Exoplanet systems with high eccentricity planets,
5. "wobbly" precessing exoplanets,
6. Circumbinary planetary systems,
etc.
in a simple, and less ad hoc, and less credibility-straining manner.

--- Helmut A. Abt, a highly respected astrophysicist and former editor of the Astrophysical Journal, presented a paper at the most recent AAAS meeting in Alaska that concluded that many exoplanet and multi-star systems MUST be the result of capture processes. It is virtually inevitable mathematically.