Some brilliant explosions at least 10 times more powerful than regular supernovae might come from a white dwarf merging with a massive companion star. But not everyone agrees on that explanation.

Superluminous supernovae have baffled astronomers since their discovery at the turn of the century. These brilliant blasts show the characteristics of exploding stars, but they are at least 10 times more powerful than regular supernovae. Astronomers have invoked the death of very massive stars or even collisions between stellar behemoths as explanations.

In today’s Science, Anders Jerkstrand (Max Planck Institute for Astrophysics, Germany, and Stockholm University, Sweden) and colleagues revive an old idea for one of the most luminous supernovae ever recorded, designated SN 2006gy.

New observations, they argue, point to a fairly simple explanation: The blast happened when a stellar cinder known as a white dwarf siphoned off mass from its companion. This is a relatively common way for small stars to die, but in this case, the resulting detonation crashed into a massive shell of gas surrounding the dwarf, lighting it up so that we could see it from 238 million light-years away.

This scenario explains most of the observations of the event, including its extreme brightness and the way that brightness changed over time. It could even explain other similar superluminous supernovae. But first it will have to pass muster with the community, which had long since eliminated the idea that a low-mass star could cause such a brilliant explosion.

After astronomers first spotted SN 2006gy outshining its entire galaxy 14 years ago, observations showed that the supernova had slammed into something — probably a recently ejected, massive gaseous shell. This interaction left fingerprints in the event’s light spectrum that earned SN 2006gy the label “Type IIn” — a classification it shares with several other (but not all) superluminous supernovae.

Most astronomers agree on this much. But what caused the supernova to begin with, and why did the blast follow on the heels of a massive ejection of mass?

High-resolution images showed that the supernova had gone off near a star-forming region. Along with other observations, this led many astronomers to think that the progenitor was a massive star that had burned fast and furious before it died an early death. But it remained unclear where the massive shell had come from.

Iron in the Fire

Now, a new understanding of old observations casts doubt on the massive-star scenario.

Jerkstrand and colleagues began by investigating a series of unidentified emission lines seen in a spectrum taken just over a year after the supernova went off. By trawling through atomic line lists, Jerkstrand’s team was surprised to find that the mystery lines coincided with those produced by neutral iron.

The core-collapse of a massive star doesn’t usually leave much iron behind. But a Type Ia supernova does. This explosive event happens when a white dwarf, the remnant of a less massive star, eats too much and detonates. A Type Ia supernova can leave behind iron in quantities around half the Sun’s mass. (That’s a lot of iron!) Based on the iron emission lines in SN 2006gy’s spectrum, Jerkstrand and colleagues calculated that the event had produced at least a third the Sun’s mass in iron.

But Type Ia supernovae are not anywhere as bright as SN 2006gy was. A detonating white dwarf would have had to convert almost all of its energy into radiation to produce that much light. That can happen, Jerkstrand explains, if the explosion slams into a shell that’s much more massive than the exploding dwarf itself.

So, here’s what the team proposes:

As the white dwarf was siphoning mass off of its giant companion star, the two stars spiraled toward each other. They came so close, in fact, that they shared a common envelope, basically trading gas between them. But that envelope wasn’t stable. As the stars continued to spiral inward, the common envelope was ejected so­me 10 to 200 years before the stellar cores merged and exploded. This scenario explains the connection between the mass ejection and the supernova itself.

But not everybody finds this connection convincing.

“I am skeptical,” says Stan Woosley (University of California, Santa Cruz). “There is no obvious reason that the merger of a white dwarf with the core of a giant star would make the white dwarf explode.” For example, he adds, the extra material falling onto the white dwarf as it spirals into the giant star could have ignited “gentle burning” that proceeds from the surface inward. Such a detonation would have been more contained.

Jerkstrand and his colleagues acknowledge that their scenario hasn’t been explored much in simulations. The ball, in other words, is in the theorists’ court.

Woosley also notes that it’s difficult to precisely estimate the amount of iron present based on spectra taken so long after the supernova went off. Nathan Smith (University of Arizona), who like Woosley was not involved in the study, agrees that the iron lines are highly suspect. "SN 2006gy is only one arcsecond from an active galactic nucleus in the host galaxy, and it is seen amid bright galaxy light that is almost impossible to subtract from the ground," Smith explains. "In the original paper reporting these, it looked a lot like some of these unidentified emission lines are artifacts from absorption lines in the background stellar light."

But if the iron measurement pans out, it could play an important role in understanding what happened. One popular scenario, which Woosley calls “one of my favorite models,” is a pulsational pair instability, whereby a star with the mass of 100 Suns explosively ejects huge amounts of its outer envelope. “If any new iron were present,” Woosley says, “it would rule against a pulsational pair instability supernova origin.”

While several other superluminous supernovae could also fit by the scenario described by Jerkstrand’s team, it will be difficult to tell — they are all farther away and if iron has left fingerprints in their spectra, the imprints can’t be seen.

Editorial note: Comments from Nathan Smith were added to this story on January 24, 2020.

There is another possibility. The WD goes Type Ia supernova, then the shockwave collides with the larger star, first quickly stripping the outer layers then colliding with its core. This shock destabilises the stellar core, causing it to go as an under-luminous Type II supernova. The combined energies of this explains the iron lines plus the apparent higher luminosity, while eliminating traces of the dual supernova event. Furthermore, the expelled envelope interacts with the expanding front, making the supernova appear uniform, but much brighter than expected. Better still, it eliminates the need for a massive star, and the evolutionary problem of creating a white dwarf companion before the massive earlier expected demise as a neutron star, etc. 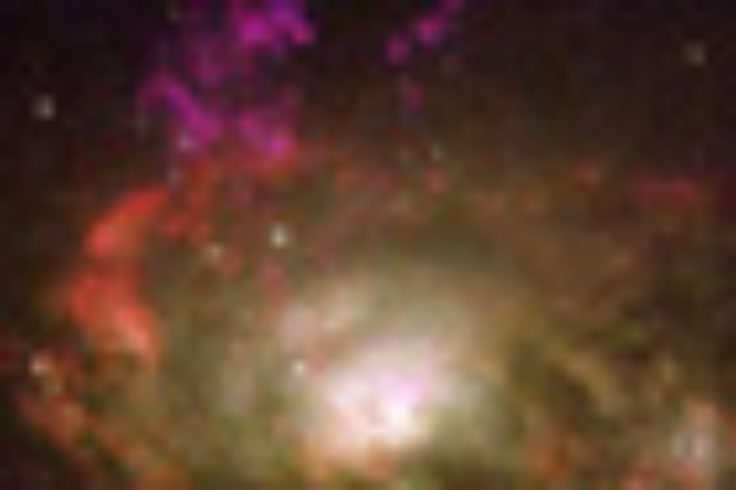 Dust in the Heart of Circinus