The rising count of gravitational-wave events is giving us a new look at a once-invisible population of black holes.

Two weeks ago, scientists announced the detection of four black hole mergers, discovered thanks to the undulations they created in the fabric of spacetime. These latest events bring the tally of such smashups to 10. (An 11th is the famed double neutron star collision.)

Now that we’ve entered the double digits for gravitational-wave discoveries, I’d like to stop and take a look at what these detections are revealing as a group. We’re nowhere near the illuminating statistical power brought by thousands of examples, as we are with exoplanets, but we can still sketch out an intriguing picture.

Black holes are simple creatures; their two defining characteristics are their spin and mass. Astrophysicists measure black hole spin as a fraction of the theoretical maximum, which depends on the object’s mass and some other numbers. The values range from 0 (not spinning) to 1.

A binary black hole system involves three spins: each individual black hole’s rotation, plus the two objects’ revolution around each other. These spins don’t necessarily line up. Think of two tops, spiraling in toward each other. The tops can stand straight up, their axes perfectly perpendicular to the tabletop. But they can also lean at various angles, roll on their sides, or even rotate backwards compared to the direction of the circuit each top traces around its partner.

The same holds true for black holes. With current detector sensitivities, it’s difficult for the LIGO and Virgo teams to pinpoint the individual spins of the binary members that unite. But they can make some estimates, and the spin of the created black hole is fairly clear.

Since the first gravitational-wave detections began piling up, I’ve been watching the spin measurements with growing fascination. Maya Fishbach (University of Chicago) and her colleagues had predicted that a black hole made by the merger of two others would spin at a rate that’s roughly 70% of its maximum — regardless of the parent objects’ masses and spins. One after another, each LIGO/Virgo detection has confirmed this prediction.

What’s equally interesting, though, is that none of the original binary members appear to have spins this high. In the reanalysis recently released, the teams calculated each merging black hole’s spin. Only two events — GW151226 and GW170729 — involved objects with any detectable spins; the rest are basically zero. (The zeros include the parent black holes of GW170104, at least one of which researchers had thought spun backwards. The new analysis, taking better account of detector noise, revises that inference.)

The caveat here is that the spins are measured in terms of how tilted they are compared to the binary’s orbital plane. It’s possible that the binary black holes might be whirling at wonky angles, unseen. But the researchers suspect this isn’t merely a matter of tilt hiding the rotation; the black holes really do have lower spins.

I reached out to Fishbach for help understanding what these numbers mean. It comes down to origins, she explains. If the binary members really do spin slowly or not at all, then we can essentially rule out the scenario in which the LIGO/Virgo pairs all contain black holes formed from previous mergers. In other words, we are likely watching the collisions of first-generation black holes, made from stars.

The masses support this conclusion, she adds. Above a mass of about 45 Suns there should be a gap, because the stars that are big enough to create black holes in this range instead obliterate themselves in a particularly destructive kind of blast that doesn’t make a black hole. The biggest binary black hole LIGO and Virgo have detected is approximately 50 Suns — potentially problematic for a supernova creation, but not indubitably in the no-man’s-land. If in the future LIGO and Virgo detect binary black holes in this forbidden zone, then it would be clear evidence of a second-generation black hole.

We’re still unable to say much about how the binaries paired up to begin with. GW151226 and GW170729, the only two events with clearly spinning members, involved black holes that rotate in the same direction as their orbit around each other. That might indicate that each pair was born as a couple, instead of joining up later in life: We’d naïvely expect all three spins in the binary to line up if the black holes formed from a binary star system, whereas the black holes might be misaligned if they paired up after their creation, perhaps by meeting in the center of a globular star cluster. However, astronomers do debate this simplistic picture, since supernovae or binary interactions could knock the resulting black holes askew. That insight will have to wait for the future.

The LIGO Scientific Collaboration and the Virgo Collaboration. “Binary Black Hole Population Properties Inferred from the First and Second Observing Runs of Advanced LIGO and Advanced Virgo.” Posted to arXiv.org on November 30, 2018.

The LIGO Scientific Collaboration and the Virgo Collaboration. “GWTC-1: A Gravitational-Wave Transient Catalog of Compact Binary Mergers Observed by LIGO and Virgo during the First and Second Observing Runs.” Posted to arXiv.org on November 30, 2018. (see page 12 for a table of all event parameters, page 15 for diagrams of the estimated binary members' spins)

When I studied physics over 50 years ago we didn't talk much at all about black holes. Now they are much studied. It is fascinating to see how our understanding of these objects is increasing. Thanks Camile for the interesting article.

The combination of the randomness of the correlation of the vectors of spin angular momentum of the individual black holes with the randomness of the orbital plane implies a great degee of randomness for spin pairing. It would be like tossing a die and the result is anywhere betwen 0 and 360 degrees (the BHs can be spinning in opposite directions even if orbiting with spin vectors perpendicular to their mutual orbital plane).

Camille: excellent article. Very clearand concise!
I believe the discovery of the colliding neutron stars to be the greatest discovery of the last few decades (since the discovery of pulsars). They may be the origin of many of the heavy elements via the r-process (rapid neutron nuclear transformation that happens so fast that nuclei build up without the chance to disintegrate, as in the slower s-process in normal, massive stars).

What LIGO and VIRGO have done is to unveil a new vision into the cosmos akinto the begininngs of radio astronomy. When LISA is operational, in solar orbit behind the earth a dawn of understanding is on the event horizon.

We shall see!
The future is bright, even if black! 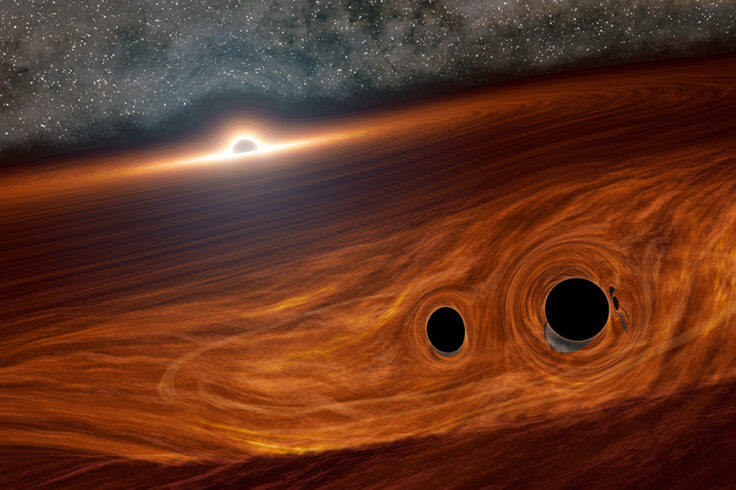 Seen at Last: A Superfast Jet Streams Away from Neutron-star Smashup