Consumer point-and-shoot digital cameras costing under $300 are revolutionizing the way amateur astronomers take images of the sky. What makes a astrophotography camera so attractive is their versatility, ease of use, capability of recording color images in a single shot, their high resolution, and the elimination of film and processing expenses. Deep sky astrophotography is now more tangible and at a more affordable price point for amateurs to enjoy than ever before! 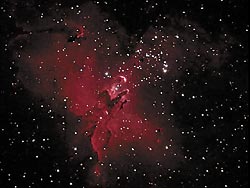 What's more, digital, cameras can also be used for regular daytime photography. This is not the case with expensive astronomical CCD cameras, which are really single-purpose units.

Practically anyone can now capture close-up views of the Moon and bright planets, often achieving better results than with a 35-millimeter film camera. All you have to do is hold the camera up to the telescope eyepiece or attach it directly to the eyepiece with a homemade or commercial bracket, aim, focus, and shoot. You get instant results – and can just delete the bloopers.

For basic, wide-field shots of constellations and planet conjunctions, you don’t even need a telescope — just a camera capable of making exposures up to about 8 to 15 seconds and a means to hold it steady, such as a tripod. Since all the controls are on the camera itself, you don’t need a computer in the field. Your home computer is used later to sort, process, and archive the images.

In another article, I covered the basics of how to image the Sun, Moon, and planets — bright targets — through a telescope with a digital, astrophotography camera. This article looks at ways advanced amateurs can record dim star clusters, nebulae, and galaxies as part of getting started in deep sky astrophotography.

These dark frames show how electronic noise builds up in a digital-camera image. Turning off the camera between exposures greatly reduces the noise. All images were taken by Arpad Kovacsy with a Nikon Coolpix 995 (set at ISO 400). The exposure time was 60 seconds with the camera's lens covered. The labels give the ambient temperature in Fahrenheit and the number of successive frames taken.

Because of their inherent dimness, deep sky objects require exposures of up to several minutes. For photographic films and astronomical CCD cameras, this is not a problem. But in a digital camera designed mainly for daytime use, the maximum useful exposure time is just a few seconds before electronic noise sets in, degrading the image. Unlike astronomical CCD cameras, digital cameras don’t have a built-in active cooling system. Cooling is essential for minimizing the noise generated in the camera’s electronics. You need a way to keep a digital camera relatively cool in order to increase its exposure time and therefore, enhance its sensitivity to faint objects and its overall image quality. 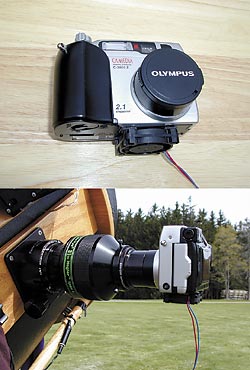 Top: Astro imager Gary Honis attached a small DC fan to his Olympus C-2000 Z camera to cool it down He used small squares of Velcro to mount the fan over the small intake hole he made at the camera’s base. “This fan is vibration-free and the Velcro tape isolates it even further,” he says. Small openings elsewhere in the camera serve as exhaust vents. Bottom: Most consumer digital cameras do not have removable lenses, requiring that you shoot through them using the afocal method. Here Honis's C-2000 Z is coupled to a 31-mm Tele Vue Nagler eyepiece on his 20-inch Starmaster Dobsonian reflector. Note, however, that high-end professional digital SLR cameras feature an interchangeable lens mount so you can use standard T-ring adaptors to attach the camera directly to the telescope.

The frigid ambient air of winter cools a digital, astrophotography camera naturally. During warm summer nights, however, images are often riddled with "hot pixels" and noise artifacts, so image processing at the computer is a must for long exposures.

"At ambient temperatures above 32° Fahrenheit, or 0° Celsius, noise builds up quickly," notes Arpad Kovacsy, who has imaged with a Coolpix 995 and 6-inch Astro-Physics refractor from his light-polluted home in suburban Washington, D.C. "One simple way to partly compensate for this effect is to turn off the camera between exposures to allow it to cool down. My dark-frame sequence [below] demonstrates how rapidly noise builds up in consecutive shots, and how turning off the camera mitigates this problem somewhat."

Kovacsy's first image, taken at an ambient temperature of 66° F, is nearly free of noise. The 10th consecutive image is the worst. Turning off the camera for 10 minutes produced an image as clean as the first. "Note how even the 10th image taken at 40° F has less noise than the second image taken at 66° F," he adds. "Based on my trials, temperatures of 32° F or below work best when taking minute-long exposures with the Coolpix 995."

Another Approach of Using an Astrophotography Camera 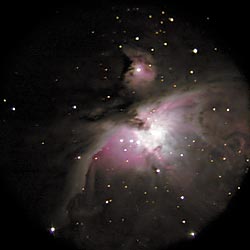 Gary Honis obtained this stunning view of M42, the Orion Nebula, with his air-cooled Olympus C-2000 Z astrophotography camera coupled to his 20-inch Dobsonian. North is up and the field is ½° wide.

Pennsylvania astro imager Gary Honis uses a different approach to image deep-sky objects with his Olympus C-2000 Z and C-2020 Z cameras and 20-inch Starmaster Dobsonian reflector, which is equipped with a tracking system. Although his cameras are limited to maximum exposure times of 32 and 16 seconds, respectively, his telescope’s large aperture can gather a lot of photons during such exposures before noise effects become a problem.

Imaging relatively bright deep-sky objects such as globular clusters is a piece of cake for Honis. "In fact, a single 16-second exposure is sometimes acceptable," he says. "For dim clusters, stacking several images can help improve the image. For dimmer galaxies or nebulae, the exposure limit becomes a problem, even with a large aperture. I need to stack multiple exposures to improve the results."

To assist in the camera’s cooling, Honis attached a small computer fan to his C-2000 Z camera. "This involved taking the camera housing apart, removing the tripod-mount socket to create an opening, and mounting a 12-volt DC fan over the opening to force air into the camera body," he explains. "The results are dramatic. Heat generated by the electronics is quickly pumped out of the camera. On freezing nights I can do practically noise-free, single-shot deep-sky imaging with a 2-megapixel $300 point-and-shoot digital camera in full color!" 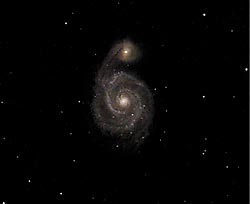 Johannes Schedler took this portrait of the Whirlpool Galaxy, M51, using a Nikon Coolpix 995, an 11-inch Celestron telescope, and a 40-mm Pentax XL eyepiece. It's a composite of twelve 60-second exposures at ISO 400 and an ambient temperature of 32°F.

Honis describes a complete, step-by-step procedure on how to disassemble a C-2000 Z. He and other astroimagers are experimenting with adding thermoelectric cooling to the digital camera's CCD detector. Thermoelectric cooling systems are currently used in many astronomical CCD cameras.

Bear in mind that modifying your camera will void its warranty, so proceed at your own risk. Failure to take proper precautions can result in permanent damage to the camera’s sensitive electronics and/or optics. "After disassembly and reassembly my camera functioned properly, but your camera may not," warns Honis.

How deep can such an air-cooled camera setup go? "By stacking multiple exposures, the bright galaxies are not a problem," he says, "and I can crudely image very faint objects such as the Horsehead Nebula." 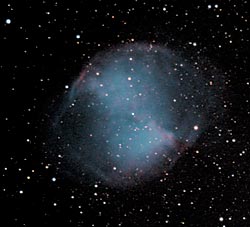 The Dumbbell Nebula, M27, in Vulpecula was recorded by Mike Unsold with a 14-inch Celestron Schmidt-Cassegrain telescope and a Canon EOS D60 camera set at ISO 400. Nine 3-minute exposures were stacked and processed with ImagesPlus.. One example of what you can capture with your astrophotography camera. 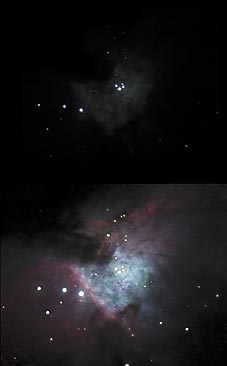 Johannes Schedler took these two close-up views of the Orion Nebula and its stars using the Coolpix 995, 11-inch Celestron telescope, and 40-mm Pentax XL eyepiece. The top image is a single 8-second raw exposure; the bottom one consists of five 8-second and one 30-second exposures assembled and processed with PhotoShop. The camera was set at ISO 400, and the ambient air temperature was 32°F.

Alternatively, if your camera has a video output, you can attach an external monitor or TV to increase your focusing accuracy. After focusing, the ISO and zoom settings are switched back to desired values (but watch out — on some low-end cameras the zoom changes the focus slightly). Then the telescope is slewed to the target object. To do this you may need to remove the astrophotography camera, center the target visually in the eyepiece without touching the focus, reattach the astrophotography camera, and shoot. Some imagers take a series of test shots for centering and composing the picture.

Many of today’s types of telescope drives are accurate enough for you to make exposures up to a minute long without guiding. Generally, fast instruments with short focal lengths produce the best results and are more forgiving of errors in tracking and polar alignment.

Subtracting dark frames is very helpful for removing "hot pixels" and other artifacts. Nikon's Coolpix 995, Canon’s PowerShot G2, and others have built-in noise-reduction functions that automatically take a second exposure — the dark frame — with the shutter closed and use it for processing the original image. Some astro imagers use this feature, while others prefer to disable it and take separate images with the telescope covered, then manually subtract the dark frames from the originals with programs such as BlackFrame.

For most digital cameras, the way to increase exposure time to the lengths deep-sky objects need is to stack several images. This increases brightness and contrast and smooths out noise. Astro imagers use a variety of programs for this task, including Adobe PhotoShop, Maxim DL, AstroStack, and ImagesPlus.

Austrian astro imager Johannes Schedler does his stacking in Photoshop by aligning up to five raw images as separate layers. The first raw image is assigned to be the background, the second is layer No. 1, third is No. 2, and so forth. The background is set for normal (100 percent) opacity, while the succeeding layers are set at 50, 33, 25, and 20 percent opacity. The layers are then flattened (combined) to form a single image. "If I have 15 raws, I combine three groups of five images, then combine the resulting three images into one," he says.

Schedler further processes the final image in Photoshop by adjusting its brightness and contrast levels and using unsharp masking. "Usually, the colors need only slight correction, since the camera gives true-color rendition," he adds.

Photoshop's "Curves" function is especially valuable for deep-sky images. It allows you to adjust the brightness and contrast within different brightness ranges separately. In other words, it lets you custom-allocate all parts of the available dynamic range (that is, from 100 percent white to 100 percent black in your final version) so you can reveal everything that's captured in your image to best effect.

Before doing any such processing, of course, be sure to save an unprocessed copy of your image that you can revert to if you mess up. Remember, when touching up your photos, go easy. You are striving for realism, not artificiality. As soon as the photo starts to get the slightest "processed look" to an experienced eye, you have gone too far. Back up, or start over. 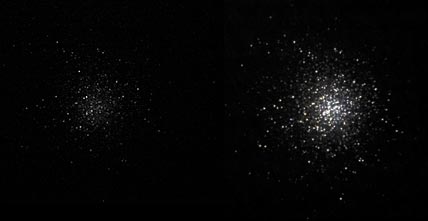 Riccardo Renzi, an associate editor of the Italian astronomy magazine Coelum Astronomia, captured these two views of the globular cluster M13 in Hercules with his 2.1-megapixel Sony CyberShot camera, 11-inch Celestron Schmidt-Cassegrain telescope, and 18-mm eyepiece. The left image is a single 8-second exposure; the right one is a combination of thirty 8-second exposures. (The ambient temperature was 27° F.)

For deep-sky use, today’s consumer digital cameras are still limited by noise and short exposure times compared to true astronomical CCD cameras (though the gap is narrowing). But digital cameras do offer most people the easiest and simplest way to venture into the joys of astro imaging.