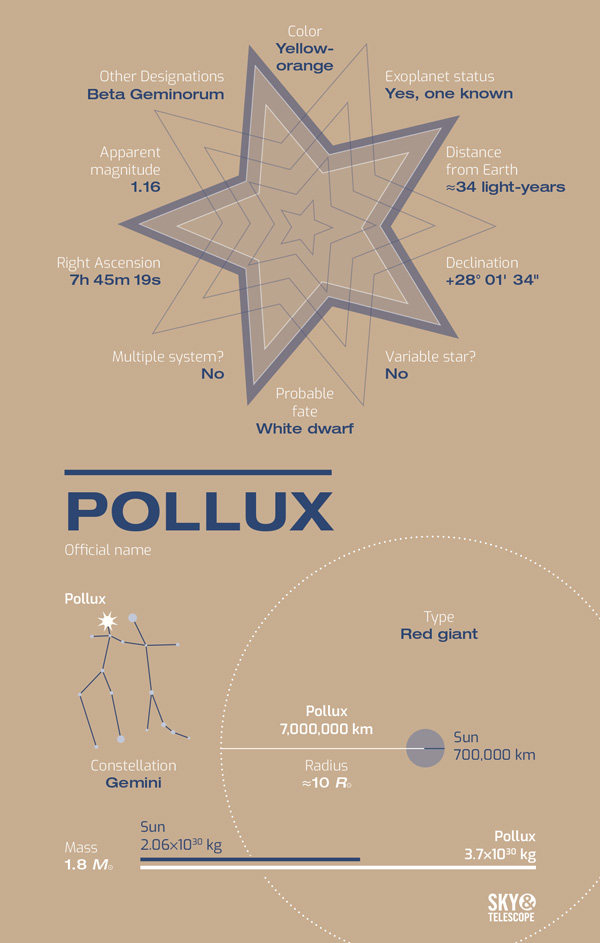 The constellation Gemini is well known by many backyard astronomers and for good reasons. Besides its fame as the radiant of the annual Geminids meteor shower (not to mention the location where Uranus and Pluto were first discovered), Gemini is an easy-to-find constellation that boasts a pair of respectably bright stars: Castor and Pollux. Both are interesting in their own ways, but in this article we’ll explore Pollux.

Pollux is a red giant star that has exhausted its supply of hydrogen, and is now fusing helium into carbon and other elements. Like other red giants, this process causes Pollux to become cooler than our Sun — hence its orange color — and much larger: 10 times the diameter of the Sun. At magnitude 1.16, Pollux is among the 20 brightest stars in either hemisphere. All of this makes it an interesting object, but another fact that sets Pollux apart is its exoplanet, discovered by its gravitational pull on its host star.

Exoplanets are no longer the rare objects they were decades ago; there are now thousands of known (and suspected) exoplanets. But many of them belong to dim or faraway stars. Exoplanets orbiting bright, familiar stars aren’t as common, so the one near Pollux is a delightful exception. Originally known as “Pollux b,” this exoplanet is now called Thestias. A gas giant with at least twice Jupiter’s mass, it orbits Pollux at a distance of 1.65 astronomical units — a little farther from its star than Mars is from the Sun.

While the star is currently twice the Sun’s mass, it’s expected to puff off enough of its outer layers to enable its core to collapse into a white dwarf.

Naturally, the most famous bit of mythology surrounding Pollux is the Greco-Roman story of the twin brothers Pollux and Castor, who sailed with Jason on the voyage for the Golden Fleece. But the idea that the constellation — and the stars Pollux and Castor in particular — depict twins isn’t an exclusively Greek concept; the idea was present in Babylonia as well. In India and North America, on the other hand, the two figures of Gemini symbolized a newly married couple rather than twins, while in China, the two stars represented “yin” and “yang.”

How to See Pollux

For easy evening viewing, Pollux is best observed during the winter months, when it sits high in the southern sky above Orion. Gemini is on the ecliptic, so the Moon (as well as the occasional planet) travels through or near the constellation frequently. Anyone familiar with H.A. Rey’s classic constellation drawings will remember that the stars Pollux and Castor represent the heads of each stick-figure twin. Pollux is the one on the left.

Pollux is the brightest star in Gemini, but you wouldn’t know if it from its Bayer designation. Originally created by Johann Bayer in 1603, the Bayer system of star naming often attributes the “alpha” designation to the brightest star in a constellation; for instance, Alpha Orionis for Betelgeuse in Orion and Alpha Ursae Minoris for Polaris in the Little Dipper. By this standard, Pollux should likewise be known as Alpha Geminorum, but it’s not. For Gemini, Castor is the Alpha star and Pollux is known as Beta Geminorum. Why?

The reason is that the Bayer system isn’t exclusively based on apparent magnitude, and there are many exceptions (Bayer, it seems, didn’t follow strict rules). In the case of Gemini, the name reversal may have to do with the fact that Castor rises earlier than Pollux. In any case, Pollux is the brighter of the two.

So if you’re looking for something a little different to observe during an upcoming clear night, give Pollux a try. While you’re looking, remember that somewhere near that point of light at least one exoplanet is quietly orbiting. It’s a fun idea to keep in mind!

I love this "Meet The Stars" Series! Thank you! Betelgeuse was interesting too. Was wondering if you might be able to do Orion's Belt (Alnitak, Alnilam, and Mintaka) for January when it's visible in the Northern Hemisphere. Thanks!

Of course Alpha Orionis is not the brightest star in that constellation either.