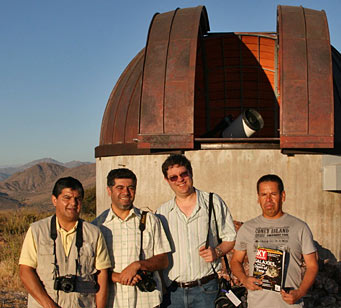 Editor in Chief Robert Naeye, pictured here (second from right) on a previous trip to Chile, will be accompanying the tour.

“I can promise that this will be a fantastic trip loaded with fun daytime activities and outstanding nighttime astronomical viewing from amateur observatories,” says editor in chief Robert Naeye, who will be accompanying the tour for his fourth astro-tourism visit to Chile. “With its high mountains, clear skies, and dry air, northern Chile is a mecca for both professional research astronomy and nighttime stargazing.”

We’ll start the adventure in Chile’s capital and largest city, Santiago. In addition to a tour of this thriving economic and cultural metropolis, we’ll visit the University of Chile’s astronomy department to talk to the scientists and see some of their historic telescopes.

Next, we’ll fly north to the beautiful coastal city of La Serena. Besides tours of La Serena and its neighboring city Coquimbo, we’ll spend an evening at Observatory Collowara, where Chilean amateur astronomers will show us the glorious deep-sky wonders of the Southern Hemisphere through their telescopes. If you’ve never seen the Large and Small Magellanic Clouds, and deep-sky spectacles such as the Tarantula Nebula and globular cluster 47 Tucanae, you’re in for a real treat!

The following day we’ll drive to the Cerro Tololo Inter-American Observatory, home to more than a dozen professional telescopes, including the 4-meter Blanco Telescope, which has been a workhorse of professional research since the 1970s. That night, we’ll visit the Observatory El Pangue, where expert amateurs will give us views though their telescopes, including a 25-inch Dobsonian and a 16-inch Schmidt-Cassegrain. 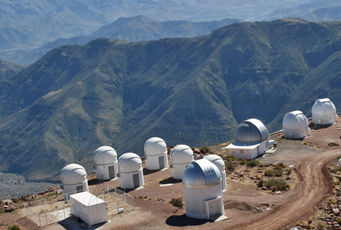 A cluster of small telescope domes at Cerro Tololo overlooks the foothills of the Andes.

We'll head inland the next day to visit the spectacular Elqui Valley, one of Chile’s great natural wonders. That night, we’ll visit yet another amateur facility — Observatory Cerro Mamalluca — for nighttime celebration and observing.

Then we’ll take yet another flight north, to the city of Calama in the Atacama Desert. We will then be transported by bus to the quaint tourist town of San Pedro de Atacama. San Pedro will be our home for the next several days as we visit spectacular desert scenery, including the Valley of the Moon, the Valley of Mars, and Rainbow Valley. We’ll see an active geothermal area and you’ll have the option to swim in mineral spring waters.

The trip will wind up with a flight back to Santiago, where everyone can stay a few extra days on their own, or fly back to their home countries.

See below for a detailed itinerary, and for more information, contact Spears Travel

March 27: We will meet at the SCL Santiago Airport, where private vehicles will bring you to Hotel Fundador, a four-star hotel located in the heart of Santiago. 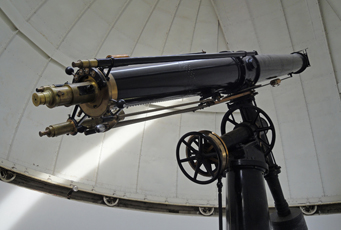 An historic refractor at the University of Chile in Santiago.

March 28: In the morning, we will visit the University of Chile's astronomy department. We'll see the department's antique telescopes and get a great view of the city. 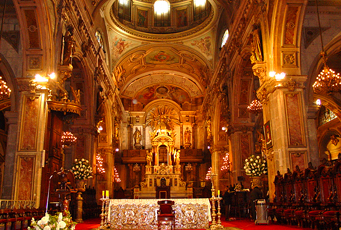 A richly adorned cathedral in Santiago.

Another important cultural area is the Bellas Artes neighborhood, where cafés and restaurants mix with theaters, museums, and bookstores. We will observe large historical houses and impressive buildings of important architectural value, including the Palacio de Bellas Artes, which houses the Museo Nacional de la Especialidad. We will also visit the Bohemian Bellavista neighborhood, a vast area that combines varied costumes and handicraft trade with restaurants, art galleries, theaters, and jewelry stores. The Cerro San Cristóbal Metropolitan Park offers one of the best panoramic views of the city. The poet Pablo Neruda built one of his homes here, and today it’s a museum. Finally, we will visit the exquisite neighborhoods of Las Condes, Vitacura, and Santa María de Manquehue. 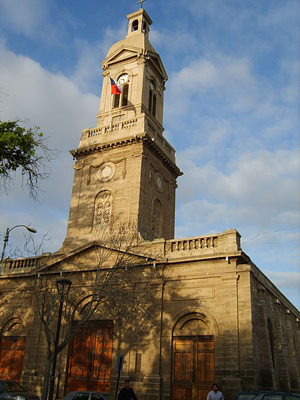 The Cathedral of La Serena

After we've settled in, we'll embark on a walking city tour of La Serena and Coquimbo. La Serena was founded in 1544 to facilitate maritime and terrestrial communications with Peru. The city was destroyed by native peoples (Diaguitas) and re-founded in 1549 by Francisco de Aguirre. The architecture in the downtown area has a colonial style, preserved by special laws that conserve the buildings and churches designated as national monuments.

In the evening, we'll visit the Collowara Observatory, located on the summit of Cerro Churqui, 37 miles (59 km) southeast of La Serena. Inaugurated on June 25, 2004, the observatory is a scientific, tourism and education center. The 14-inch Cassegrain-Schmidt telescope and three observation decks offer plenty of opportunity to appreciate the night sky. 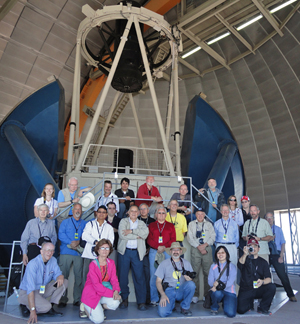 The Chile tour group of 2011 poses in front of the 4-meter Blanco Telescope at the Cerro Tololo Inter-American Observatory, Chile.

March 30: Today we'll undertake a full-day excursion to the Cerro Tololo Inter-American Observatory (CTIO) in the Elqui Province, home to seven giant telescopes. The observatory sits 7,000 feet (2,200 meters) above sea level, where the atmosphere is exceptionally transparent and dry, as well as unaffected by light pollution, making the location one of the best in the world for astronomical observations. CTIO's seven scopes are all equipped with cutting-edge cameras, photometers, and spectrometers, but the queen of them all is the 4-meter Blanco Telescope, which has been operating since 1976.

In the afternoon, we'll travel to Vicuña, eating a box lunch aboard the bus. We'll also have a snack at a local restaurant as we arrive before we settle in at the three-star Hotel Vicuña.

In the evening, we'll transfer to El Pangue Observatory for a night excursion. The observatory takes its name from the surrounding area, Hacienda El Pangue. The observatory's several telescopes include a 25-inch Newtonian, 16-inch Schmidt-Cassegrain, and a 12-inch Orion Sky Quest. 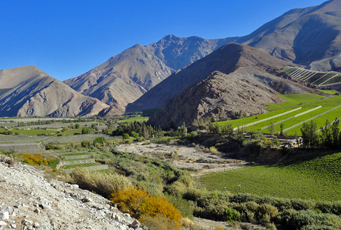 March 31: We'll take a full-day excursion to Elqui Valley, visiting en route the Puclaro Reservoir, the organic vineyard Cavas Del Valle, and the villages of Pisco Elqui and Paihuano. We'll return to Vicuña to visit the museum of the Nobel-Prize-winning poet Gabriela Mistral before taking lunch at a local restaurant.

In the evening, we'll visit the nearby Cerro Mamalluca Observatory to do some observing with the observatory's 12-inch telescope.

April 1: Today we'll fly to the Calama airport on our way to San Pedro de Atacama. Travel includes a transfers between the hotels and the airport. Once we arrive, we'll settle in at the four-star Hotel Casa Don Tomas before heading out for the city.

San Pedro de Atacama is considered the archaeological capital of the country due to its privileged geographical surroundings. The city is located 6,600 feet above sea level and is the center of the Atacama culture. The Padre Le Peige museum downtown exhibits about 4,000 rakes, innumerable mummies, weapons and pottery from the Atacama Indians. At night, we'll observe in Ayllu de Solor. 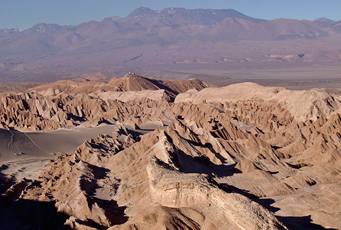 April 2: This morning, we'll relive the ancestral ritual of waiting of the sunrise. Very early in the morning, we'll travel less than 60 miles (100 km) from San Pedro of Atacama into the Andes mountain range. There, you will participate in one of the most astonishing phenomenon produced by nature, witnessing the contrasting colors produced by the steam columns in the highest geothermal field in the world. You'll have the unique opportunity to swim in the mineral-rich spring waters of El Tatio.

On our return we'll travel through the imposing Andes mountain range, observing plants and animals in their pristine, natural habitat against an incomparable volcanic backdrop. We'll visit Machuca, a small village with an antique church located near El Tatio, then we'll make an excursion to the Valley of the Moon and the Valley of Mars: salt mountain ranges formed by successive foldings from the bottom of an ancient lake. An easy trek will take us to the top of a great dune, where we'll be able to appreciate the sunset and the changes of colors on the mountains. 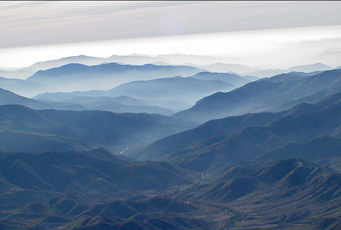 A foggy veil covers a valley in the Andes.

April 3: Today we'll visit the Domeyko Mountains, where you can enjoy the desert landscape and a view of the Andes, before heading to Valle del Arcoiris (Rainbow Valley). The valley owes its name to the red, grey, green, gray, and purple hills, whose colors come from their varied mineral composition. Our tour will continue to Hierbas Buenas, where you'll find volcanic rock formations and petroglyphs that tell the history of the peoples who lived here long ago. In the evening, we'll enjoy a final dinner at a nice local restaurant.

April 4: On our final day, we'll transfer from San Pedro de Atacama to Calama Airport before making the connection in Santiago for our international flights back home.

"The drivers were excellent. I felt that Sky & Telescope's reputation caused the observatories' guides to give us a much better tour than I suspect ordinary members of the public get."

"The professional observatory visits were wonderful."

"The trip was excellent."

"For novice amateurs like me who do most of our stargazing through Sky & Telescope magazine, it was quite an epiphany."