A Collection of Bipolar Planetary Nebulae 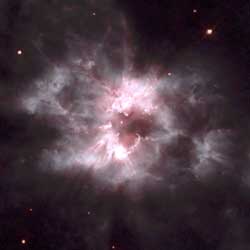 'Insanely complex' is how Richard Jakiel describes the inner region of NGC 2440. This planetary lies about 4,000 light-years away in the constellation Puppis.

March's icy Milky Way is a deep-sky observer's paradise. Splashy open clusters, huge emission nebulae, and numerous planetary nebulae await the telescope. Many of the best-known planetary nebulae are members of the bipolar class. Although only about 10 percent of all planetaries display an obvious two-lobed shape, researchers believe that most planetaries are double-sided to some degree, and that they display a bipolar form strongly during some stage of their evolution.

Beautifully symmetrical bipolar planetaries are among the most spectacular objects imaged by the Hubble Space Telescope and other large instruments. In 1987 planetary-nebula specialist Bruce Balick coined the term "butterfly nebulae" to cover their incredible diversity of shapes and color. Researcher Sun Kwok's latest book, Cosmic Butterflies, presents numerous images of the sky's most visually appealing and dynamically interesting bipolar planetaries. Many are fairly large and have high surface brightnesses, making them especially appealing for amateur astronomers. With the use of a nebula filter and high magnification, a diligent observer may even be able to discern structure often hidden by conventional photography.

Two Classics to Start With 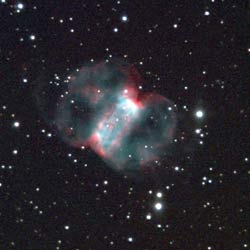 M76, the 'Little Dumbbell' in Perseus, shows a bright cork shape and much fainter loops extending from its sides. This image required 150 minutes of exposures through color filters with an SBIG ST8E CCD camera on a Meade 16-inch LX200 telescope operating at f/10.

One of the largest and brightest examples of the bipolar class is M76 (NGC 650/651), sometimes called the "Little Dumbbell" or "Cork Nebula." It's less than a degree north of Phi (φ) Persei in Perseus's outstretched eastern hand. The nebula was discovered by Pierre Méchain in 1780. William Parsons (third Earl of Rosse), discoverer of spiral structure in galaxies, noted strange, lobed extensions off either side of the main bar of M76. Accordingly, he included M76 in his original list of "spiral nebulae." Not until the 20th century was M76 recognized as a cloud of glowing gas expelled by a star.

Visually, M76 is a wonder object in almost any telescope, given a dark sky. In small instruments only the bright central bar shows readily. But an observer equipped with a 6- or 8-inch scope and a UHC or O III nebula filter will be able to make out Lord Rosse's outer "spiral loops." In my 17.5-inch Newtonian reflector, M76 offers rich texture to explore at medium to high magnifications. The main bar is bright and mottled, while the dim lobes extending from each side display delicate, almost filamentary structure. It's a shame that most images of this fine object are exposed only enough to show the central bar. Not until recently have I seen CCD imagers taking the plunge and making deep color exposures that capture the outer extensions.

A classic butterfly-shaped bipolar is NGC 2346, located 2/3° southwest of Delta (δ) Monocerotis. It has a bright, irregularly oval central bar with faint extensions protruding northwest and southeast. You may or may not see the star at its center, V651 Monocerotis; it's normally bright at magnitude 11.4 but has gone through spells of dipping to 14.5 (Sky & Telescope: September 1992, page 249). The actual source of the nebula is a hot, very faint companion to this star.

Using the Atlanta Astronomy Club's 20-inch reflector at 176x, I could detect an entire faint halo surrounding a bright inner disk. At much higher magnification, other observers have detected considerably more detail. Virginia deep-sky observer M. Eric Honeycutt writes, "Through my 22-inch at 500x and no filter, the two separate lobes were distinct yet were attached in the central region." He also notes that the central region "had a criss-crossing pattern." 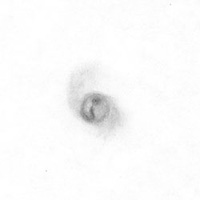 Richard Jakiel's sketch of NGC 2440. Click on the image to see his sketches of two other bipolar planetary nebulae — M76 and NGC 2371. He viewed them in a 20-inch telescope at 170x to 360x through narrowband nebula filters. North is up.

Farther north is NGC 2371/2, a fairly distinct bipolar near Castor and Pollux. As in M76, each of the bright lobes has its own NGC designation. In the Atlanta club's 20-inch with a UHC filter at 260x, I could plainly see two wedge-shaped knots or lobes connected by a thin waist and surrounded by a large, faint common envelope. The central star was quite faint but clearly visible without the filter.

NGC 2440 in Puppis is a remarkable and bizarre object, both photographically and visually. It was discovered by William Herschel in 1790, but its full shape was not resolved until much later. NGC 2440 features an extremely hot central star surrounded by an insanely complex core region and two pairs of lobes extending in different directions. In a sense, it's bi-bipolar. Visually it's a wonderful, bewildering object at high magnifications. My most memorable view of it was at the 1993 Winter Star Party in Vic Menard's 20-inch f/6.2 Dobsonian. At 358x the inner core almost defied description — a chaotic mass of bright jets and dark rifts with two jet-shaped lobes that looked almost like a cosmic water sprinkler. To this day it ranks as one of the most enigmatic objects I've seen.

The Small and Compact

Not all bipolar planetaries are easily resolved in amateur instruments. Some are so small that they only grudgingly yield detail and texture to the trained eye at high power. Jonckhere 320 (J320), Jonckhere 900 (J900), and Minkowski 1-7 (Mink 1-7 or PK189+7.1) are small, have high surface brightnesses, and are relatively young. Balick describes J320 as a "peculiar or early butterfly" bipolar; others have described it as showing two sets of extensions. J900 is another small planetary with an inner bipolar structure. Both have sufficient surface brightness to tolerate high magnifications. Not quite as compact is Mink 1-7, a bright oval disk oriented nearly north-south. All three should be visible in moderate-size instruments, but resolving small structures will require a large aperture and excellent seeing. 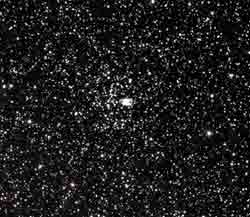 The sparse open cluster NGC 2818 in southern Pyxis contains the 12th-magnitude planetary nebula NGC 2818a. This blue-light image from the the Digitized Sky Survey is ½° wide. Click on the image for a closer view of the cluster and nebula.

The far-southern Milky Way offers several outstanding examples of the variety and complexity of the bipolar class. Easiest to view is NGC 2818a in southern Pyxis near Vela. It is one of the very few planetaries located within an open cluster (NGC 2818). The cluster is nothing very special, with 40 stars of magnitude 11.5 and fainter scattered across 7', but the nebula is an interesting sight 0.6' wide in the cluster's western side. It is a beautiful example of the bipolar class, with extensive lobes connected by a very thin waist.

Much older, larger, and more evolved is NGC 2899 deep in Vela. It's nearly as large as M76, but due to its far-southern location and its relatively low surface brightness, it's much less well known. At the 1993 Winter Star Party I observed its large, ghostly, somewhat twisted bipolar shape in a 15-inch telescope through an O III filter. 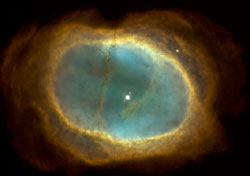 Only the bright, oblong inner region of NGC 2346 is visible in most telescopes. But a large aperture and a nebula filter reveal the big, bipolar wings to the upper right and lower left. NGC 3132 is nearly half a light year in diameter, and at a distance of about 2000 light years is one of the nearer known planetary nebulae.

Saving the best for last, NGC 3132 at the Vela-Antlia border is known as the Eight-Burst or Southern Ring Nebula. At first glance it looks like a rough clone of the more famous M57 in Lyra, and like that Ring it has recently been classified as a "diabolo bipolar," a normal bipolar that we observe down its long axis. Even the central star is deceptive. The true central star is a very faint (16th-magnitude) companion to the 10th-magnitude star that's easily visible in the center of the planetary. The companion is beyond amateur reach, being just 1.6" southwest of the primary. The ring shape is easy in almost any telescope, but as with most of these objects, you'll need high magnification and a nebula filter to pick out more elusive details.