The night sky is boundless, providing observers with a lifelong source of fascination and wonder. Once you open your eyes and engage your imagination, any clear night becomes one of discovery. For those new to this adventure, here are a pair of galactic sights to explore. Think of them as your first steps to the cosmos.

The Milky Way as a Deep-Sky Object 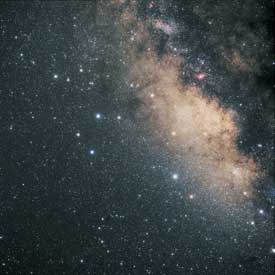 The Summer Milky Way features the constellation Sagittarius sprawing across clouds of stars at the center of our galaxy. A treasure chest of star clusters and nebulae — including the reddish Lagoon Nebula (upper right) — is accessible to binocular and small-telescope users.

You've seen it in science-fiction adventures: a starship hovers off a magnificent spiral galaxy — one with its gleaming central bulge wrapped in brightly glowing spiral arms. Have you wondered what that scene might look like in real life? You can find the answer on many dark nights in the country, where there's no light pollution. Arching across the sky during the summer in the Northern Hemisphere (winter in the Southern), from a thick mottled glow in Sagittarius through Aquila and Cygnus toward the north horizon via Cassiopeia and Perseus, this is what a galaxy looks like up close — very close! The view from the window of a starship would be hardly any different.

The Milky Way is the most magnificent deep-sky object of all. Under a dark sky it is truly one of nature's most impressive spectacles. Unfortunately, most city dwellers cannot see it at all. It's barely detectable from the suburbs. If you're planning a summer camping trip into the wilderness, add some galactic exploration to the itinerary. Since the chief requirement is a dark sky, check for dates when the Moon will absent for at least part of the evening; there is no point in trading one form of light pollution for another.

Although our view of the galaxy is from the inside looking out, the naked-eye Milky Way does bear a striking resemblance to photographs of edge-on galaxies. Facing Sagittarius we look toward our galaxy's crowded central region. The Milky Way's true center is hidden from view behind opaque curtains of dust and gas. However, there is much to see with binoculars or a small telescope. A casual scan will uncover numerous clusters and gas clouds.

To help get you going, our
interactive sky chart
is set for early evening on September 1st and plots a few of the more spectacular sights such as the Lagoon Nebula (M8), the globular cluster M22, and a pair of open clusters — M6 and M7. The chart is set at 40° north latitude for central North America. To see a view of the entire sky at this time or to adjust the sky scene, press the "Back To Combined View" button on the lower right of the screen. Then click on the "change" button to alter either the date and time or viewing location displayed by the chart. 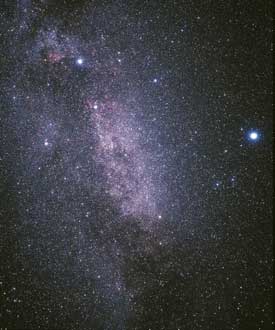 Thousands of stars crowd this image of the Northern Cross. Deneb is the bright star to the upper left; Vega is to the right.

Following the Milky Way northward into Aquila and Cygnus, we see dark clouds of interstellar dust and gas silhouetted against the background glow of a spiral arm rich with stars. Some of these dark clouds are obvious in binoculars, but many can be seen with the unaided eye too. North of Cygnus's brightest star, Deneb, is a particularly obvious dark cloud running perpendicular to the Milky Way.

A good place to end your sweep of the galaxy we call home is with the magnificent Double Cluster in Perseus. In binoculars and telescopes alike, this is one impressive sight! Each of these clusters of young stars is about 70 light-years across. Both lie about 7,300 light-years away.

As you explore the sky, try to keep in mind the perspective of your view. You are seeing the inner workings of a galaxy. No other galaxy will offer you anything approaching the view you get of the Milky Way with just your eyes — even if you have your very own starship.

The Andromeda Galaxy, M31, is one of the Milky Way's nearest galactic neighbors. It's easily visible in binoculars and to the naked eye under dark-sky conditions.

Along with its cool, lengthening nights, autumn's arrival in the Northern Hemisphere brings some of the year's most enjoyable observing. Shortly after darkness falls in late September, the Andromeda Galaxy is ideally positioned high in the east for Northern Hemisphere observers, near the W-shaped constellation Cassiopeia. If you are new to hunting deep-sky targets, the Andromeda Galaxy provides an enticing introduction. This enormous spiral galaxy is called Messier 31, or M31 — the 31st object in 18th-century French astronomer Charles Messier's catalog of nonstellar objects. The location of M31 within the constellation of
Andromeda
is marked on our interactive sky chart; click on the "change" button to alter either the date and time or viewing location displayed by the chart.

M31 is generally considered the most distant object visible to the unaided eye on a dark night. It is about 2.5 million light-years away — distant enough to reduce the combined luminosity of its estimated 400 billion suns to a faint glow. City lights wipe it out for naked-eye viewers, but you can still detect its elongated central portion with binoculars. Under a truly dark sky the binocular view of M31 is magnificent, extending much of the way across the field of view. Backyard-type telescopes can typically encompass only a portion of its glowing expanse in a single view, and rarely do they show any detail. The view of M31 through larger telescopes reveals dust lanes in the galaxy's spiral arms.

Once you become a deep-sky aficionado, you will spend the rest of your observing career hunting out galaxies much fainter and smaller than this one. If Andromeda's subtle beauty fails to impress at first, consider this: if our own Milky Way galaxy were as distant, it would prove to be an even greater observing challenge!