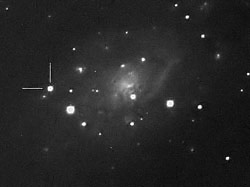 On July 31, 2004, Japanese amateur astronomer Koichi Itagaki discovered a supernova in the outskirts of the nearby spiral galaxy NGC 2403 (also known as Caldwell 7) in Camelopardalis. At magnitude 11.2, the supernova is unusually bright; its host galaxy is only 14 million light-years away. The new object is located at right ascension 7h 37m 17s, declination +65° 35' 58" (2000.0), placing it approximately 160 arcseconds east and 10 arcseconds north of the galaxy's nucleus. The announcement was made August 2nd on IAU 8377, issued by the Central Bureau for Astronomical Telegrams.

NGC 2403 is almost 100,000 light years across, and at magnitude 8.5 is fairly easily seen in a small telescope or even large binoculars under a dark sky free of light pollution (see the finder chart below). There are a number of foreground stars in the immediate vicinity of the galaxy that could be confused with the supernova; use the photo above to identify the correct one. The galaxy itself is clumpy due to the presence of large numbers of H II star-forming regions in its spiral arms. NGC 2403 belongs to the Coma-Sculptor Cloud of galaxies that includes our Local Group.

The 8.5-magnitude galaxy NGC 2403 lies off the nose of Ursa Major, the Great Bear, currently low in the north right after dark. A straggly line of 6th-magnitude stars points the way. The 10° scale is about twice the width of a typical finderscope's field of view. Celestial north is up and east is left; click on the chart for a larger version.