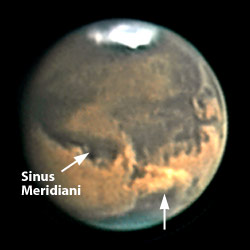 The latest Martian dust cloud, visible in this image acquired by Ed Grafton on July 30th at 9:29 Universal Time from Houston, Texas, has a distinctive yellowish color and a horizontal V-shape. No dust showed in a view of the same region taken 24 hours earlier. Grafton used a Celestron 14 at f/39 with a ST5 CCD to capture this Martian scene.

Less than one month after a localized dust storm appeared on the Martian surface between Syrtis Major and the Hellas impact basin, another dust cloud has sprung up, this time in the Chryse Planitia region.

As first reported by Texas amateur Ed Grafton, the storm likely began only hours before his July 30th image (left) was taken, because no dust showed on an image he acquired a day earlier. The yellow dust cloud can be seen in the Chryse Planitia (the plains of gold) and has a distintive V-shape. The next day the dust had spread south (up) into Eos and Margaritifer Sinus where a concentrated dust core was visible. According to the Oriental Astronomical Association's Mars Section Web site, the storm continued to expand, and by August 1st its western edge reached to Aurorae Sinus and its southern edge to Mare Erythraeum.

July's storm faded quickly, but no one knows if the current dust cloud will also disappear or grow into something more significant. (See "Storm Watch on Mars" for more on Martian dust storms.) Sky & Telescope's guide to this year's Mars apparition appeared in the
June 2003 issue. An abridged version is available online. To find out which side of Mars is visible at any particular date and time, see our handy Mars Profiler JavaScript utility.

Is Water Flowing on Mars?

Mars Flies By Jupiter in a Close Dawn Conjunction 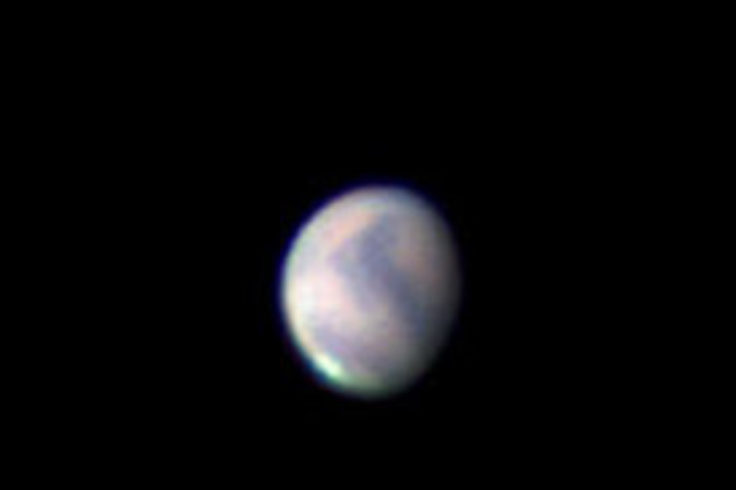