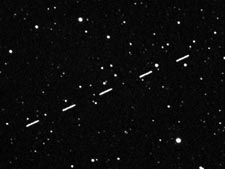 This composite of five 15-second exposures by Sky & Telescope's Rick Fienberg was taken through his Tele Vue-85 with a Meade Pictor 416XTE CCD camera. The image shows asteroid 2002 NY40 scooting to the northwest (upper right) a little after 1 a.m. EDT on August 18th.

From Uzbekistan and the Crimea to the UK, across North America, and on to Hawaii, amateur astronomers around the world had fine views of the close flyby of asteroid 2002 NY40 during the evening of August 17–18, 2002.

The experience of David Nance (Huntsville, Alabama) was typical of the many reports received at Sky & Telescope. He wrote: "I found 2002 NY40 easily and followed it for about 30 minutes. It was very bright (I'd estimate it at magnitude 9.5), and it was really spectacular sailing through the eyepiece, changing the patterns I formed with it and the framework of stars. My wife thought it was neat since it was so obviously not a 'fixed' star ... it looked a lot like a slow moving satellite on a really weird trajectory."

Chris Stephan, an AAVSO observer in Sebring, Florida, used his 14.25-inch reflector with a 32-mm wide-field Erfle eyepiece to find and track the asteroid. "I found the object very quickly and was amazed at how fast it was traveling. I was hoping to catch a chance stellar occultation, but during the time period I observed, it just passed between stars with a few very close appulses. Another interesting thing was that the asteroid seemed to fluctuate slowly in brightness by about 0.2 magnitude within a 4 to 5 minute time period." 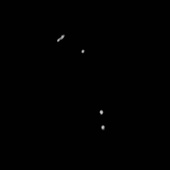 Using a Meade LX200, Eugene Nolan captured a 44-frame sequence showing the motion of 2002NY40. Click on the image to view the animation; it may take some time to download. The original sequence was 44-seconds long but has been compressed for this animation.

Most observers were surprised by the rapid motion of the asteroid through their field of view, and some also reported that 2002 NY40 had a definite color. "I never anticipated how quickly the asteroid would sweep through the field even though advanced planning revealed such," wrote Clay Sherrod who watched from his observatory in Conway, Arkansas. "In the 4-inch guide refractor of the scope, the motion of this object was just incredible, not unlike that of a slow-moving satellite seen through the same telescope. The Near Earth Object was distinctly reddish in color; this was unmistakable when it passed very near similarly bright stars within the visual telescopic field of view."

Not everybody employed a large-aperture telescope at high power to watch the flyby. Becky Ramotowski of San Antonio, Texas, used her 80-mm refractor and a 32-mm eyepiece to follow the asteroid. "I was able to find it easily after picking out a star field and just waiting for it to pass through," she wrote. "It was quite amazing to visually watch it zoom through space! I did not take any images, I just enjoyed the 'ride', and was it ever a fast one! It made for an exciting evening of viewing, especially since we had a nice ISS and Hubble pass to get us warmed up!" 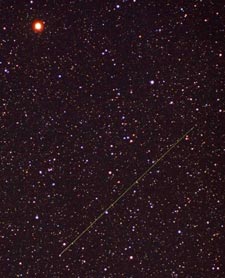 Taken at the Crimean Laboratory, this 20-minute exposure tracks the asteroid as it moves from lower left to upper right. The bright red star is Gamma Sagittae.

After observing 2002 NY40 with his 8-inch telescope, Timo Karhula (Sweden) decided to try using binoculars. "At local midnight (22:00 UT), when the asteroid moved into Vulpecula, I pointed my 20 x 100 binoculars towards it. It took a couple of seconds to discern a change in its position, but then the motion was obvious. Then I took out my 7 x 50 binoculars, targeted M71, and waited. At 22:43 UT, I could just see the 10th-magnitude asteroid. With the hand-held 7 x 50s I was not able to notice the immediate movement of 2002 NY40, but after a few minutes I could see the speck's motion."

The most remote observation report received so far comes from Tom Krajci in Uzbekistan. "Several of us had a blast finding and tracking the motion of 2002NY40 the evening of August 17th in Tashkent, Uzbekistan. Our first attempts at finding this fast mover were unsuccessful until we got more methodical. Using JPL HORIZONS we generated accurate
coordinates for every five minutes. It was crucial to use the proper latitude and longitude of our location. Next we plotted the expected locations of the asteroid on the appropriate Uranometria chart, star hopped to that region (using my 10-inch, f/7.2 home-made Dobsonian), and kept a patient watch for a moving interloper. After two minutes we confirmed the asteroid and followed it for about 30 minutes. The asteroid's motion was most obvious when it passed near a star."

Thanks to everyone who submitted observing reports to Sky & Telescope.

For those interested, here is the original article that showed the path of the asteroid through the sky.