Auroras Light Up the Sky 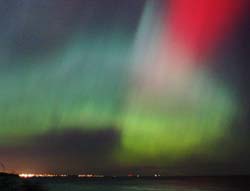 Part of Wednesday morning's aurora as seen from Metchosin, British Columbia. 'What a great display here!' writes photographer Sherry Buttnor. 'For six hours we had auroral activity somewhere in the sky, and often almost everywhere. Virtually every kind of auroral structure was seen, and the colors were lovely.' She grabbed this snapshot with a Canon Powershot A70 camera.

A powerful blast of solar wind swept by Earth in the early morning hours of Wednesday October 29th, setting Earth's magnetic field to shaking and lighting night skies with colorful auroras. The blast — a coronal mass ejection, or CME — arrived around 1:30 a.m. Eastern Standard Time (6:30 Universal Time), just 20 hours after it erupted from an extremely powerful flare on the Sun. Skywatchers as far south as California, New Mexico, Arizona, and Texas who kept late-night vigils, after being alerted here and elsewhere, were rewarded with grand displays. (Unfortunately, the east coast of North America was generally clouded out.)

The solar flare (rated X17) was the third strongest recorded since at least 1976. A couple of telescopic Sun observers even saw it happening through plain, white-light filters. (Most solar flares are visible only with a hydrogen-alpha filter.) It erupted in the midst of one of the two giant sunspot groups that are currently marring the Sun's disk — both of which are easily visible to the naked eye (through a safe filter).

With the Sun in its most active state since solar maximum two or three years ago, additional flares, CMEs, geomagnetic disturbances, and auroras are possible for the next several days. In fact, spot region 10486 let off yet another very powerful flare (rated X11) at 3:49 p.m. Eastern Standard Time (20:39 UT) on Wednesday the 29th. The CME resulting from this event may reach Earth on Thursday night and relight the skies at that time — and maybe Friday as well. 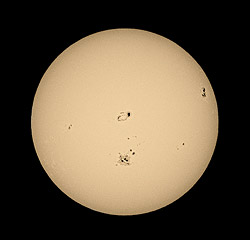 This image shot in white light on October 28, 2003, shows two very large naked-eye sunspots and a third massive group about to pass over the Sun's limp. Group 10486 (bottom) produced a X17 class flare, one of the largest coronal mass ejections ever recorded.

The two big, naked-eye spots now in view are actually the second and third to appear during the current spot outbreak, which began on October 18, 2003. The first one is rotating out of view around the Sun's western limb, as seen in the image at right. Says Sky & Telescope's Alan MacRobert (who keeps a #14 arc-welder's filter at his desk), "These are the easiest naked-eye sunspots I've ever observed."

The geomagnetic storm that accompanied the Wednesday auroras was ranked G5, the most powerful rating. Major solar flares and geomagnetic storms can disrupt power transmission networks, black out some radio communications, and cripple electronics on satellites temporarily or permanently. There were few immediate reports of ill effects, however.

Sunspots are relatively cool regions in the Sun's photosphere (visible surface). They form where solar magnetic fields lock onto the Sun's churning ionized gas and hold it in place long enough to cool. The photosphere's average temperature is 5,700° Kelvin, but in a sunspot's dark center (umbra), where the field is strongest, it's about 2,000°K cooler. If you could view a sunspot by itself, it would appear blazingly bright. It appears dark only in contrast with its even brighter surroundings. The umbra of a spot is typically surrounded by a lighter penumbra, where the magnetic field allows the gas more motion.

If it's cloudy at your site, you can view the latest solar images from the SOHO spacecraft (click on "Latest Images," then "Near real time images)." Also check out SOHO's MPEG movies of growing spots and coronal mass ejections. 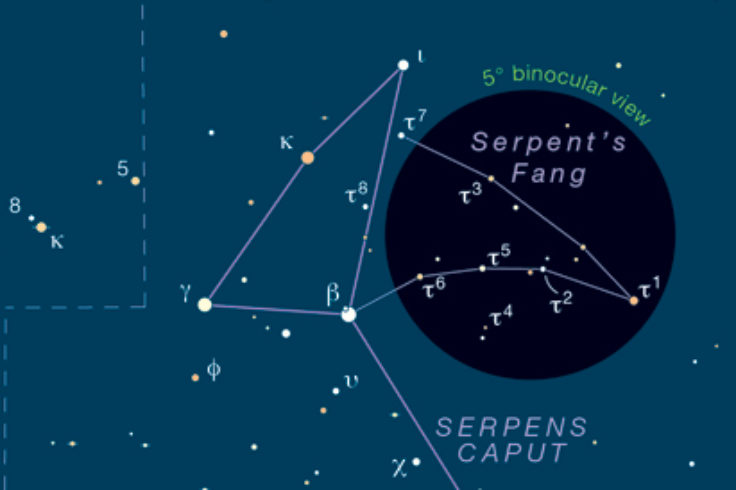