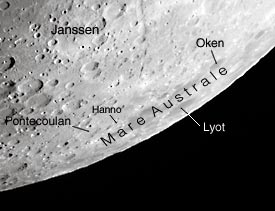 This image of the southeastern limb of the Moon was taken on June 27, 2001, when a favorable libration brought Mare Australe into view. Sky & Telescope associate editor Gary Seronik captured this view with a homebuilt 8-inch f/6 Newtonian reflector and a Canon digital camera.

The southeast limb of the Moon is so different from the rest of the lunar surface that it seems almost like another planet. It lacks the clean distinction between mare lava and highland, having instead a series of widespread mare deposits cluttered with old impact craters.

From various lunar atlases it's clear that this area of the Moon is much less frequently imaged than any other limb region. Perhaps that's because sunrise occurs here when the Moon is a thin waxing crescent hanging low in the evening sky, and sunset occurs at full Moon, when glare often discourages observers. But the region offers some rewarding sights if you take the time to seek them out.

The southeast limb region is mostly nondescript, but when libration tilts the area into view a wide expanse of mare patches, collectively named Mare Australe, becomes visible. The remarkable nature of this “Southern Sea” was not understood until U.S. Geological Survey scientists Desiree Stuart-Alexander and Keith Howard examined Lunar Orbiter photographs of the region. They found that the mare patches on the floors of nearly 200 craters defined a circular area about 900 kilometers (560 miles) in diameter, presumably delineating an ancient impact basin. James L. Whitford-Stark, then a graduate student at Brown University, realized that the putative Australe basin was approximately the same size as the Orientale basin but otherwise was as different as could be imagined. While Orientale, the Moon’s youngest basin, has well-defined concentric rings and massive ejecta deposits outside the rings, Australe has neither. 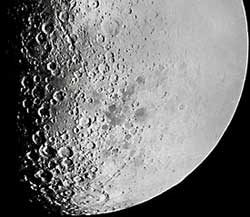 This Lunar Orbiter image shows the roughly circular outline of the proposed Australe impact basin, defined by a mosaic of dark-floored craters.

Undeterred by the lack of traditional evidence, Whitford-Stark elaborated the suggestion that Australe was an ancient impact basin and deduced a history different from any other known lunar basin. He proposed that very early in the Moon’s history a multi-ring basin was formed but because this was still a time of intense bombardment, its original multi-ring structure was completely destroyed by later cratering. A few hundred million years later lavas rose up faults and erupted onto the floors of many of the impact craters within the basin. Some of these craters were completely submerged by lavas, and others were only partially filled. Australe provides a model of how the most ancient basins would be battered beyond recognition unless their low spots were filled later by mare lavas.

All this speculation based on Lunar Orbiter photos of a feature partially out of view on the far side of the Moon doesn’t belong in this article unless we can see it from the Earth. 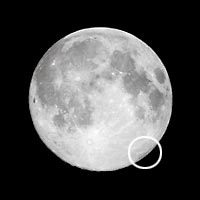 Moon image with Mare Australe highlighted. This region is visible August 12th to 15th. These dates indicate approximately when favorable libration and illumination conditions occur for viewing this mare.

Well, it’s challenging, but we can. Like Orientale on the southwest limb, aspects of Australe can be detected at various angles of illumination, but only during favorable librations. Under a high Sun the basin gives itself away by its very dark surfaces; when the Sun is low the smooth crater floors become conspicuous. You have found Australe when you see craters with low rims and dark floors north and east of the normal craters Pontécoulant and Hanno. The prominently rimmed but dark-floored Oken crater (72 km) should be identifiable much of the time, but nearby Lyot (140 km) at 84° east longitude will be quite challenging!