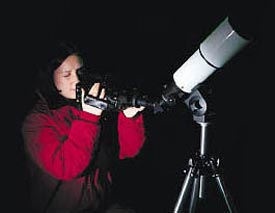 For amateur astronomers, current camcorder models models possess the sensitivity and compactness to be attached to backyard telescopes. Now you can time and record ephemeral events rather than just eyeballing them.

When camcorders first appeared on the consumer-products scene, few guessed that they would turn into scientific instruments for amateur astronomers. But recently they have begun to revolutionize the decades-old practice of timing occultations.

A camcorder, like other television cameras, takes 30 pictures per second. If you replay an occultation recording in slow motion, the star is there in one frame and gone in the next. If the frames can be matched to an accurate time base, the time of the star's abrupt disappearance (or reappearance) can be found to within 1/30 of a second. This is about 10 times more accurate than traditional visual methods.

The best source for accurate time is a shortwave radio. Record the time signals that are continuously broadcast by WWV or WWVH at 2.5, 5, 10, 15, and 20 megahertz. If their reception is poor try CHU at 3.330, 7.335, or 14.670 MHz, though WWV or WWVH are preferable. The camcorder should be kept running long enough to record at least three of the minute beeps.

What if you don't have a shortwave radio? You can simply download accurate time over the Internet.

For major, well-publicized occultations, the International Occultation Timing Association (IOTA) sometimes sets up a system to allow people without shortwave radios to synchronize their videos by filming a piece of a television broadcast just before and after the event. However, a problem has become apparent with this timing method. IOTA has found that programs aired "simultaneously" in different cities, or even over different cable lines in the same area, can be out of synch by as much as several tenths of a second. The television method should be used only if you record an over-the-air broadcast (not cable) that you know an IOTA coordinator in your area is also recording along with WWV time signals for calibration. IOTA will provide full instructions before major events. For more on this method see IOTA's Web site. 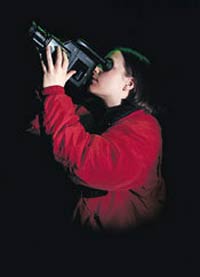 If you own a camcorder, you already have all the equipment you need to record lunar occultations of bright stars. Just point n' shoot while recording accurate time signals.

For lunar occultations of bright stars, IOTA encourages anyone with a camcorder simply to point it at the Moon! Depending on the Moon's phase, a camcorder with a 12x optical zoom lens (now rather common) can record stars as faint as about 3rd or 4th magnitude on the dark limb. In August 1997 I easily recorded the reappearance of 3.9-magnitude Gamma Tauri on the dark side of the 45-percent sunlit last-quarter Moon with my 12x camcorder.

Occultations can be recorded simply by aiming a camcorder down the eyepiece of a telescope. Use your scope's lowest-power, widest-field eyepiece. Zoom in to achieve focus, then zoom out to get good lighting balance and field size. It doesn't matter if the hand-held view is unsteady.

Some of the easiest events to capture are those when the Moon is highly gibbous; the terminator is near the star, good for the camcorder's autofocus. Stars are much more difficult to record with a camcorder aimed into an eyepiece if none of the Moon's bright portion is in the field of view.

We also need your latitude, longitude, and elevation to an accuracy of 30 feet or better. A GPS receiver should be able to provide this information. If you don't have a GPS unit, you can specify your position precisely with respect to a nearby landmark that appears on a detailed topographic map, such as the center of a street intersection. One way is to measure the distance down the street from an intersection, then the distance at right angles from the center of the street to your observing site.

More on upcoming occultations and camcorder timing techniques can be found on IOTA's Web site and in their Occultation Newsletter.