Ceres and Melpomene in Binoculars

Conveniently skimming the star pattern of Cetus, minor planet Ceres should be an easy target for binoculars during the remainder of 2002. Smaller Melpomene, a little closer to Earth and almost as bright as Ceres, should be equally easy during most of this period. Tick marks show an object’s location at 0h Universal Time on selected dates. From September through November, both asteroids are brighter than the faintest stars on this chart (magnitude 9.5). Click on the image to see the entire chart.

The number of known asteroids has skyrocketed in recent years, but very few of these tiny bodies ever come within easy reach of the simplest optical aid. This year we have a somewhat unusual situation, for skywatchers can track down two of them, Ceres and Melpomene, as soon as the sprawling constellation Cetus, the Whale, climbs sufficiently high in the east. All you need are binoculars and the chart at left.

When viewed through binoculars (or, for that matter, any Earth-based telescope), Ceres appears as a point of light just like the surrounding stars. Throughout September and October, in fact, Ceres will be four to six times brighter than the faintest stars shown on our chart. Finding it will be especially easy because it passes fairly close to many bright stars.

The ease with which we can spot Ceres helps to explain why it was the very first asteroid discovered, just two centuries ago. On January 1, 1801, in the course of compiling a star catalog, Italian astronomer Giuseppe Piazzi came across a star in Taurus that was missing from the reference works available to him — a little surprising, perhaps, though not unusual in his line of work. But it was Piazzi’s custom to measure his star positions on more than one night to ensure they’d be accurate, and on January 2nd he found that this particular star had moved. He diligently measured its position for three more weeks, finally writing to a friend, "It has occurred to me several times that it might be something better than a comet."

Indeed, dozens of other European astronomers were already actively searching for a supposed "missing planet" between Mars and Jupiter. What spurred them on was a curious gap in the numerical sequence of planetary distances known as the Titius-Bode law. But Piazzi’s discovery of Ceres was pure serendipity — and neither he nor anyone else was prepared for the onrush of similar discoveries to come.

Ceres is one of very few asteroids whose mass has been determined by its gravitational effect on other solar-system bodies. From this and its known size of about 934 kilometers (580 miles), we can calculate that it has a density of 2.0 grams per cubic centimeter, rather like brick. Studies of the way it reflects light suggest it may even have frost or water vapor at its surface.

The first known asteroid, 1 Ceres, is also the largest body in the asteroid belt. These Hubble Space Telescope images, taken in ultraviolet light about 3 hours apart, reveal a vague, dark circular feature about 250 kilometers across. Astronomers propose to name it Piazzi, to honor the asteroid's discoverer.

In 12 years’ time we're going to learn immeasurably more about this object. Last year NASA approved development and launch of the Dawn mission as part of its low-cost, rapid-development Discovery program. Dawn will involve a probe that is scheduled to leave Earth in May 2006 and arrive at the minor planet Vesta in June 2010. After a tour of duty orbiting that asteroid for a year, the craft will depart for Ceres. Between August 2014 and July 2015 it will study Ceres at close range, at which point an extended sojourn to other members of the main asteroid belt remains a possibility.

Observers who have been watching Ceres over the years know that it can become brighter than this year’s peak magnitude of 7.6 around October 9th, the date of its opposition to the Sun. Like all bodies in the solar system, Ceres’ distance varies. A particularly favorable opposition is due in 2004, when Ceres will reach magnitude 6.8. In 2012 it will once again be only as bright as 7.6.

Melpomene at Its Best 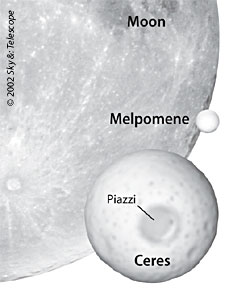 The sizes of Ceres and Melpomene relative to the Moon. An image of Ceres taken with the Hubble Space Telescope (see previous page) shows a vague surface feature 250 kilometers wide, possibly a huge crater as siumlated here. The name Piazzi has been proposed.

Our other bright asteroid is making an appearance under the most favorable of circumstances. On October 2nd, when Melpomene reaches opposition at magnitude 7.8, it is virtually at the same brightness as Ceres. While Melpomene is considerably smaller, with a diameter of only about 150 km, it's currently closer to Earth. It also has an albedo (surface reflectivity) twice that of Ceres.

Discovered on June 24, 1852, by English astronomer John Russell Hind, Melpomene became the 18th known minor planet of its day. Unlike Piazzi a half century earlier, Hind was actively looking for these tiny bodies. Yet he is perhaps better known today for Hind’s Variable Nebula (NGC 1555), located near the variable star T Tauri. During his life Hind found three comets, two of which bear his name, and 10 minor planets in all.

We know much less about Melpomene than about Ceres. But Melpomene shot to prominence in December 1978 when its occultation of the 8th-magnitude star SAO 114159 occurred in two parts, suggesting that this asteroid may have an orbiting satellite. (The occultation also occurred in steps, revealing the star itself to be a very tight binary!) But another occultation by Melpomene, successfully observed in August 1981 by Australian amateur David Herald, failed to have any secondary events. Searches conducted with the University of Hawaii’s 2.2-meter telescope in 1985 and the Hubble Space Telescope in the mid-1990s did not reveal a satellite either. 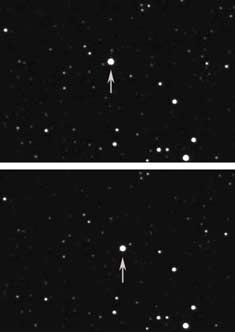 In a telescope, an asteroid looks just like a star — except that it changes position. These CCD images show 2 Pallas (arrowed) moving through a star field in Delphinus on the night of August 31 – September 1, 2002. The field is about 25 arcminutes wide, with north up and east to the left.

Part of the reason Melpomene is so bright this year has to do with its orbit. On October 28th, just a few weeks after opposition, this minor planet arrives at perihelion (nearest the Sun). With a period of just under 3.5 years, favorable observing seasons occur at every second revolution for Melpomene. In 2009 it will become as bright as magnitude 7.9, and in 2016 it will reach 8.0 for a few weeks.

But in 2002 there’s a special reason for observers to track down Melpomene. At the beginning of December, when this asteroid has faded to magnitude 9.3 but remains quite easy to spot, our chart shows it passing only about 3° southeast of 8.5-magnitude Ceres! It's uncommon indeed for two bright minor planets to be so easily observed in the same binocular field.