Vesta and Ceres, the two brightest asteroids, are normally far from each other in the sky. But swift Vesta, with an orbital period of 3.6 years, is catching up to slower Ceres, with its 4.6-year orbital period. This year (2011), Vesta is in Capricornus, while Ceres is just 1½ constellations east on the Aquarius/Cetus border. In 2012 they will be side by side in Taurus. 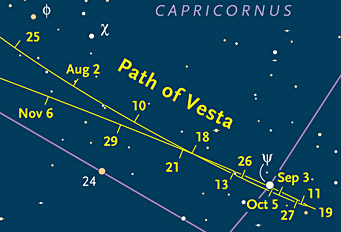 Vesta passed through opposition August 6th; Ceres will do so September 16th. This is when each is about at its nearest and brightest, and when it rises around sunset and is highest around the middle of the night.

This is an extraordinarily good apparition for Vesta, which was magnitude 5.6 around opposition — just about as bright as it can ever get. This is also a banner year for Vesta because NASA's Dawn spacecraft is due to start orbiting it in July and begin high-resolution mapping in August.