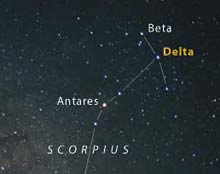 The brightest star near Antares is Delta Scorpii, now in its 36th month of an unexpected flareup. Photographs don't show the brightness differences between stars well, but to the naked eye Delta is obviously the brightest star in the nearly vertical row of three forming the head of Scorpius. Outdoors at night, estimate Delta's magnitude by comparing it with Beta, magnitude 2.6, and Antares, 1.1.

For the fourth summer in a row, the head of the bright constellation Scorpius, the Scorpion, carries a note of excitement. Delta Scorpii, normally magnitude 2.3, became a variable star in July 2000, flaring in a matter of weeks to magnitude 1.9. In the next few months it dipped almost back to normal, then rebrightened. It has fluctuated between about magnitude 2.0 and 1.6 ever since. As of late June 2003, it was hovering at 1.6 or 1.7, barely under the official definition of a 1st-magnitude star (1.5). "The outburst keeps gaining strength," writes its discoverer, Sebastián Otero of Buenos Aires, Argentina. The naked-eye look of Scorpius is visibly changed from its age-old state, and Delta stands out as the brightest thing in the big swath of sky between Antares and Spica.

Delta Scorpii is a large, hot, rapidly rotating star of spectral type B0 about 400 light-years away. Spectra show that it began throwing off luminous gas from its equator when the outburst began. A fainter companion star orbits it in a very eccentric, looping orbit; the two stars swing close by each other (separated by about 20 times the primary star’s diameter) every 10.6 years. The last time this happened was in the summer of 2000, suggesting that this particular pass somehow triggered the flare-up. No one knows what Delta Sco will do next.

Use our
interactive sky chart
to locate the summer constellation Scorpius. The chart shows the sky for 1:00 a.m. on July 1st, 11:00 p.m. on August 1st, and 9:00 p.m. on September 1st. To adjust the date and time, highlight the month, day, or hour and click the "+" or "-" button. Press the "Change" button above the listed location to alter your viewing location.