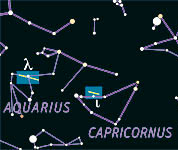 Uranus and Neptune spend 2006 in Aquarius and Capricornus, respectively. The small blue boxes on this key chart show the areas covered by the larger charts below.

This year it's easy to find Uranus and Neptune — if you know the constellations Aquarius and Capricornus and have binoculars or a small telescope. Each planet happens to be in the low-power field of a naked-eye star plotted on the constellation chart at left. Aim your binoculars at that star, then use one of the close-up charts below to identify the planet among the other points of light in the vicinity.

Uranus's reference star is orange Lambda Aquarii, shining dimly to the naked eye at magnitude 3.7. Uranus glows at about magnitude 5.8. It's at opposition in early September.

Neptune's signpost is 4.3-magnitude Iota Capricorni. This planet, magnitude 7.8 or 7.9 all year, comes to opposition in mid-August.