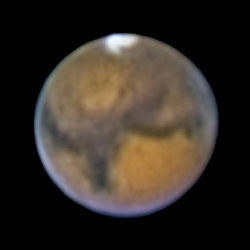 Mars on the night of Septembert 6/7; south is up. Syrtis Major is the dark triangle to the lower-left of center with the light-colored basin Hellas visible above it. Dark Sinus Sabaeus stretches off to the right, extending into Sinus Meridiani. Senior Sky & Telescope Dennis di Cicco shot a minute of video with a Philips ToUcam Pro video camera attached to his 16-inch Meade LX200 at f/28. After processing with Registax, 105 of the best frames were stacked to produce this view.

Now that Mars's record-breaking close approach is history (it happened on the night of August 26–27, 2003) is the show over?

Mars remains just as big and bright, for all practical purposes, during the first half of September. In fact, until the end of the month it's larger and brighter than it will be during its next opposition in late 2005. Moreover, in one way the show is getting better than ever! Every day Mars rises higher in the sky earlier in the night, which makes it easier to view at a more convenient hour.

Mars is the breathtakingly bright "star" in the southeast after dark. You can't miss it. Mars shines many times brighter than any actual star in the sky. Anyone can see it, no matter how little you know about the stars or how badly light-polluted your sky may be. It gets higher as the evening grows late, and by 11 p.m. or so, it's at its very highest in the south. The planet displays a clear, fiery yellow or yellow-orange hue, due to rust-like iron compounds in its surface. 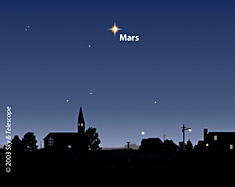 Because it is close to Earth in space, Mars looks like a dramatically bright 'star' in the southeast at dusk. It's highest in the south by 11 p.m. daylight saving time and sets in the southwest before dawn.

The brightest yellow areas are deserts covered by fine, windblown dust. The darker markings are terrain displaying more areas of bare rock (much of it ancient lava flows) or darker dust. Mars rotates every 24½ hours, so you can see it turning in just an hour or two of watching. 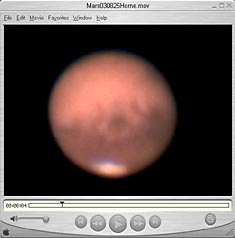 The dark circular feature near the center of this video frame from August 25, 2003, is Solis Lacus, sometimes called the Eye of Mars. Click on the image to see the 1.1-megabyte QuickTime movie from which this frame was taken(requires QuickTime Player or another MOV-compatible media player).

To see much detail on Mars, you’ll need at least a moderately large telescope with high-quality optics. (For the lowdown on how to select a telescope wisely, see "Choosing Your First Telescope".) You'll also need to wait until Mars rises high in the sky, well above the thick, murky layers of atmosphere that hug the horizon. And the "seeing" must be good — that is, the tiny heat waves that constantly ripple through the Earth's atmosphere should be minimal. These waves cause highly magnified telescopic images to constantly shimmer and fuzz. The quality of the seeing changes greatly from night to night and sometimes from minute to minute.

There has been some confusion over exactly how much of a record Mars set on August 27th. Sky & Telescope senior editor Roger Sinnott got to the bottom of the matter, finding 57,617 BC to be the correct date when Mars last came this near to Earth. 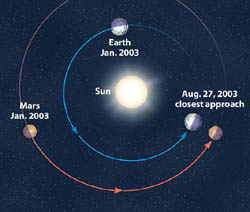 The orbits of the Earth (blue) and Mars (red) around the Sun. Mars moves in a noncircular orbit, and it was closest to the Sun almost precisely when Earth moved past it on August 27th. On that date at 5:51 a.m. Eastern Daylight Time, the two planets were only 34.6 million miles apart — their closest pairing in nearly 60,000 years. The Sun and planet disks are not shown to scale.

Mars was nearly this close in 1988, and for all practical purposes it looked much the same as now. That year it reached an apparent diameter of 23.8 arcseconds as seen in a telescope; this year it topped out at 25.1 arcseconds wide (the angular size of a penny seen at a distance of 500 feet). And Mars will make another good pass by Earth in October 2005, appearing 20.2 arcseconds wide.

Read more about Mars is in the June, July, and August issues of Sky & Telescope and online in "Mars at Its All-Time Finest". 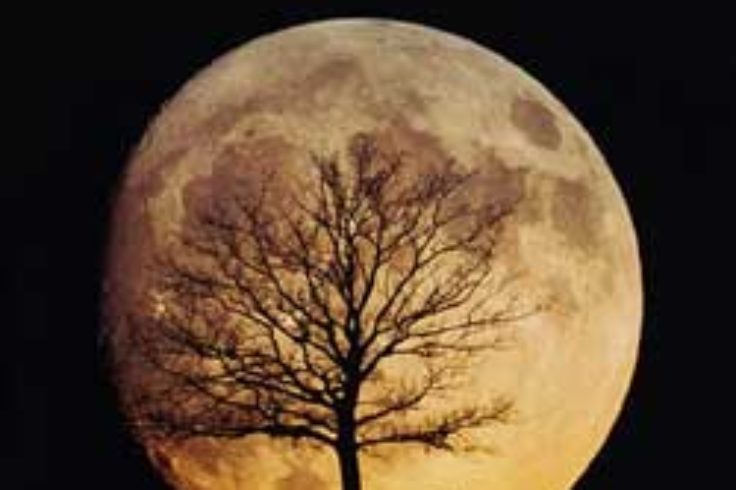 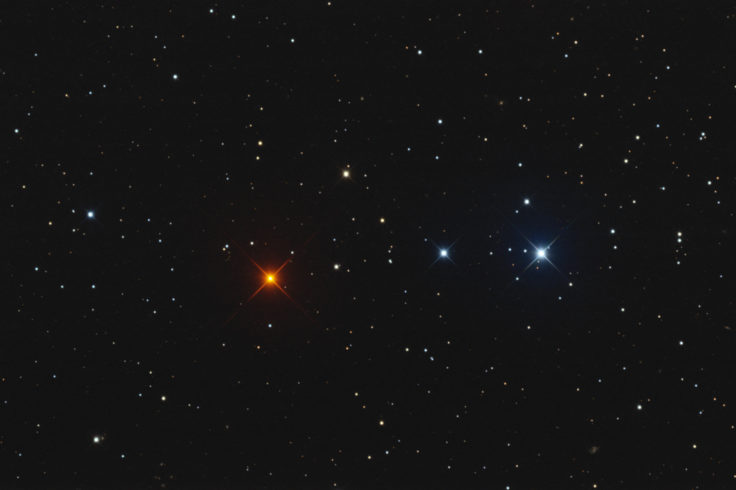