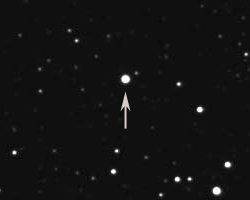 In a telescope, an asteroid looks just like a star — except that it changes position. Click to see two CCD views of 2 Pallas (arrowed) moving through a 25-arcminute-wide star field in Delphinus on August 31 – September 1, 2002; the 10-second exposures were shot 2 hours apart.

With its unusually high orbital inclination of 35°, the large asteroid 2 Pallas often roams far away from the ecliptic in our sky. So in 2005 you can follow Pallas with binoculars or a telescope as it wanders north out of the zodiac from Virgo into Coma Berenices. The orbit of Pallas is also rather elongated for a minor planet's (eccentricity 0.23), which means that some of its apparitions are closer and brighter than others — and this year’s happens to be better than average.

The chart below shows where to pinpoint Pallas. March was when Pallas was closest and brightest; it shone at magnitude 7.1 around the time it reached opposition on March 23rd.

With stars plotted to magnitude 10.0 (and galaxies to about 10.3), this chart shows the path of Pallas from early April to July 2005. Brilliant Jupiter is not far south of (below) this field. Click for full chart.

During much of this time, especially in late March and early April, Pallas is crossing the vast Virgo Galaxy Cluster — most of whose members are at least a couple of magnitudes fainter and require a bigger telescope to be seen.

Pallas is about 525 kilometers in diameter — “minor” as planets go, but a very substantial world in its own right nevertheless. As you look, consider that the stars shining behind it are more than a million times farther away — and that the Virgo Cluster galaxies are nearly a million times still farther behind the stars.