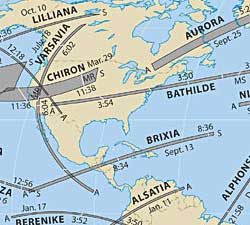 David Dunham’s maps on the following pages show most asteroid occultation paths predicted to cross well-populated parts of North America, Europe, eastern Australia, and New Zealand in 2003. Bright events are shown for other areas on this large world map (click on the image to see the complete chart). The path locations are uncertain generally by a few path widths.

Watching a star field and seeing one of the stars suddenly vanish, only to reappear several seconds later, is a startling sight that one never forgets. Occultations by dim asteroids are rarer than the lunar events described in the article "Lunar Occultation Highlights for 2003", since these interlopers have a much smaller angular size than the Moon and they move more slowly across the sky. It doesn’t matter if the asteroid is too faint to see — you just need to be able to see the star. Several of the stars occulted by asteroids this year are bright enough for easy viewing in binoculars.

Amateur astronomers at many separate locations using simple timing methods can garner fundamental new data about the size, shape, and atmosphere (if any) of the occulting body. That’s why the International Occultation Timing Association (IOTA) seeks these observations. It is true that large telescopes equipped with adaptive optics can reveal amazing asteroid shapes and duplicity, but enthusiastic amateurs can obtain much the same information by observing occultations. The key is coordination — it takes more than three or four “chords” to trace an irregular asteroid’s profile.

The maps and tables in this article describe many occultations taking place in 2003, with emphasis on those visible from populous areas of North America, Europe, Australia, and New Zealand. Only the best events can be covered here, but many more are accessible with most telescopes. I encourage you to visit the Web sites mentioned later in this article to learn of other events visible from your area. 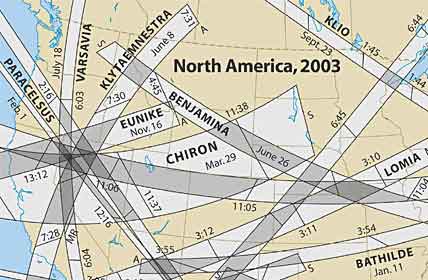 Here are most asteroid occultation paths predicted to cross North America in 2003 (click on the image to see the entire chart). As explained in the text, path locations are uncertain generally by a few path widths. Paths end in S where twilight is too strong for effective observation, and in A where the star’s altitude becomes too low. MR marks moonrise on some paths, while MS marks moonset. Along each path are slanted lines giving the approximate Universal Time when the event is expected.

Predictions of this sort have become more reliable in recent years, since most occulted stars’ positions were measured very accurately in the early 1990s by the European Space Agency’s Hipparcos satellite and were incorporated in the highly refined Tycho-2 Catalogue. For relatively small asteroids we cannot guarantee that you will see an occultation, but the chances are now much better. More often than not, an observer near the centerline will have an occultation, and good coverage is virtually assured if several observers are positioned across a predicted path. As is true for lunar grazing occultations, mobile observers have a distinct advantage.

Asteroids’ orbits continue to be improved, but the actual shadow paths on Earth’s surface can differ by a few hundred miles from the nominal paths shown here. Fortunately, IOTA’s Steve Preston in Washington and Jan Manek in the Czech Republic can refine a prediction a few weeks before an occultation, using mainly observations from the U.S. Naval Observatory’s Flagstaff Station and the Jet Propulsion Laboratory’s Table Mountain Observatory. Some updates are given on IOTA’s recorded phone message at 301-474-4945, but most are given in the asteroid section of IOTA’s Web site and at the regional sites given at the top of that page. We often issue a Sky & Telescope AstroAlert as well. For many events we try to coordinate coverage, and for this purpose we need the locations of active observers.

The monthly Calendar Notes section of Sky & Telescope is a good place to check for finder charts of the best occultations in a given month. Those for most other events can be found on IOTA’s Web site. Use a finderscope of 50-millimeter aperture or more. On your main telescope, a low-power, wide-angle eyepiece helps. I can’t overemphasize the need to allow a generous amount of time, at least a half hour if a bright star is not nearby, for locating the target star.

Edwin Goffin at Agfa-Gevaert, Belgium, provided the data used to compute the paths and other information for most events in this article. But several additional bright events involving mainly smaller asteroids were found by Jerome Berthier and D. Hestroffer in Paris, and by Scott Donnell in Colorado, with data for them provided by Steve Preston.

A complete list of the best worldwide occultations by minor planets, including more details about each occulting body and occultation, can be found in the March 2003 issue of Sky & Telescope, beginning on page 101. 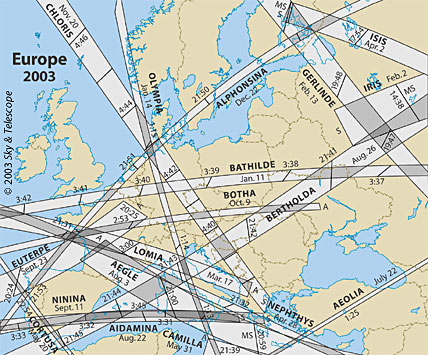 This map shows most asteroid occultation paths predicted to cross Europe in 2003. As explained in the text, path locations are uncertain generally by a few path widths. Paths end in S where twilight is too strong for effective observation, and in A where the star’s altitude becomes too low. MR marks moonrise on some paths, while MS marks moonset. Along each path are slanted lines giving the approximate Universal Time when the event is expected. Click on the map to see the complete chart.

Following are comments on selected events from January to June, 2003. The date of the event is followed by the name of the occulting body. The possible area of visibility is listed at the end of each description.

February 1st, Paracelsus. The star has a 10.0-magnitude companion 42.6" away in p.a. 74°, that will probably be occulted in eastern Australia about 2.3 hours earlier, at about 10:12 Universal Time. North America, Asia (world)

February 2nd, Iris. The 7.8-magnitude B component of 51 Piscium will be 0.26" away in p.a. 279° (toward celestial west). The drop in combined light for this event is 2.3 magnitudes because the B component cannot be resolved and will remain visible during the occultation. Russia (world)

March 14th, Mathilde. Half of Mathilde was imaged by the NEAR Shoemaker spacecraft in 1997, so observations of this occultation could measure part of the unobserved outline to improve the volume and density measurement of this carbonaceous asteroid. The 8.6-magnitude B component of SAO 96914, 2.4" away from A in p.a. 97°, will be occulted in a path that is entirely in daylight west of the path for A. east Asia (world)

June 8th, Klytaemnestra. The star’s 14.5-magnitude companion, 2.6" away in p.a. 160°, will be occulted about 0.6 minute earlier along a path about five path widths north of that for the primary. But this companion’s occultation will be hard to see since the asteroid will be one magnitude brighter. North America 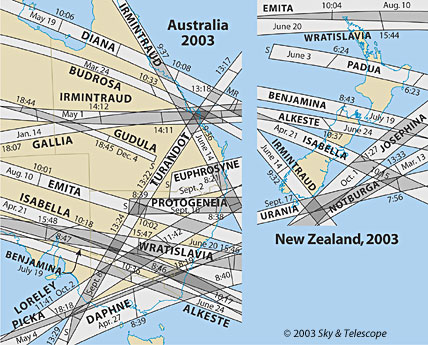 This map shows most asteroid occultation paths predicted to cross eastern Australia and New Zealand in 2003. As explained in the text, path locations are uncertain generally by a few path widths. Paths end in S where twilight is too strong for effective observation, and in A where the star’s altitude becomes too low. MR marks moonrise on some paths, while MS marks moonset. Along each path are slanted lines giving the approximate Universal Time when the event is expected. Click on the map to see the complete chart.

The following are comments on selected events from July to December, 2003. The date of the event is followed by the name of the occulting body. The possible area of visibility is listed at the end of each description.

July 22nd, Aeolia. Kappa1 (k1) Tauri may be a close double, based on Harold Povenmire’s observation of a lunar occultation in 1974, but that was not confirmed by Hipparcos. Europe, Turkey (world)

September 5th, Steina. The Fifth Catalog of Orbits of Visual Binary Stars (U.S. Naval Observatory, 2001) lists 87 Piscium as an astrometric binary, but that entry may be erroneous; other catalogs do not show the star to be double. South America (world)

September 25th, Chi c Geminorum. The star has an angular diameter of 0.002", so it will spend 0.2 second fading and a similar time returning to view (where the event is central). North America (world)

November 5th, Feronia. SAO 117986's 11.9-magnitude companion, 2.4" away in p.a. 130°, will be occulted along a path about 13 path widths farther to the north, three minutes later. But the companion’s occultation will be hard to see, since it will probably not be resolved from the primary (which is almost four magnitudes brighter). North America

June 15th. A central flash, produced by starlight refracted through Mars’s atmosphere, might be seen from central Chile, northern Argentina, and Uruguay.

November 1st. Large dimmings of the star might be observed when it passes behind the rings of Uranus.

November 22nd, SAO 146571. A central flash might be seen from western and northern Australia.

Professional astronomers are also trying to predict and observe occultations of faint stars by Pluto, Neptune’s interesting moon Triton, Centaur objects like Chiron, and bodies in the far-flung Kuiper Belt. But the brightest stars involved during 2003, aside from that on March 29th involving Chiron, are 14th magnitude or fainter and beyond the reach of most amateurs’ telescopes.

Finder charts, detailed maps, observing news, and information on events worldwide are carried in the Occultation Newsletter, published by IOTA. For local data about all events possibly visible from your location, send your longitude and latitude, $1.00, and a large, self-addressed envelope to Jim Hart at 2616 Monte Cresta, Belmont, CA 94002-1214, or obtain the information free by e-mail request to [email protected].

Please send observation reports to Jan Manek at Stefanik Observatory, Petrin 205, 11846 Praha 1, Czech Republic, or by e-mail to [email protected]. A report form is available from IOTA's Web site or from Manek by e-mail. Remember that if you are near a path and watch the target star, yet see no event, your report is still important to us.