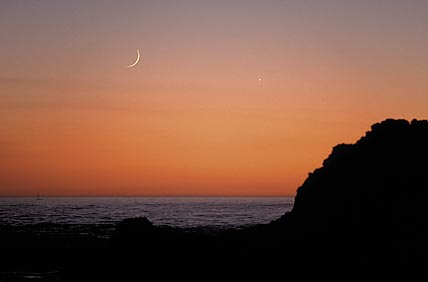 On October 26, 2003, after taking his camera to Pescadero State Beach in California, Youssef M. Ismail caught this 37-hour-old Moon with the planet Venus 3½° to its right. The Moon had been sighted a half day earlier in the Middle East, an event that marked the beginning of Ramadan, the Islamic month of fasting.

Few celestial sights are as arresting and beautiful as a slender crescent Moon in the western evening sky, the day after it passes the Sun each month. A good-luck token for some, a bad-weather omen for others, it is also a sight that regulates the lunar calendar of the Muslim world.

For amateur astronomers and photographers alike, each young Moon makes an inviting target. The sunlit part encircles the Moon’s night side, which is not fully dark but is bathed in sunlight reflected back toward the Moon from Earth. This earthshine theoretically gets brighter the closer the Moon is to new, except that it can easily be washed out by twilight. On rare occasions it has even been seen during a total solar eclipse.

When it comes to sighting the youngest possible crescent in the evening sky — or, for that matter, the thinnest waning crescent in the predawn sky — we are no longer talking about a bewitching sight that you might notice casually. Spotting such a Moon is no accident — you have to plan for it very carefully and pay close attention to the astronomical conditions under which a record sighting is even possible.

The instant of new Moon occurs when our satellite’s celestial longitude (along the ecliptic) matches that of the Sun. Some 16 to 24 hours later, if the Sun has just set at your location, you might catch sight of a very slender crescent low in the western sky.

The record for the youngest Moon ever seen with optical aid, 11h 40m past new, goes to Mohsen G. Mirsaeed of Tehran who saw it on September 7, 2002. The youngest crescent ever seen by the naked eye, 15h 32m, is still that observed in May 1990 by Sky & Telescope contributing editor Stephen James O’Meara.

Any given year there are only a handful of specific dates and locations on Earth where the thinnest crescent sightings are possible. To see why, we need to explore the interplay of astronomical factors affecting visibility.

On the morning of August 13, 1931, French astronomer André Danjon observed a Moon only 16h 12m before new with a 3-inch refractor. Much to his surprise, the thin crescent appeared to extend only 75° to 80° along the Moon’s limb — considerably less than the expected 180° (halfway around). When Danjon compiled many other observations of this “deficiency” effect, he came to a remarkable conclusion: Whenever the Moon is 7° or less from the Sun, there can be no visible crescent at all!

Danjon believed that mountains and other roughness along the lunar limb must be blocking some of the sunlit surface that would otherwise be seen, thereby clipping off the ends of the crescent. Bradley E. Schaefer (Louisiana State University, Baton Rouge) has modeled the crescent's perceived length by including physiological factors and atmospheric extinction. In any event, Danjon’s 7° limit should actually be revised to 7.5°, according to a 1998 study by Louay J. Fatoohi and his colleagues at the University of Durham.

What’s interesting is that a hard-and-fast Danjon limit of 7.5° still gives would-be record breakers a certain amount of leeway. Four other astronomical factors play a significant role in whether a crescent of minimum age can be seen:

Care to make your own crescent-hunting attempt? Whether you are after a record or simply want to enjoy one of nature’s most enchanting spectacles, visit the South African Astronomical Observatory website. They maintain a large database with links to related sites and free software for exploring visibility circumstances.