Everyone who gets into stargazing makes a kind of mental checklist of the things they want to see: the Moon and planets, assorted star clusters and nebulas, and maybe a galaxy or two. But do you realize that on any clear evening you can spot a type of heavenly object with your unaided eyes that generations of past astronomers never got to see — even with the world’s most powerful telescopes? 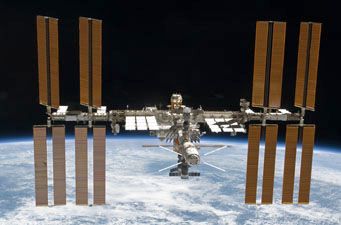 The International Space Station is the largest spacecraft ever built. Here's how it looked during the final flight of Space Shuttle Discovery in March 2011. Click here for a larger version.

Artificial satellites are a Space Age phenomenon. The very first, Sputnik 1, caused a worldwide sensation when launched by the Soviet Union in October 1957. Now they’re whizzing overhead by the thousands, a routine part of everyday life. Today the U.S. Department of Defense tracks more than 9,400 separate objects circling Earth — everything from the International Space Station, measuring hundreds of feet across, to bits of shattered rocket only a few inches long.

A satellite shines by reflected sunlight, creating a pinpoint of light in the night sky that looks like a moving star. You can see satellites after sunset or before sunrise when it’s dark on the ground but the Sun’s still shining 250 to 500 miles up, where they typically travel in space. The higher the altitude, the closer to midnight you can spot them. In fact, during midsummer, especially if you live at a latitude of 40° or higher, you can watch satellites cruise overhead all night long.

The best thing about taking a “sat-seeing” tour is that it doesn’t require any kind of equipment. All you need are your eyes and a clear, moonless evening. Go outside as soon as it’s dark enough to see stars, and settle into something that allows you to recline comfortably. The direction you face isn’t crucial, but make sure you’re positioned to take in a wide expanse of sky. From a typical suburban location, in a sky that’s not pitch black but still shows plenty of stars, you can expect to spot 10 to 20 satellites in the hour after twilight. (All told, a few hundred satellites are bright enough to see by eye, but on any given night most either aren’t traveling above your horizon or aren’t passing overhead at night when they’ll catch the Sun.)

To stay aloft, satellites must race around at roughly 5 miles per second, and most circle Earth in just 1½ to 2 hours. But because they’re so high up they don’t seem to “zip” at all — instead, their motion looks stately and purposeful. Sweep your eyes slowly around the sky, lingering now and then in a particular area, and it won’t be long before you spot a starry impostor creeping among the real stars. You’ll realize right away that it’s not a meteor, because meteors streak by in a flash and then are gone. And you’ll know it’s not a high-flying jet if you don’t see any blinking lights or hear any sound. 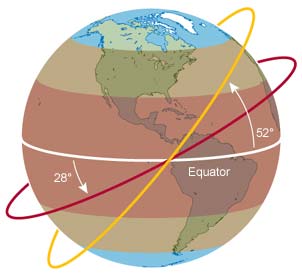 Most NASA satellites orbit over the tropics, but the International Space Station's orbit is inclined 52°, making it observable from most populated areas.

Most satellites travel generally west to east, in the same direction that they were launched into space. Evening satellites look brightest after passing the halfway point in their arc, as they’re moving into the eastern sky. That’s when, from our perspective on the ground, a spacecraft’s body is most fully sunlit. Some weather and surveillance spacecraft move north to south (or south to north) among the stars; these have special-purpose orbits that take them over the poles. The lowest and brightest satellites take 3 to 5 minutes to arc their way from one horizon to the other, whereas higher, fainter ones can linger for 10 minutes or more. Only a few actually pass anywhere near directly overhead — it’s more typical to see one, say, rise in the southwest, reach a point about halfway up toward the south, and then slide off toward the southeast.

As night deepens you might catch a spacecraft slipping into Earth’s shadow just as it’s passing overhead. When that happens, watch for its gleam to slowly redden and fade out. Or, in the darkness before sunrise, a satellite can suddenly pop into view as the first rays of sunlight illuminate its shiny surfaces. any spacecraft (especially “dead” ones) appear to flash as they move because they are tumbling and sunlight is glinting off the spinning body’s reflective surfaces. By timing the interval between flashes, you’ll get a good estimate of the tumbling rate; depending on its overall shape, the satellite might be flashing once or twice per rotation. 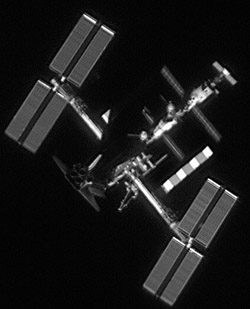 In June 2007, astronomers used the Clay Center Observatory's 25-inch telescope to capture this view of the International Space Station and the visiting Space Shuttle Atlantis (left of center) as they flew over Boston.

The easiest satellite to spot, by far, is the International Space Station (ISS). Its construction began in November 1998, with the launch of the Russian-built module called Zarya (meaning “Dawn”). Since then many additional components have been added, and it now ranks as the largest spacecraft ever built. The station’s normal altitude is about 225 miles (360 km), but friction from the incredibly tenuous atmosphere that high up drags a little lower every day. Without rocket visits to boost it back up again, the Space Station would eventually crash to Earth.

The ISS occupies an orbit that's inclined, or tipped, about 52° with respect to Earth's equator. In other words, it flies over everything between latitudes 52° north and south, making it visible to most of our world's inhabitants. And because it's so big, the Space Station can appear very bright, outshining all the stars and even rivaling brilliant Jupiter or Venus.

But don’t count on spotting the Space Station the very next time you go looking. To catch sight of it, the ISS must be in the right place (somewhere above your horizon) at the right time (the hours just after sunset or before sunrise). Moreover, because of the perturbing effects of Earth’s gravity, most satellites go through cyclical “spells of visibility,” during which they’ll be observable in the evening sky for a time, then before sunrise, and then not at all. The ISS goes through its cycle in about two months.

In the 92 minutes it takes the ISS to complete an orbit, Earth turns only 23° of longitude. So you may be able to see two successive ISS passes in a single evening.

You don’t have to rely on guesswork or intuition to catch sight of the ISS as it passes over you. To determine exactly where and when to see it or any other specific satellite, you can download a computer program that calculates the particulars using two-line elements (TLEs). These are strings of numbers that define the satellite’s motion mathematically, using precise values for its orbital inclination, the number of orbits completed in a 24-hour period, and so forth. Satellites at relatively low altitudes are susceptible to atmospheric drag and undergo slight changes in motion caused by Earth’s gravity, and for these you’ll need to obtain updated sets of TLEs every few weeks to keep the predictions accurate.

I’m sure you’re thinking, “There must be an easier way!” And there is, at least for the International Space Station. You can customized predictions for your location right here on SkyandTelescope.com. Just use our satellite tracker. NASA also provides ISS viewing predictions for hundreds of cities worldwide.

To spot the spacecraft, go outside a minute or two before the indicated time and look in the compass direction where the ISS is predicted to appear. Pick a spot without trees or tall buildings to block your view in the appropriate direction, especially if the maximum elevation is less than 30°. Don’t fixate on a particular point in the sky, as often the ISS is too faint to pick up at the very beginning of its pass.

I like to challenge kids or friends at outdoor parties to see who’ll be the first to catch sight of the ISS as it rises up into the sky. Or try estimating its brightness by making comparisons to other bright stars or planets. You can try following it with binoculars, but they’re not powerful enough to detect its shape. And while a telescope can resolve crude details, you’ll find that it’s very difficult to follow the spacecraft smoothly.

The most popular website for tracking satellites is heavens-above.com, which offers easily customized sighting predictions for the ISS and other bright spacecraft. You can display or print a star chart showing the satellite’s track across the sky, look up sightings for past dates (very handy if you saw a bright satellite last night and want to know what it was), and create predictions for the fascinating phenomenon of “Iridium flares.” 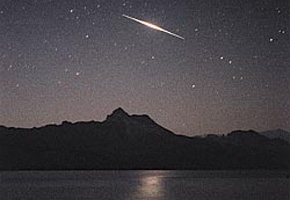 On the morning of August 4, 2002, Matthew Sabatini caught this magnitude #&150;6 Iridium flare over the Colorado River just south of Hoover Dam. His 34-second exposure on Fujicolor ISO 1600 color-negative film was taken through a 50-mm lens at f/1.8.

Sparks in the Dark

Of the thousands of objects now orbiting Earth, the nearly 100 spacecraft belonging to the Iridium series really stand apart — at least from a skywatcher’s point of view. These communications platforms skim the upper-most, most rarefied region of the atmosphere around 500 miles up. They travel in six steeply inclined orbital planes that nearly pass over the North and South Poles, making them observable from anywhere on the planet.

What makes the Iridium satellites special is that each has three extremely shiny, door-size antenna arrays. These act like giant mirrors, reflecting sunlight toward the ground and causing brief but brilliant flares that can momentarily outshine any star or planet. (In astronomical parlance, the planet Venus can be as bright as magnitude –4½ but an Iridium flare can be –8, which is 25 times brighter.)

For pure spectacle, nothing beats a bright Iridium flare, and you’ll find predictions for them on the Heavens-Above website. They’re easy to photograph, too. Virtually any camera, whether film or digital, can capture a bright flare as long as it can take a time exposure at least 15 or 20 seconds long. Use film (or an ISO setting) of 100 or 200, set the lens opening to f/2.8 or faster, and mount the camera on a sturdy tripod.

The only challenge is making sure your camera is pointing at the right spot in the sky. Iridium predictions are given in angles of azimuth and altitude. The azimuth is measured around the horizon starting at true north (the direction of Polaris), increasing along the horizon toward east(90°), south (180°), west (270°), and back to north (0° or 360°). Altitude runs from 0° at the horizon to 90° directly overhead. Your fist, held at the end of an outstretched arm, is about 10° across — a useful tool for estimating angles. Iridium flares leave streaks that are usually less than 10° long, so you'll have plenty of room for small pointing errors if you're using a normal or wide-angle camera lens.

Want to track down the Hubble Space Telescope or a tumbling rocket body in space? Computer software to create customized viewing predictions is available from T. S. Kelso (www.celestrak.com/software) and the Visual Satellite Observer’s site). You can download two-line elements for thousands of different satellites at Kelso’s website, as well as from www.space-track.org.