Each night giant telescopes around the world scan the sky for new solar-system objects, so it would be easy to conclude that the era of comet discoveries by amateur astronomers is over. But that's not the case! It's still possible for amateurs to bag interplanetary visitors that professional automated sky surveys miss. In fact, backyard observers continue to play a valuable role in finding and tracking new comets. 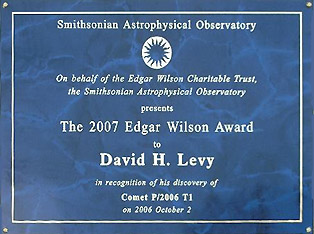 Sky & Telescope contributing editor David Levy shared in the 2007 Edgar Wilson Award for his discovery of a periodic comet the previous year.

Now amateur comet discoverers receive more than just naming rights and hearty congratulations for their efforts — because they can qualify for the Edgar Wilson Award. Established in 1998 in memory of American businessman Edgar Wilson, the award is given to amateurs (or to professional astronomers acting in an amateur capacity) who, in a given year, find one or more new comets using amateur, privately owned equipment.

Wilson, who lived in Lexington, Kentucky, had a keen interest in astronomy before his death in 1976. Under the terms of his estate's bequest, the Smithsonian Astrophysical Observatory administers the award through the IAU's Central Bureau for Astronomical Telegrams. Awardees receive individual plaques and share a cash prize. Recently the latter has totaled about $20,000, which is usually divided among two to six amateur individuals or groups. Not since the 1880s have backyard observers stood to gain such sizable financial bounty for their finds.

The comet discoveries can be visual, photographic, or electronic; those made using spacecraft data, such as from SOHO, don't qualify. In years when no such discoveries are made, the SAO will present the award to amateurs who have made major contributions to promoting cometary studies.

Read more about the Edgar Wilson Award and view a list of past winners.