The path of Antares behind the Moon as seen from various cities. Celestial north is up; celestial east (lunar west) is left.

If you’re one of the countless skywatchers who got clouded out (or rained or snowed out) for the Moon’s predawn occultation of Jupiter across most of North America last December 7th, don't give up yet. A shot at another spectacular early-morning occultation is coming up, weather permitting.

This time the Moon will cross not a big planet but big Antares, one of the two brightest red supergiant stars in the sky (the other being Betelgeuse, which is too far from the ecliptic for the Moon ever to occult it). Mark your celestial calendar for March 2, 2005, with a reminder to set your alarm clock for early Thursday morning, March 3rd. For nearly all of the North American continent, the last-quarter Moon will be hanging in plain view in the southeast or south when it covers and uncovers Antares.

As usual when the Moon is waning, the star will disappear behind the Moon’s bright limb, where you’ll need a telescope to follow it as it creeps up to the glary edge of the brilliant lunar terrain. Antares will hang right on the edge for a few seconds — a fire on the Moon — then vanish instantly, or nearly so. 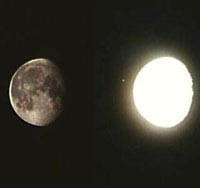 When the waning gibbous Moon occulted 1st-magnitude Aldebaran on October 19, 1997, Sky & Telescope's Rick Fienberg made pairs of short-exposure images that show the Moon well (but don't show the star) and long-exposure images that show the star (but overexpose the Moon). He then combined them digitally to make a time-lapse movie (90K GIF) showing the Moon covering and uncovering Aldebaran over about two hours (click on the image to see the movie). Fienberg used a 500-mm f/5.6 telephoto lens piggybacked on an equatorially mounted telescope with a motorized drive.

More spectacular will be Antares’ reappearance roughly an hour later out from behind the Moon’s dimly earthlit dark edge. This event should be visible to the naked eye in a dark sky — if you’re staring at the Moon at exactly the right moment. Of course, binoculars or a telescope will give a far better view. (For Easterners the reappearance happens after sunup, but even so you’ll have no trouble finding the Moon with the naked eye and seeing Antares snap into view in the blue sky with a telescope.)

Sky & Telescope has prepared custom predictions for 340 cities in the United States, Canada, and Mexico. For more about observing the occultation, including how to make scientifically useful observations, see the March issue of Sky & Telescope, page 67.