During the spring of 2003 Vesta is an easy target for binoculars, being noticeably brighter than the dimmest stars on this chart. The asteroid's passage close to numerous galaxies adds to the excitement of viewing or imaging it with a backyard telescope. Only the brightest galaxies are plotted here; see page 3 for previews of Vesta’s many encounters with fainter ones.

During the first half of 2003, observers with binoculars and small telescopes will be able to watch the asteroid 4 Vesta loop gracefully through the constellation Virgo, making its most favorable return in several years. In May, June, and July, the asteroid is well-placed (highest in the sky) for viewing during early-evening hours. The constellation Virgo is famous for its galaxies, and Vesta’s journey takes it past many such deep-sky denizens near the heart of the Virgo Galaxy Cluster. Vesta peaked at magnitude 5.9 on March 27th, then faded to 6.4 by the end of April. It continues a gradual decline to 7.0 on June 1st, 7.4 on July 1st, and 7.6 at the beginning of August.

For some observers the mention of Vesta brings back memories of moonlight when it last reached opposition in our night skies, in July 2000. That year the asteroid became even brighter, peaking at magnitude 5.4, but on a night that coincided very nearly with the full Moon — and a total lunar eclipse! This year the Moon is well out of the way for observers wishing to catch sight of Vesta.

In the Footsteps of Vesta's Discovery 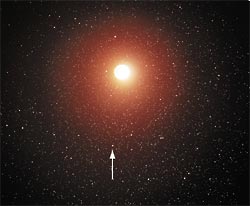 In July 2000 Vesta was nearly as bright as it can ever get. But strong moonlight thwarted most skywatchers' attempts at spotting it — except for about two hours on the night of July 16th. Akira Fujii's photograph shows Vesta just 2° south of the totally eclipsed (but still bright) Moon.

Among the tens of thousands of numbered asteroids in our solar system, Vesta is the only one that ever becomes so easy to spot. It actually brightens past magnitude 6.0 every few years. Such was the night of March 29, 1807, when German physician Heinrich Wilhelm Olbers (1758–1840) discovered the "unknown star" that would soon be hailed as the fourth known asteroid.

Olbers is best known today for the paradox he investigated: why the sky appears so dark at night
(S&T: December 2001, page 44). But he was no stranger to discoveries. He had earlier found 2 Pallas, the second known asteroid, in 1802. Three comets bear his name, and one of them returns every 70 years. He also devised an extremely efficient method for calculating a comet’s orbit that is still in use today (for an initial solution, when the orbit can be assumed to be parabolic).

Virgo was a charmed part of the sky for Olbers. In 1796 he found his second comet south of Virgo’s brightest star, Spica. In 1802 he made the first recovery of 1 Ceres in Virgo (thanks to calculations by mathematician Carl F. Gauss), a year to the day after its discovery. A few months later he discovered Pallas in the northern part of Virgo. Five years and one day after that, he likewise spotted Vesta in Virgo, close to its current location. Vesta’s track among the stars this year is rather similar to the course it took 196 years ago.

This strip measures 3° vertically, about the same as a 20x field of view in a small amateur telescope. When planning to view or image Vesta passing by a galaxy, note that the tick marks give the asteroid's location at 0h Universal Time on each date. The chart shows stars as faint as magnitude 11 and galaxies as faint as magnitude 13.

Obviously, the position of Vesta along its elliptical orbit is a contributing factor to the variation in visibility. The closer Vesta is to the Sun in its 3.6-year circuit, the closer it is likely to be to Earth. In 2003 Vesta doesn’t reach perihelion, the point nearest the Sun, until October 28th, seven months after opposition. Then it will be just 2.15 astronomical units (Earth-Sun distances) from the Sun, compared to 2.57 a.u. at aphelion, the far point.

Size is also a factor in Vesta’s prominence, though not as much as you might think. According to the 2003 Astronomical Almanac, Vesta is believed to be 530 kilometers in diameter (though not a perfect sphere), edging out Pallas’s width of 524 km. These values stand well in the shadow of Ceres’ 933 km. In the main belt of asteroids between Mars and Jupiter, 10 Hygiea ranks fourth place in size at 429 km. But no longer is it correct to say that these are the four largest asteroids. Several newly discovered objects in the far-flung Kuiper Belt — 20000 Varuna, 28978 Ixion, and 50000 Quaoar — may outrank even Ceres. Needless to say, those in the main belt are much easier to hunt down than those lying far beyond Neptune.

Given that Vesta is neither the largest nor the closest of the asteroids, you might wonder what distinctive characteristic makes it so readily seen. The answer lies in its albedo, or surface reflectivity. Asteroids like Ceres reflect around 11 percent of the sunlight reaching their surfaces, and others like 18 Melpomene have albedos as high as 22 percent. But Vesta is geologically quite different and reflects a substantial 42 percent, much like a pink grapefruit! That’s why it can become so bright in our night sky.