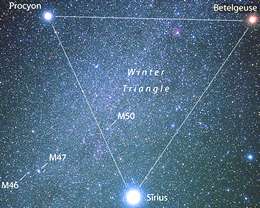 For Northern Hemisphere observers, the Winter Triangle serves to identify an area of the Milky Way rich in deep-sky objects.

Much of the Milky Way is spangled with bright naked-eye stars, but not all of it. Southward from the feet of Gemini through Monoceros and northern Puppis, the Milky Way displays no star as bright as 3rd magnitude. Distracting the eye to the west of this region is Sirius in Canis Major. To the east is Procyon in Canis Minor. But don't be fooled; the "empty" sky between them is rich territory for deep-sky hunters with small scopes.

M50. Here's a cluster you probably don't know about, but it's easy to locate. Draw a line from Sirius in Canis Major through the Big Dog's nose, Theta (θ) Canis Majoris, and continue onward for nearly the same distance (about 4°). M50 is a faint smudge in a good finderscope, and a 60-mm telescope shows a group of about 20 stars. Through a 90-mm, the cluster's ¼° core reminds me of a housefly facing northeast. One wing goes off toward the south and the other to the west. Stars on the northeast side of the cluster form the head and mandibles. M50's brightest star lies in the southern wing; it looks reddish orange through telescopes larger than 4 inches.

Nearly 13° to the east-northeast of Sirius lies the open cluster M47. Visible in a good finder under suburban skies, M47 is notable for the two Struve double stars.

M47. Draw a line from Mirzam, Beta (β) Canis Majoris, through Sirius and continue east for a little more than twice that distance, and you'll land just north of M47. Dark skies reveal a very faint fuzzy patch to the unaided eye. A good finder will pick it up under suburban skies. M47 is a beautiful cluster through any telescope. In a 70-mm, 25 bright to faint stars can be seen in a very loose, irregular group about ½° across. In a 4-inch, M47 shows about 50 mixed bright and faint stars weakly concentrated toward the center.

An arc of three fairly bright stars lies just north of center. The southernmost of the three is the double star Struve 1121 (S1121), a nearly matched pair of 8th-magnitude stars separated by 7.4". They can be cleanly split at 75x. M47's brightest star, near the western edge, is also double; Struve 1120 has 5.7- and 9.6-magnitude suns separated by 19". The brightest star north of S1120 is orange.

A Cluster of Clusters 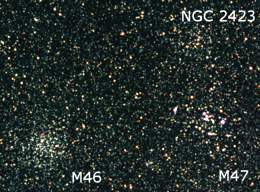 Together M47, M46, and NGC 2423 in northern Puppis make up one of the prettiest fields in the sky for small rich-field scopes. At 25x or less all three will fit in the same field of view. Chris Cook digitally enhanced and composited two 25-minute exposures made with an 85-mm f/5.6 refractor to create this image.

M46. This cluster lies just 1.3° east-southeast of M47 and offers a study in contrasts with it. M46 appears much smoother and finer grained than its coarse, bright-starred neighbor. Look for a glowing swarm of hundreds of faint stars, many just on the edge of visibility through a 70-mm scope. In a 4-inch M46 appears round and extremely rich, with many faint to very faint stars densely packed over an unresolved background.

NGC 2423. There's a third cluster here too. Just 40' north of M47 a 60-mm telescope will pick out a small, faint patch of light. Much subtler than its splashy neighbors, NGC 2423 looks about half their size. Through a 4-inch it shows about 20 dim stars against an unresolved haze.

Together M47, M46, and NGC 2423 make up one of the prettiest fields in the sky for small rich-field scopes. At 25x or less all three will fit in the same field of view. Because they appear strikingly different, the total effect is breathtaking. It is even more fascinating if we keep in mind the trio's relative placement in space and time. M47 is the closest and youngest at about 1,400 light-years and age 200 million years, while NGC 2423 is approximately twice as old and distant. M46 is about the same age as M47 but more than three times farther away, at around 5,000 light-years.

M48. This cluster is 12° farther northeast. It makes a not-quite-equilateral triangle with the 4th-magnitude stars C Hydrae (a wide triple in binoculars or a finderscope) and Zeta (ζ) Monocerotis. A 60-mm shows a big, poorly defined group 40' wide made of about 30 stars 8th magnitude and fainter. The brighter stars run north-south across the center. A 4-inch scope shows 50 stars, many arranged in pairs and chains.

How to Find These Clusters

Click on the image to see an expanded view of the chart.

The black circles (visible in the expanded view of the chart at left) show the size of a typical finderscope's field of view (5°) and a typical telescope's view with a low-power eyepiece (1°). This indicates how much of the map you'll see in your eyepiece. Next, figure out directions. North is up and east is left on the map. To find which way is north in your view, nudge your telescope slightly toward Polaris; new sky enters the view from the north edge. Turn the map around to match. (If you're using a right-angle star diagonal at the eyepiece, it probably gives a mirror image. Take out the diagonal to see a correct image that will match the map.)