The two brightest asteroids are close to each other in late 2012 and early 2013. Moreover, they're traversing one of the most interesting areas in the night sky.

Vesta and Ceres are normally far from each other in the sky. But every 17 years swift Vesta, with an orbital period of 3.63 years, catches up to slower Ceres in its 4.60-year orbit. The asteroids were extraordinarily close, just 3° or 4° apart, in October and November 1996, but they were then poorly placed for northern observers, in Sagittarius and southern Ophiuchus.

They're close to each other again in late 2012 and early 2013 — though not as close as in 1996 and never much closer than 6°. But, in compensation, they're ideally placed for northern observers, near the northernmost section of the ecliptic, in Taurus and Gemini.

Moreover, this is one of the finest parts of the sky for binoculars and small telescopes, including three of the finest star clusters: the Pleiades, the Hyades, and Messier 35. To add to the excitement, Jupiter is in this sector of the sky throughout the entire period, and Venus is there in July.

Sky & Telescope usually only creates asteroid charts for the time around opposition, which happens in December 2012 for both asteroids. But this apparition is so remarkable that we're plotting the whole thing. Although Ceres and Vesta are brightest around opposition, they're still readily visible in small telescopes even when they're faintest.

Click here for a full-page printable finder chart for Ceres and Vesta July-September 2012. 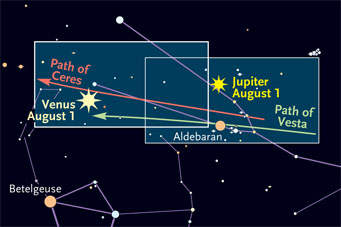 Click above to download a full-page printable finder chart for Ceres and Vesta from July through September 2012.

The action starts in July and early August, when Taurus first appears in the morning sky just before the onset of twilight. The time is ludicrously inconvenient (around 4:30 a.m.), the action takes place very low in the east, and Ceres and Vesta are still faint (magnitude 9.1 and 8.4, respectively). But the events are spectacular, as first Venus, then Ceres, and finally Vesta cross the Hyades back to back.

In August and September, Vesta passes close to the fine star cluster NGC 1647 and even closer to the remarkable cluster pair NGC 1807 and 1817. And Ceres is 2° from Messier 1, the Crab Nebula, in early September.

Click here for a full-page printable finder chart for Ceres and Vesta October-November 2012.

The asteroids begin their retrograde loops in October or early November, by which point they have brightened greatly. Vesta retrogrades sooner and faster than Ceres, so the two asteroids begin to pull apart, reaching their maximum separation of 13° in late December.

Ceres passes less than 1° south or southwest of M35 from November 18-26. By those dates both asteroids are reasonably high in the eastern sky by 10 p.m.

Click here for a full-page printable finder chart for Ceres and Vesta December 2012 through March 2013. 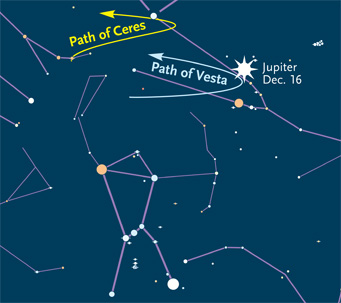 Vesta reaches opposition to the Sun on December 9th and Ceres on December 18th. Those are the dates when they rise around sunset, set around sunrise, and are highest around midnight. They're also at their brightest then (Vesta magnitude 6.4 and Ceres 6.7) and conceivably visible to the unaided eye in a pristine sky.

Vesta passes about 1° north of the remarkable open-cluster pair NGC 1807 and 1817 in the first week of December and about the same distance south of the big, bright cluster NGC 1647 in late December and early January. In late February Vesta dips brifely back into the easternrmost fringe of the Hyades.

Vesta passes through M35's companion NGC 2518 and clips M35's southern margin at the very end of April 2013. The asteroids disappear into the sunset glow in mid-May 2013.

Ceres and Vesta will be even closer to each other during their next apparition, which starts in October 2013, and they will be within 1° of each other in July 2014.

Thanks Tony, you're inspiring me to get up early and go asteroid hunting! Last week the astronomy picture of the day website featured a beautiful picture of Venus, Jupiter, Ceres, and Vesta with the Hyades and Pleiades: .

I appreciate the color finder charts, looking forward to seeing how they look with a red flashlight.