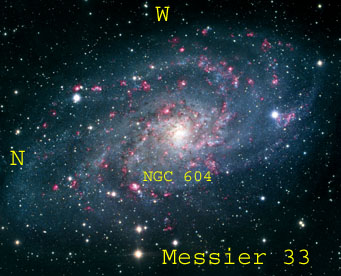 Messier 33, the Triangulum Galaxy, shows more detail through backyard telescopes than any other galaxies except the Magellanic Clouds and our own home, the Milky Way. But M33's treasures don't just jump out and grab your eye. To dig them out, you need dark skies, patience . . . and a good guide.

NGC 604, one of the largest and brightest known emission nebulae in the universe, is readily visible in backyard telescopes, and is fairly well-known in the amateur community. But did you know that the New General Catalogue lists three other nebulae within M33? The Index Catalog (IC) lists ten more concentrations, and hundreds have been cataloged.

In 2002 and 2003, well-known Canadian stargazer Alan Whitman identified seven distinct nebulae and star clouds within M33 using his 8-inch scope, and more than 30 using his 16-incher. He wrote up his observations, complete with an illustrated guide, for the December 2004 issue of Sky & Telescope. Click here to download a 300-Kb PDF of the article.