NASA's Mars Exploration Rovers, Opportunity and Spirit, have been hunkered down for weeks while they wait out the global dust storm that erupted last month. I've been following the progress personally whenever conditions have allowed from my observatory in southern New Hampshire. 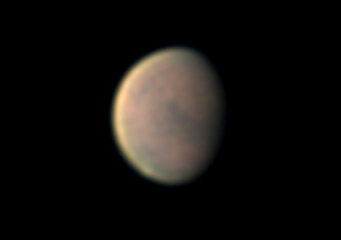 The Mars Exploration Rover Opportunity is located near the top left in this image; just to the right (east) lies a dense cloud of dust that obscures the planet's surface.

I captured the image at right on Thursday morning using a 12.5-inch Newtonian reflector. It shows a thick cloud of dust continues to blanket major parts of the planet, blocking out most familiar surface features. Meanwhile the Mars Reconnaissance Orbiter has been monitoring the weather above the rovers' locations from a much closer vantage point.

Unfortunately both near and far imagery suggest that the storms display no signs of abating. The only good news is that despite power levels remaining dangerously low for both rovers, NASA hasn't lost contact with either of them.

Although it's only about 7-arcseconds at the moment, amateurs are encouraged to observe and photograph Mars whenever possible — and send us your images. I know I find it exiting to follow Mars's weather changes with my own equipment. If you want to do the same, the Red Planet is well placed in the east shortly before dawn.

Do not know what I am looking at but it is big and rises from the East horizon a few hours before dawn. It remains in the sky rising higher and becoming smaller during daylight. It is the only star in the sky in daylight. Is it Mars? It is quite big and luminous! There is also an orange yellow one smaller in the Eastern sky during the night. Please I am very curious about the big star I see with my eyes only! Never seen anything so big! Charlotte, Vermont, USA
Amateur watcher
Cheers