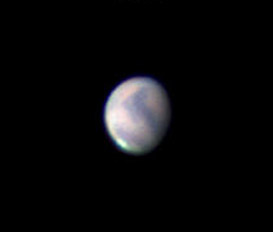 Larry Owens of Alpharetta, Georgia, recorded the developing dust storm shortly before 6 AM on the morning of June 27th. He used a 14-inch Schmidt-Cassegrain telescope and webcam. North is up.

On June 25th, amateur astronomer Jim Melka of St. Louis, Missouri, spotted a growing dust event over the Noachis region near the south polar cap of Mars — a historically active area. Throughout the following days, the event spread thousands of kilometers, and has now completely obscured Mare Serpentis, Hellas Basin, and parts of Mare Hadriacum and Iapygia Viridis.

Planetary observers Donald C. Parker and Jeffrey D. Beish remind us that the great dust storms of 1956 and 1971 started in roughly the same region and grew to envelop the entire globe within weeks. This event has the same potential; dust clouds are already covering parts of Eridania, which might or might not be due to a separate event. Mars is nearing perihelion, the closest point to the Sun in the planet's orbit. As the surface heats, convection currents form within the thin atmosphere. This increases surface wind speeds, and faster winds have the potential to lift large volumes of dust into the atmosphere — like what we are witnessing now.

NASA scientists detected the surface wind indirectly through the Mars Exploration Rover Spirit's solar panels. It was actually an increase in electricity that tipped them off. Dust slowly accumulates on the rover's solar power collectors resulting in less available energy over time. Increased wind speeds such as these tend to clean off the panels, which gives the rover more power.

Mars appears as a small 6-arcsecond disk at the moment, and it won't achieve its largest apparent diameter (roughly 16 arcseconds) until days after opposition on December 24th this year.

However, observers are encouraged to photograph the planet at every opportunity to track this storm. It could be a big one!