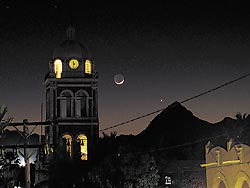 Mercury and the crescent Moon were captured above Misión de Nuestra Senora de Loreto on Mexico's Baja peninsula on the evening of February 6, 2000.

Mercury is a fascinating but widely neglected planet. With the most eccentric orbit of any planet except Pluto, Mercury lies two-thirds as far from the Sun at its closest as at its farthest; therefore, it varies greatly in brightness from one apparition to another.

With the help of binoculars, Mercury should be visible briefly as a rosy faint star. But the scene an be far more dramatic with a telescope. Appearing like a smaller version of the Moon, Mercury's phases are visible in a 3-inch (76-millimeter) scope at 100x if the seeing is good. Although it has a reputation as a difficult telescopic target, Mercury is the only planet besides Mars to show details on a solid surface.

Ideally, Mercury should be viewed in daylight, when it is higher above the horizon than it ever can be during twilight. This is much easier during a morning apparition than an evening apparition; you can locate Mercury in the twilight and then follow it well after the Sun rises. (Of course, you must take great care not to point the scope at the Sun by accident.) In daylight, use a red or an orange filter to make the blue sky darker and increase the contrast. Mercury has high surface brightness, so it responds well to high magnifications. Look for bright and dark surface markings, especially along the day-night terminator.

The Mercury section of the Association of Lunar and Planetary Observers has caught professional astronomers’ attention, especially Ann Sprague of the Lunar and Planetary Laboratory in Tucson, Arizona, who started the Mercury Watch Program so that we could share our results with her and her colleagues. Another planetary astronomer, Johan Warell of Uppsala University in Sweden, announced a Mercury Observing Campaign in which for the first time professionals and amateurs make simultaneous, coordinated observations. Some of the work and images from the ALPO Mercury section have been published in Exploring Mercury: The Iron Planet, by Sprague and Robert Strom (Springer, 2003).

A few dedicated observers deserve special mention. Mario Frassati of Crescentino, Italy, and Tim Wilson of Jefferson city, Missouri, produce some of the finest drawings of Mercury today. Tim Wilson of Jefferson City, Missouri, has provided wonderful telescopic sketches. Finally, I have taken some fine CCD images of Mercury in broad daylight, when it is highest in the sky.

There is good evidence that the bright albedo features often seen on the disk might be the ejecta blankets of bright ray craters. Our goal is to map the portion of Mercury not seen by the Mariner 10 spacecraft and compare that against the images that will be taken by the new Messenger spacecraft, launched August 3, 2004, and scheduled to make its first flyby in 2008. Messenger’s camera has much better resolution and contrast than Mariner 10’s, enabling it to make its own albedo map as it approaches the planet.

Now is the time to make original observations of areas not yet seen by modern spacecraft. All you need is willpower, plenty of advance planning, and, of course, clear weather. But if we learn the secrets of observing this tiny planet, we can be successful in this challenging and rewarding endeavor. I hope some of you will join the ALPO Mercury section of great amateur astronomers who have recorded faint but real details of Mercury.