Early risers get a triple treat this week and next: a ravishing dawn Moon, an excellent apparition of Mercury, and a hint of Halloween in the ghostly zodiacal light.

Synchronicity is a beautiful thing. Just as the Moon departs the morning sky this week, Mercury puts in a fine appearance and the zodiacal light comes out of hiding.

Once the Moon departs the scene, Mercury remains, brightening to negative magnitude in the first week of October while slowly slipping back toward the horizon. During this time, the zodiacal light puts in a great appearance, its best of the year for mid-northern latitude skywatchers. We have a two-week window of dark sky for sampling this tenuous delectable before the Moon returns in mid-October. A second window opens from October 28th through November 10th.

Composed of dust shed by comets and released by asteroid impacts, the zodiacal light gets its name from its location: it resides along the zodiac, a 16°-wide band of sky centered on the ecliptic, the great circle that defines the plane of the Solar System. The tapered cone of dust extends roughly to Jupiter's distance in a thin, flat disk, giving it a very approximate diameter of a billion miles. Outside of the solar wind, it's one of the largest entities in the Solar System.

The zodiacal light is broadest and brightest near the horizon because the fine dust is physically closer to the Sun and delivers a more intense reflection. As you follow up the length of the cone, your gaze takes you farther and farther from the Sun and the finger of light fades.

If you're fortunate enough to observe under truly pristine skies, the zodiacal light doesn't stop there but continues as the zodiacal band across the entire length of the ecliptic, brightening a bit at the anti-Sun position into a fist-wide patch called the gegenschein. I've seen extensions of the zodiacal cone but have never glimpsed the complete arc even from my darkest observing site. Someday!

The dust particles range in size from coal dust to very fine beach sand (0.01–0.3 mm) and reflect light via forward scattering, that is, the dust, which is illuminated from behind by sunlight, scatters the light forward in our direction. As long as the brilliant source is hidden, and the material is seen against a dark backdrop, forward scattering can take a wispy thing and make it look very substantial. If you live in a cold climate, you've probably seen your own breath as brilliant swirls of vapor when backlit by the low Sun — a close-to-home example of forward scattering.

In photos taken from the unique vantage point of the Cassini space probe, we see Saturn's tenuous, outer rings light up for the same reason. It doesn't take much material to create a spectacle, either. The separation between individual dust partlcles in the zodiacal light is about 5 miles (8 km) according to a study by Dutch astronomer H. C. van de Hulst. While tiny, the volume of space they occupy is huge. That and the effectiveness of forward scattering make these mere motes a most impressive sight from a dark sky.

You can begin watching for the zodiacal light ~2 hours before sunrise. Look for a weak, diffuse, thumb-shaped glow extending from the head of Leo, the Lion, in the north-northeastern horizon up through Cancer and into Gemini until it meets and blends into the tilted band of the winter Milky Way. This time of year it's easy to imagine it as the Lion's breath condensing into vapor on a chilly fall morning.

The light reaches greatest intensity, height, and spread in the opening minutes of dawn, when the eastern horizon begins to pale. Remember to cast your visual net wide. Where it roots at the eastern horizon, the zodiacal light is some 30° or three fists wide and at least six fists from top to bottom. It's also brighter than you might think, especially the lower half closer to the horizon (and the Sun). Some observers liken it to a light dome from a distant city.

While you don't need a completely foreground-free horizon to see the zodiacal light (owing to its size), you will need one if you want to see Mercury ascend from its base. Watch for the planet to clear the horizon just about the time the cone pales in the bluing sky. I saw them both this morning around 5:45 a.m. along with the amazing earth-lit Moon.

Fall mornings are best for zodiacal light viewing in the northern hemisphere because the angle the ecliptic makes to the horizon tilts upward and to the north, ensuring that the "false dawn" stands high and clear of the horizon haze. The favorable tilt repeats itself on spring evenings in the western sky; other times of year, the ecliptic is more nearly parallel to the horizon and the dusty blush is swamped by atmospheric absorption at low altitude.

A lingering crescent, a hide-and-seek planet, and a pyramid of light constructed of comet and asteroid castoffs. Such sights of arresting beauty await those who rise with the dawn.

It figures -- we had rainy weather here in Southern New Jersey for this morning's (Sept 29) close appulse of Mercury with the slender crescent moon. However, I have already seen Mercury a couple of times for this elongation, on the mornings of Sept 22 and 25. On both occasions, it was easy to see with unaided eyes, quite a contrast with the previous eastern (evening) elongation for those of us at mid-northern latitudes when the ecliptic was at a pretty shallow angle to the horizon at sunset, as opposed to the steep angle it is now at sunrise. I had my 80 mm refractor out on Sept 25, but poor seeing was a problem on this refreshingly clear and crisp morning (52°F). However, I was able to see an elongated shape from crescent Mercury's 34% illumination. The similarly-illuminated (29%) crescent moon was higher up in the east. Unfortunately, I was in a near-urban location, so seeing the Zodiacal Light wasn't possible. My best sightings of the morning ZL in the past have been from the relatively dark NJ Pines in October or early November.

P.S. -- I failed to mention it Bob, but another great article!

Great sighting of Mercury's crescent shape, Joe. It's not easy when the planet is so low. Nice to know that even in New Jersey the zodiacal light is visible. I had hoped to see both the aurora and the conjunction this morning, but clouds intervened. Thanks for your kind feedback about the story!

It was really clear this morning (October 6, 2016), so I went to my site with the low eastern horizon near 40°N-75°W. I got up a little later than I planned, but as I pulled up to park at 6:20 am EDT, I could easily see magnitude -1.0 Mercury through my less-than-sparkling-clean windshield with unaided eyes in moderate twilight. Mercury rose at 5:45 am and the sun would rise at 7:02 am. At 6:27 am, I was able to spot Jupiter at 0.9° altitude with 16x70 binoculars, my first sighting of it since solar conjunction on September 26, 2016. I was unable to see Jupiter with unaided eyes.

Hi Joe,
Even though Mercury's starting to plummet, it's rising magnitude has kept it in good view. Yours is the first post-conjunction observation of Jupiter I've heard of. Nice! You probably know this but Jupiter will join Mercury in a close conjunction on the 11th. I hope it's clear! 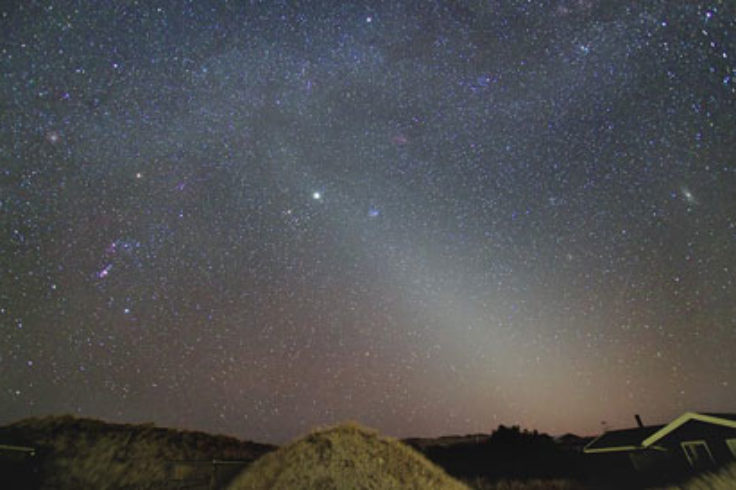 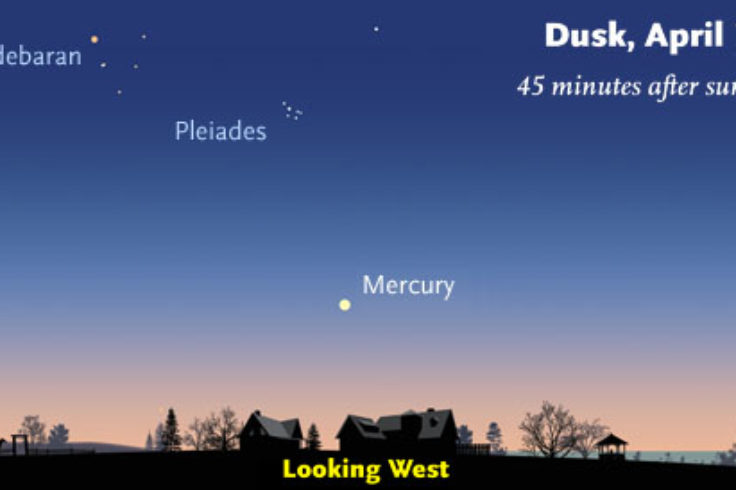 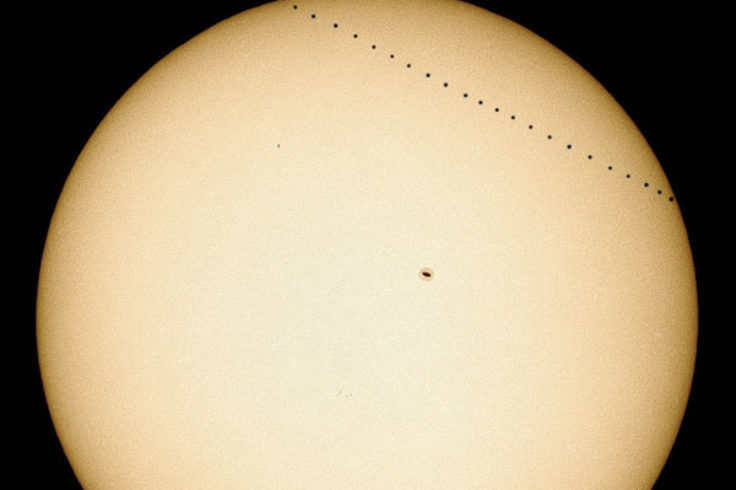 Mercury Transit: Everything You Need to Know 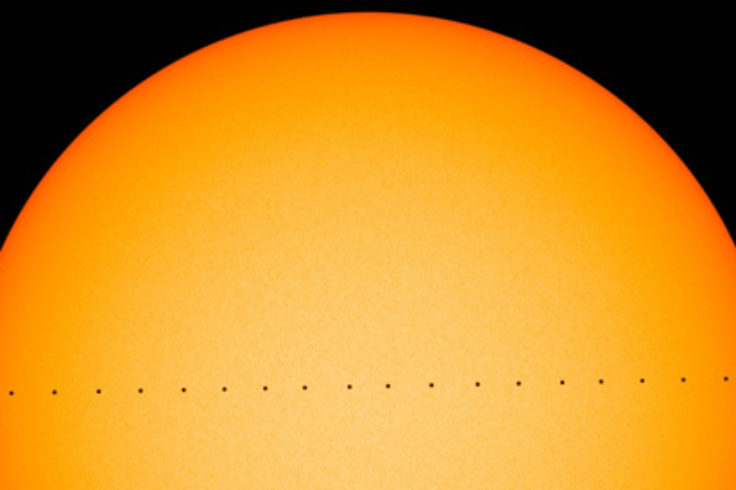