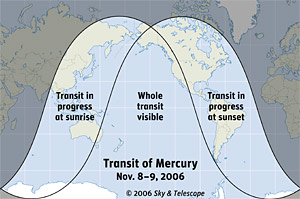 Some or all of the 5-hour transit will be visible from the Americas before sunset on November 8th, and after sunrise on the 9th from New Zealand, Australia, and the Far East.

Usually you expect to see planets at night. But in broad daylight on Wednesday, November 8th, the planet Mercury will cross the face of the Sun. It will be visible in silhouette through a telescope with a safe solar filter placed securely over the front. Mercury will "transit" the Sun for about five hours, looking like a tiny round sunspot creeping westward across the enormous surface of our home star.

Well-prepared observers will see Mercury edge onto the Sun's face around 2:12 p.m. Eastern Standard Time (1:12 p.m. Central, 12:12 p.m. Mountain, 11:12 a.m. Pacific). Watchers in western North America can see the entire transit, which ends when Mercury slips off the Sun's edge at 4:10 p.m. Pacific time. Farther east, the Sun will set while the transit is still in progress. 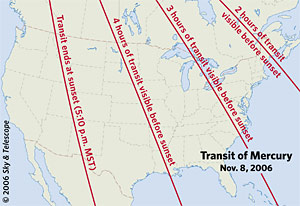 The farther west you live in North America, the better you're positioned to see most or all of the transit.

To see the event, you'll have to be Sun-safe! You can burn a permanent blind spot in your eye's retina by trying to observe the Sun without proper protection — and a telescope makes the danger more intense. You'll need a safe solar filter designed to go over the front of your telescope. Alternatively, you can project the Sun's image out of the eyepiece of a telescope or binoculars onto a white card held a foot or two away; turn the focus knob to get a sharp image of the Sun on the card. For details and illustrations see "How to Watch a Partial Solar Eclipse Safely."

What will you see? Mercury is remarkably tiny compared to the Sun, appearing only 1/200 as wide during this transit. Even so, the little planet is big enough that in a safely filtered telescope, the total blackness of its silhouette can be distinguished from the dark gray of any sunspots that may be present. About 3/4 of the way through the transit (around 3 p.m. Pacific Standard Time; 11h UT) Mercury should pass very close to Sunspot 921 if the spot still survives as of Wednesday. 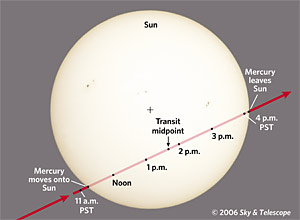 It'll take nearly 5 hours for the innermost planet to glide across the Sun's face. This diagram shows its path, with celestial north up and east to the left. Where you see Mercury make its grand entrance, however, depends on your location.

The transit begins at first contact. This is when Mercury's leading edge first touches the Sun's southeastern edge. The time differs by a couple of minutes depending on where on Earth you're looking from. (For exact predictions at many locations, see NASA's Transit of Mercury website.) Second contact, when Mercury's trailing edge enters the Sun's disk, comes slightly less than two minutes later.

Deepest transit occurs around 4:41 p.m. EST, when Mercury is a little closer to the Sun's center than edge. The transit ends within a couple minutes of 4:08 p.m. Pacific Standard Time, 5:08 p.m. Mountain Standard Time. Farther east, as noted, the Sun has already set.

If the weather is not cooperating in your area, there's always the Internet. Slooh.com is hosting a webcast of the event.

So is the Kitt Peak National Observatory. 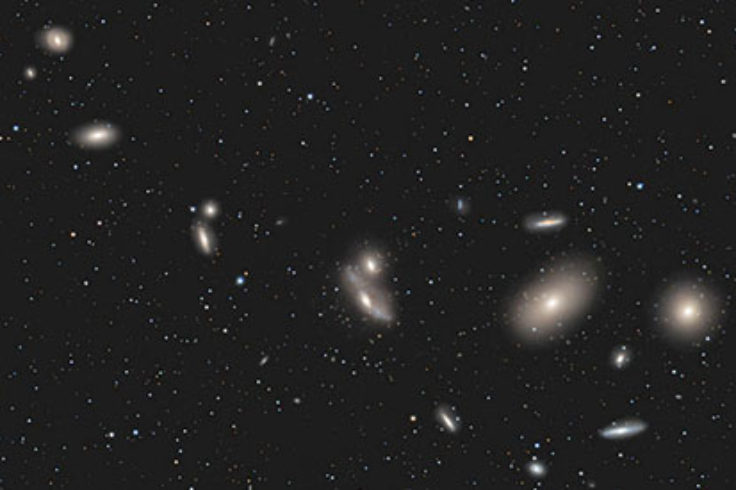