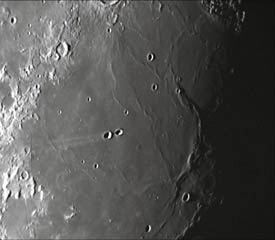 This fine CCD image shows the craters Messier (right) and Messier A at lunar sunset. As noted in the article, the unusual shapes of these craters and the twin rays projecting from Messier A provoked explanations that were as bizarre as the features themselves.

In an instantly classic study, Don Gault of NASA's Ames Research Center and John Wedekind of Caltech reported in 1978 that the shape of an impact crater and its ejecta pattern depend on the angle at which a projectile strikes a target. Using the Ames Vertical Gun Ballistic Range, they shot millimeter-size spheres and cylinders into targets of granite, quartz sand, and volcanic pumice powder at velocities up to 7 kilometers per second. Such experiments had already been crucial to understanding the physics of normal impact cratering, but Gault and Wedekind went one step further and asked, what happens when a projectile makes an oblique impact.

Surprisingly, not much changes until the impact angle is less than 45° (measured from horizontal). But at shallower angles the crater becomes increasingly elongated in the direction of motion, and portions of the projectile ricochet and gouge out a series of small pits downrange from the main crater. As the impact angle changes, the ejecta and rays undergo even more pronounced changes than the craters do. When the impact angle is less than 15°, the ejecta pattern becomes elongated in the downrange direction and a "forbidden zone," where no ejecta appears, develops in the uprange direction. For grazing impacts of just a few degrees, the rays go sideways only, producing a butterfly-wing pattern. Amazingly, examples of all of these exotic ejecta patterns can be found on the Moon, Mars, and Venus.

Oblique impact resolves the mystery of one of the most bizarre crater pairs on the Moon. South of Mare Crisium in Mare Fecunditatis are two small craters with unique parallel rays streaming from one of them. 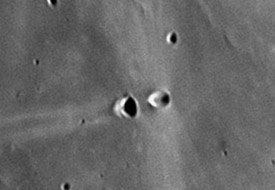 The unusual shapes of the craters Messier and Messier A are well seen in this CCD image by Florida amateur Maurizio Di Sciullo. North is toward the upper right.

Messier is very elongated (15 by 8 km), and the irregularly shaped Messier A (16 by 11 km) has long twin tails of rays that point away from Messier. Previous explanations for this crater pair have ranged from imaginative to fantastical. All were wrong.

In the 18th century, the German physician and astronomer Franz von Gruithuisen proposed that the parallel rays were artificial, while others claimed that sometimes the rays doubled. Additionally, the pair frequently have been reported to change size and shape and to be shrouded in mist. In the 1960s, Valdemar Axel Firsoff believed the crater Messier A (once called Pickering) to be migrating eastward, leaving behind a trail of faint ruins that are the remnants of previous positions. But the most bizarre idea came from the great meteorite collector Harvey Nininger, who proposed that a meteorite crashed through a ridge, leaving a hole on either side. Presumably a tunnel links them. 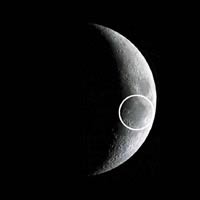 The really remarkable fact about Messier and Messier A is that the scientists Gault and Wedekind were able to beautifully mimic every one of the pair's weird features in laboratory impact experiments. A grazing impact (1° to 5°) of a projectile coming from the east excavated Messier (explaining its elongated shape and classic butterfly-wing ejecta pattern) and another part of the projectile ricocheted downrange to form Messier A and its long rays. Bigger craters formed obliquely too — look closely at Proclus, Kepler, Tycho, and even Mare Crisium. Maybe, on the Moon at least, truth really is stranger than fiction.